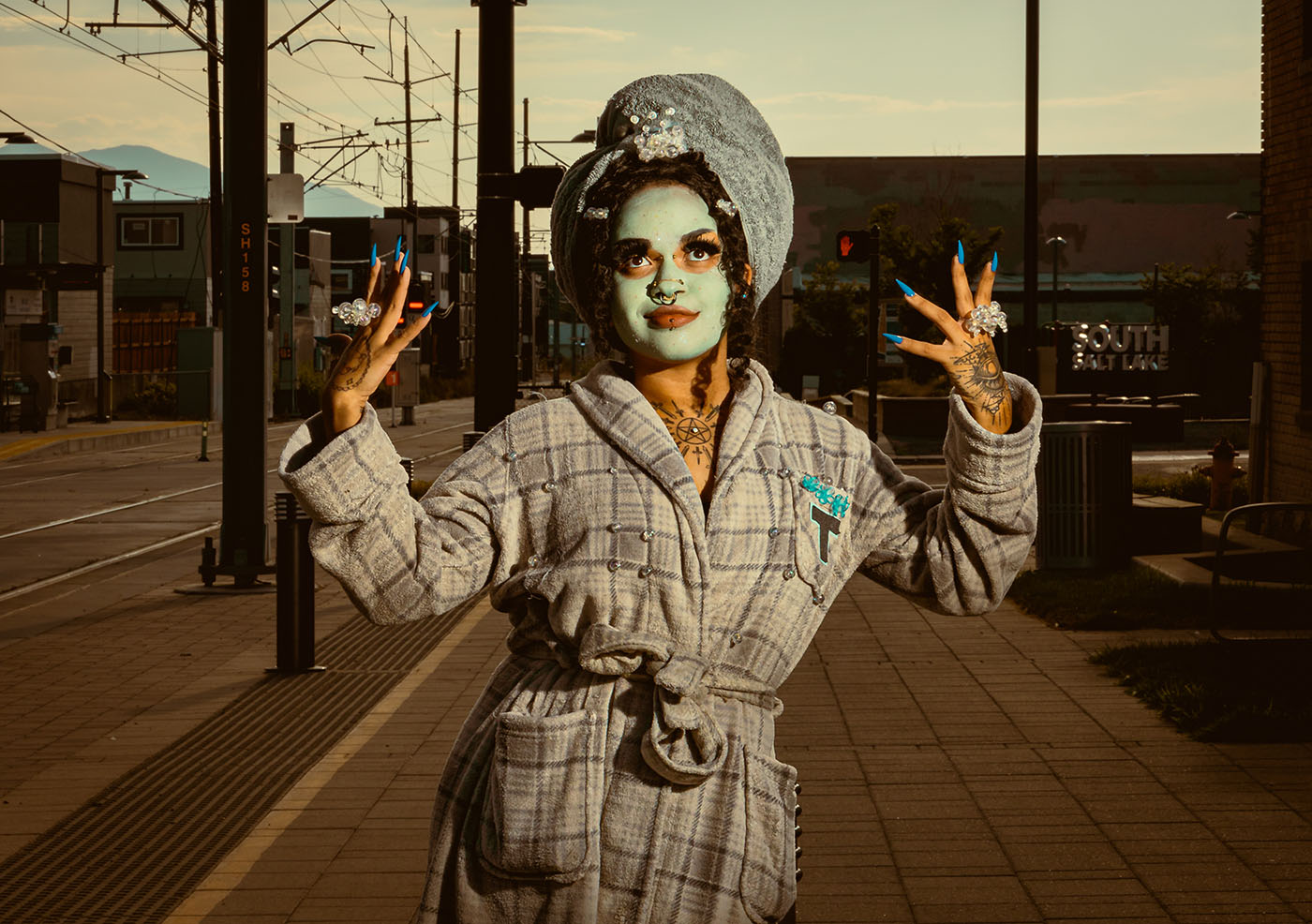 Being in the presence of Terra Flesh is like hanging out with the cool neighborhood kid: They are infinitely stylish, candidly cool and passionately well-spoken. As we chatted in SLUG Photographer Kelly Williams’ studio, I got a sense they were on the precipice of something truly great that would evolve Salt Lake’s drag scene for the better. Between getting lost in their detailed, bath-tub-realness-style makeup and sidetracking into conversations about their former job in haunted houses, Terra and I spoke about personal metamorphosis, the importance of chosen family and future projects.

When Terra was last featured in SLUG’s former Creature Feature series, they performed under the name Opal Ascension. They describe joining forces with the Bad Kids collective and finding a haven of like-minded individuals that introduced them to Salt Lake’s drag scene. But over time, Terra began to see Opal as a boundary for both their art and self-exploration. “As Opal, I was very much identifying as a cis woman, and therefore my drag was a filter of that reality and experience,” they say. “I realized that Opal became a hindrance that held my art in and also was holding my identity in.”

“I just like to get up on stage and make people feel something they could only dream about.”

Instead of succumbing to these self-imposed restrictions, Terra took bold steps to find their authentic self. In 2018, Opal gave one last performance in which they were symbolically laid to rest. “That act was one of the biggest breakthroughs for my art and identity because I basically let Opal ascend,” says Terra. Closing the chapter on Opal, they claimed not one but two new identities. Offstage, they go by Marjani Adamaris, a combination of the Swahili word for coral and the Latin name meaning “noble of the sea.” Grounding themself with elements of nature, Adamaris says Terra was born from the same Earthly energy. “I wanted to become something that was more human, something that was more relatable to my own self,” they say. Using the Latin word for Earth and taking the last name of their drag mother, Eden Flesh, Terra was born.

In parting with labels that no longer served them, Terra felt an unbridled sense of artistic freedom. “Terra is definitely way more versatile, and it’s almost as if Opal became something that fits within that versatility,” they say. Embracing their chameleon qualities, Terra turns out striking thematic looks that range from glamorous to downright bizarre. Sometimes in monochromatic grandeur and other times serving cosmic oddities, every look is both polished and authentically Terra.

Terra’s aesthetic flexibility is mirrored in their performance qualities. Lip syncing to all genres—from obscure French music to Billie Holiday to Skrillex (image mouthing dubstep)—keeps every appearance entertaining. Terra also adds a healthy dose of theatrics, including one performance that broke into powerful spoken word. “I definitely want the audience to dip their toes into the experience that I create for them,” they say. “I just like to get up on stage and make people feel something they could only dream about.”

“That act was one of the biggest breakthroughs for my art and identity because I basically let Opal ascend.”

As an individual, Terra’s creative output is palpable. When combined with their drag collective, Haven of Hues, it is transformative. An all-inclusive community for artists, Haven of Hues welcomes and supports all expressions of drag, performance, fashion and gender. The group has grown to envelop queer performers all over the state—including creatives like The Harlot, Lux Saint Diamond, Chelsea Siren and Kenneth Leon. “We’ve definitely got a full house; there are lots of children, that’s for sure,” Terra says about up-and-coming drag babies. Serving as a chosen family, Haven of Hues has connected Terra with proteges of their own. Drag children Willie Thee Bawdy and Ophelia Flesh are already making strides in their artistic endeavors, and Terra says watching them succeed is a source of pride. “I just really love to see all the talent that I have somehow inspired, and watching them show up and do the damn thing,” they say.

Uplifting local creatives and providing a safe space is important work that Terra hopes to expand. Haven of Hues currently operates out of its primary venue, The Beehive, but Terra is looking to grow its presence. “I’m definitely interested in establishing something else, maybe even getting a business license for my own kind of venue,” they say. Terra is also looking to perform outside of the state, particularly in cities like Chicago and Long Beach. Whatever lies on their horizon, Terra tells me they are a firm believer that great things come to those who work for them: “It’s so important to understand that whatever you hold in the highest regard is completely accessible for you. Give yourself enough credit and support, and you can create whatever it is your heart desires.”

Terra’s tenacious spirit and radiant energy are infectious, and I left our encounter feeling intrigued for the future of Salt Lake’s drag scene. You can experience one of Terra Flesh’s performances for yourself at the upcoming Mx City Limits events by the Provo group Divine Sister-Misters on July 23. Terra will also be at Burning Sissy Valley, a free pride event for queer POC, on July 31. Keep up with Terra on Instagram @terra.flesh and show them some love on Cash App @gothicc.slut.