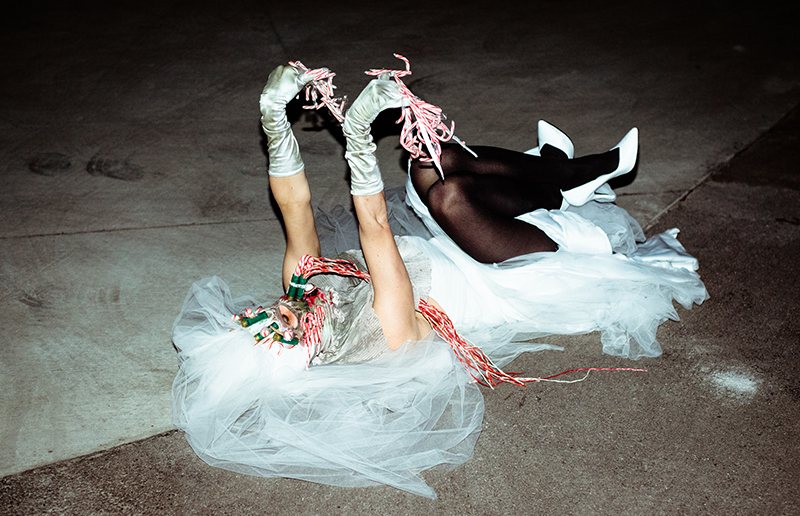 Click images to view captions and in full-size. Photos by Jennifer Thayn.

Standing well over six feet tall, with dark eyes, prominent features and a striking aura, it’s undeniable that Brook Neilson is a remarkable being to behold. A self-taught artist, performer, DJ and filmmaker, she has made her way in a world that hasn’t always saved space for her. So, she made her own.

Brook has spent years working to understand herself and has continually pushed herself to connect with others through her art, the unique way in which she experiences the world. But growing up in Burley, Idaho, in an orthodox Mormon family wasn’t the easiest place to do so. After spending time studying graphic design in Idaho, she moved to Utah County where she studied creative writing at Utah Valley University. In 2011, she decided she would move to Chicago after visiting a friend and realized it was, “the first time I felt like a normal person,” she says.

Living in Chicago was a life-changing experience for Brook. She had been making visual art out of trash and found items for years, but it was in the Windy City that she really fell in love with drag and performing. In the four years of her residence, she met some truly inspirational DJs, performers and artists. After returning to Salt Lake in 2016, Brook began establishing herself not only as an artist, but a live performer and DJ, using mixed media, gender fluidity and a lot of Chicago house music to back her onstage.

Brook has always turned trash into treasure, and even classified her own style of drag initially as “amateur garbage.” Her most recent work was an event called Festive Agony on Dec. 28, 2018, at the vacant Build-A-Bear space in the Gateway Mall. In it, she created her own costumes (she played the sadistic owner of a candy-cane factory of enslaved Christmas elves), produced her own soundtrack and created a backdrop video collage featuring some wild, adult holiday cheer. One of the things I admire most about her is her ability to include so many layers in her art. “I want my work to exist in multiple forms,” she says. “I like the idea of making work that exists in the physical and digital realm. I like the idea of my art having different lives.” She also submitted a film to the 2018 Slamdance Film Festival titled Reunion 1, a beautiful film featuring images of old Idaho haunts, a spooky self-crafted soundscape, and her mom in a swimsuit. Brook has always been bold and unapologetically herself. Recently, she has been submitting her art and films to more festivals and shows, hoping to present more of Brook to the world.

Brook recently came out as a trans woman. I ask what that was like, coming from such a religious background and also residing in Utah. She tells me she was initially surprised by the support she received. We discuss that there are, unfortunately, certain expectations people have regarding what it means to be trans. She says it’s important to not negate a trans woman’s experience simply because she may not be cis-passing. “A lot of people assume that a trans person does very specific things, such as surgery or hormone therapy, and that’s pretty reductive,” she says. “There are women who have beards or big muscles or no boobs. There’s so many intersex people that we would assume are women who have testicles inside of their body. So, it makes sense that transgender people would exist.”

Coming out had its own difficulties, she admits. “Things that were already so difficult to navigate are so much more difficult to navigate in some ways,” she says. But she says that on the other hand, coming into her trans identity has really helped her as an artist. “To be an artist, you have to be the center of your universe. If you don’t know where that is, everything is unanchored and ungrounded,” she said. When I ask her how we, as a community, can better support her and the rest of our trans brothers and sisters, her answer is simple—listen and make an effort to use preferred pronouns. “It just makes you feel like people see you. If people don’t use your name or pronouns or even try, it makes you feel like you don’t exist.” She goes on to say that this is a primary factor for increased suicide rates among our trans brothers and sisters. We both agree that it’s imperative to continually respect and support whoever people want to be. “When you are around those people who can use your chosen name and preferred pronouns, it’s like having air,” she says. “All the times when people don’t consider those things throughout your daily life, they start to pile up on you. So it’s something I think people should keep in mind.”

Brook Neilson is an inspiring and enlightening individual whom I encourage you all to get to know—be it through her art, music, performances or conversations. Support our sister by following her on Instagram @brook_neilson. Also, be sure to check out her upcoming performance at the event Tinfelnane on Jan. 25, at the old Build-A-Bear space at the Gateway Mall. Trust me: You won’t regret letting this one into your heart. She deserves the space.