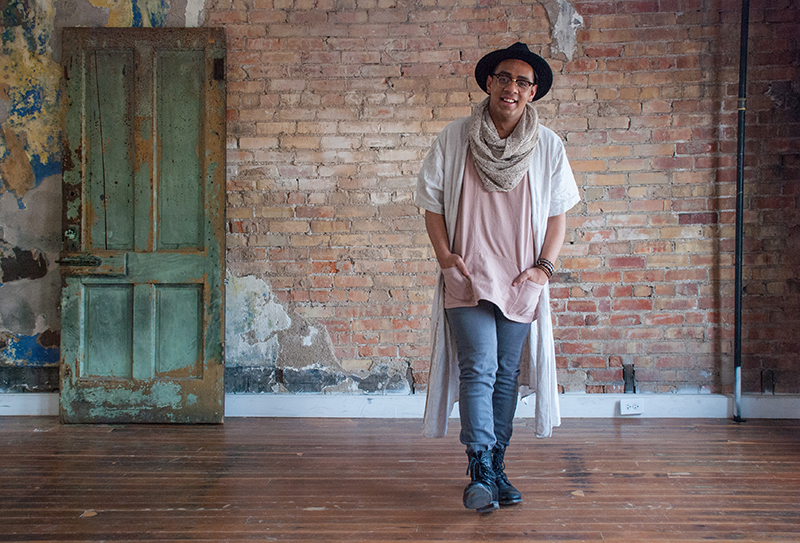 In the fashion industry, trends and fads are constantly changing. There’s always something new hitting the racks at your favorite department store, boutiques and online shops, but what happens to all of the clothes that are given away? Hopefully, they come into the hands of Robin Uata, a designer based out of Provo whose mission is to upcycle used, forgotten clothes into chic masterpieces that anyone could rock—while also helping those in need.

Before making clothes, Uata was focused on helping those in need in the Philippines. His humanitarian efforts consisted of creating hygiene kits, providing school supplies, buying meals and food for families, and helping the sick pay for their medicine. When he realized how much love he had for his cause and the people he helped, Uata realized that this was something he wanted to pursue long-term. After thinking of all of the ways he could fundraise money, he came to a realization that he could take the two things he loves most—helping those in need in the Philippines and making clothes—and merge them together to create Project Kuya. “When I was over in the Philipines, people only thrift,” Uata says. “I felt a deep connection with that because they do exactly what I do. They repurpose things to be what they want, and I felt really inspired by them. Everything is for Project Kuya—not just the clothes. Any money I make from the clothes I create goes straight towards my humanitarian work.” Uata also gets lots of questions about how people can get involved in his project. “I feel like helping others shouldn’t be an exclusive thing,” he says. “I’m never going to turn away someone who wants to lend a helping hand towards the cause.”

“Kuya” is Filipino for “big brother” and is something that Uata carries close to his heart. It’s the concept that’s inspired him the most to continue his efforts in the Phillipines. “Once I got there, all of these little kids ran up to me and started calling me ‘Kuya,’” he says. “Not only was I like, ‘These are the cutest kids I’ve ever seen,’ but I also realized that I will always be a big brother to these kids.”

Although Uata has a busy schedule, he always finds a way to make time for his creative outlet. “It’s pretty crazy, but I’m really passionate about making clothes,” Uata says. “I barely started [Project Kuya] in October, and even though I work a full-time job, I always want go home and make something. Although it’s time-consuming, it’s all worth it.” Even though his brand is very new, Uata is looking forward to 2017 and plans on debuting his creations on DIY’d runways throughout Utah and collaborating with other designers to build more of a presence in the Utah fashion scene.

Uata’s dresses, coats and jumpsuits are all made to hang on the body in a way that not only shows off the vintage flair of the garment, but also brandishes stand-out, trendy, urban touches. From subtle modifications like floral patchwork on sleeves to funky, bold hues or statement pieces like classic military jackets that could also be worn as vests, Kuya brings each piece an unexpected, creative spin.

In addition, since each piece is originally found secondhand and then reworked, all of Uata’s designs are one of a kind.  “In high school, I was constantly wearing thrifted pieces,” Uata says. “I’ve always loved secondhand clothes.” Not only is this passion of Uata made clear through his designs, but it also adds a sustainability aspect to his brand—as well as a touch of originality to each piece. “The fact that all of my clothes are one of a kind creates a demand,” Uata says. “If you like something, it’s highly recommended that [you] buy it as soon as possible because the piece may not be available later. It creates a need for people to keep up with my brand, and that’s really cool.” He took the idea of upcycling and made it his own, creating unisex pieces that people may not have considered wearing before—which is a total gamechanger when it comes to menswear and street style for people of all shapes and sizes. Uata incorporates a global influence to his pieces, too. “I’m going out there in two weeks to find unique materials in the Philippines that I can incorporate into my line,” he says.

For Utah Fashion Week, a series of events that brings together and uplifts the local fashion community, Uata will debut 10 to 12 original pieces on the runway for the Urban/Streetwear Show, held at 6 p.m. and 8:30 p.m. on March 17, at The Falls Event Center. “I’m very excited to emphasize menswear and bring something new to the table,” he says. “Women can always rock men’s wear, but it’s harder for men to incorporate women’s wear into their everyday wardrobes. So I’m hoping to open some eyes and open up the door to where there’s no barrier in fashion. Everyone always wants something new and trendy, but there’s no reason why pieces you already own can’t be made into something current.”