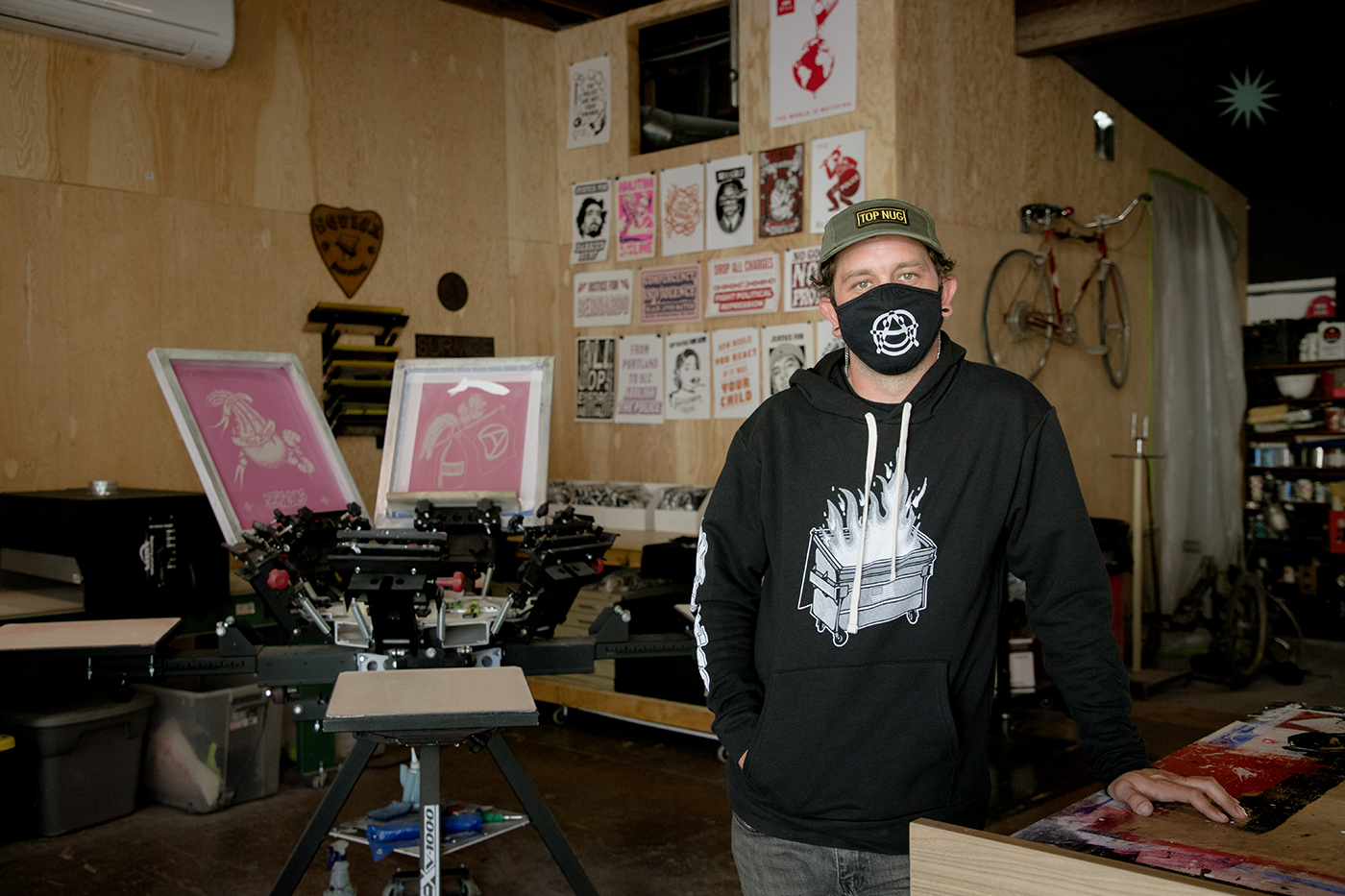 Nick Jones, a graphic designer with roughly a decade of experience, founded the Surmise Clothing Company about five years ago. Before it officially became a company, Surmise was an idea that had been floating around in Jones’ head while he was working on zines about his life and travels and trying to make change in the world. Eventually, he’d pull the trigger on the idea and set up shop near downtown Salt Lake City.

Jones says that people are often surprised when he tells them it’s pretty much just himself working the company. While he does have people that help him and his work, he says everyone involved understands it’s more about Surmise and what it stands for than any specific design or designer. “Our intention never really was to take credit for anything,” says Jones. “It’s more to spread the awareness, spread the message and keep the art being made, you know?”

On its website, Surmise describes itself as “an anarchist screen printing collective” with a goal to “express radical ideas through T-shirt and fashion design.” There’s an obvious paradox with a capitalistic company describing itself as “anarchist” that Jones is more than aware of, saying it’s in this paradox that the company chooses to thrive. “Obviously, I’m a business owner in a capitalist world,” Jones says. “That, in no sense, can reflect what anarchism is. That’s part of the reason this company is called Surmise.”

“The police are not your friends.”

The brand’s website defines the word “surmise” as: “To assume something is true, without having evidence to confirm it.” The company wears its contradiction on its sleeve, as Jones admits that this definition doesn’t entirely add up, allowing the arrogance and paradox to be part of the idea that is Surmise. “Even if we don’t have proof that we can make a better world for all of us, we’re still gonna try,” Jones says, sorting out his thoughts. “That is where Surmise comes from for me—sort of realizing that we don’t really know. We have a lot of evidence and a lot of reasons we believe this, but we don’t really know, you know?”

One of the main issues Jones and Surmise take on in their work is police brutality. The company sells a few popular T-shirts and designs that read, “The police are not your friends.” A pressing question that comes from the issue of police brutality is are all cops bad? Is every single one of them to blame for the obvious unjust and corrupt system that is law enforcement in the United States? “I mean, I wouldn’t say that if I didn’t think that,” Jones says firmly. “They uphold a system of racism that defines them all as that.” It’s pretty black and white for him: If you’re a cop, you’re part of the problem.

However, he does add, “It doesn’t mean that everything about you is bad if you’re a police officer. It means that you are part of upholding a racist unjust system. The way that we have set up the police forces in this country is all bad.” Like the collaborators in Surmise, it’s not about putting the magnifying glass on one person; it’s about taking a look at the larger picture as a whole.

“Justice for everyone. This fight is far from over.”

The big picture for Surmise in 2020 is continuing to take on more social and political issues in the vein of police brutality. Jones and Surmise want to make change through T-shirts and attempt to bring more attention to those kinds of problems in the world. “I’ve tried really hard to focus on only uplifting voices that need to be heard through this movement,” he says. “And to use my platform to share what is going on, as well as raise money for folks who need it—for mutual aid causes, for bail funds and stuff like that.”

Jones wants Surmise to fundraise as much as it possibly can to help alleviate corruption in the world, or at least help to bring awareness to different issues. He knows there isn’t a clear path to the resolution he seeks and that there isn’t even a clear picture to what he is after; however, he does know that there is a desire and a need for change. How will he get there? By not getting too hung up on conflicting details and allowing paradox to light the way. He doesn’t care if it doesn’t make sense. All that matters is that there are issues to resolve and a clear message that needs to be said.

“Justice for Bernardo [Palacios]. Justice for Breonna Taylor. Justice for everyone. This fight is far from over. Really, that’s what I am here to say,” Jones offers as concluding thoughts. “Justice for all victims of police brutality.”