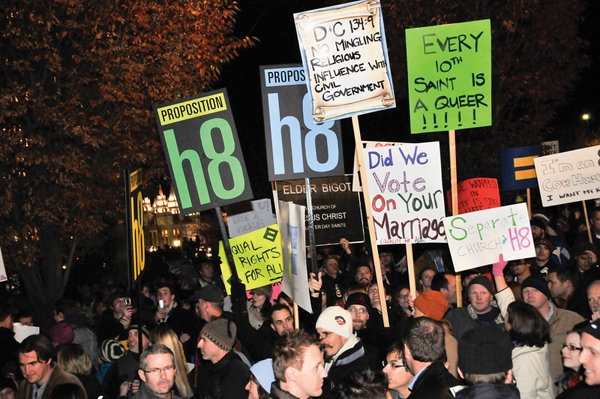 Protesters in Salt Lake City upset over Mormon participation in the California election of Proposition 8 (to outlaw gay marriage) in a scene from the new film: 8: THE MORMON PROPOSITION - A FILM BY REED COWAN

It’s only been 14 months since Proposition 8 (a.k.a. the California Marriage Protection Act) sought and garnered enough voters to concur that “only marriage between a man and a woman is valid or recognized in California” thereby abolishing same-sex marriage and voiding previously conducted nuptials. The support from both sides was phenomenal and unlike anything the issue or country had ever seen. Both sides raised a combined total of around $83 million from all over the world and the item was calculated as being the highest funded campaign ever on a state ballot. To say that tensions were running high is an understatement, but it was the controversial actions of The Church of Jesus Christ of Latter-day Saints’ leaders and followers that forced passions to boil over.

Not only did a significant portion of the donations supporting the proposition, some sources claim 75%, come from LDS sources, but nearly all of the early volunteers advocating door-to-door on behalf of the bill were members of the LDS faith. Furthermore, congregations all over the state set fiscal goals among their fellowships following the distribution of a letter from the LDS First Presidency that read “Do all you can to support the proposed constitutional amendment by donating your means and time.” It was a well orchestrated plan of attack.

On the other side of the country, Reed Cowan, the director of the upcoming documentary 8: The Mormon Proposition, which will make its world premiere at the 2010 Sundance Film Festival, responded to the day’s voting results with mixed reactions. “I was simultaneously watching the glorious win of America’s first black president, seeing a great triumph for those who died in the struggle for civil rights,” he says, “and, at the same time, watching the dreadful numbers coming in from California. It was a profound feeling. Joy over what our nation had accomplished relative to President Obama, and tragedy in seeing that we still haven’t progressed far enough.”

Cowan, a former Utah resident and once an anchor on ABC4’s Good Morning Utah, focuses his latest film (his second documentary feature) on the questionable tactics of the LDS Church and the people who have directly fallen victim to this major setback in the fight for gay rights and tolerance. “When I see an important story not getting told, it feels to me to be a great, great wrong. Nobody else was stepping up to the plate to put Prop 8 and other measures like it on record … so I stepped up.”

Throughout the film’s development, the harsh and sensitive subject matter has taken a toll on Cowan both personally and professionally. “This film dropped a nuclear bomb on my family relationships,” he says. “That and hearing day in and day out for two years the stories of those who are heartbroken over Prop 8 and other things Mormons have had their hands in relative to the LGBT (Lesbian, Gay, Bisexual and Transgender) movement. I’ve been sharing their tears and it’s difficult and painful.” However, as a dedicated journalist determined to unveil the truth no matter the controversies or consequences, Cowan genuinely believes this impassioned rollercoaster of filmmaking is his calling to serve a greater purpose. “I’ve learned that this is kind of my style. I see the fires of pain and I rush in. I find the experience of communicating burning truth delicious.”

The film, still under wraps until its Sundance premiere, has already received an onslaught of criticism and praise with the release of its trailer on mormonproposition.com. Passionate discussions have predicted the film to be everything from “informative” to “an embarrassment,” but not all of the perturbed comments originate from the obvious source. “The Salt Lake City LGBT community, I am told, is worried this film will damage relations between them and the church.” Cowan says, “My feeling is … STOP KISSING THE RING. You’re not invited to the Mormon table as a gay person. You never will be. Set your own table!”

Along with Cowan, the film has attracted many influential gay rights advocates who have helped with the journey to carry the message along to the public. Narrating the project is Academy Award-winning writer and filmmaker Dustin Lance Black who won the Oscar for Best Original Screenplay for Milk in February 2009 and moved the audience to tears with his moving speech about the unconventional love his mother had for her gay son and a forthcoming America with equality for everyone. “Who could forget his Oscar acceptance speech?” Cowan asks. “When I saw him that night on stage, knowing of his Mormon background, there simply was nobody else worthy enough to guide our audience through the scenes of the film.” Also assisting with the progression of 8’s vital message is diverse philanthropist and Salt Lake City’s own Bruce Bastian who has taken on the role as the film’s co-executive producer.

There’s no question whether 8 will spark emotional outbursts and protesting in the frigid air of Park City this year. The heated sounds of conservative demonstrators shouting their religious ideals over the cries of enraged liberals can almost be heard pouring down the slippery sidewalks of Main Street, but Cowan is attending the Festival with a clear cut message with the film he calls “unapologetic.” “People like me are not going away. I’m looking to make certain that every single gay kid who ever felt the sting of bigotry finally gets to know that someone punched a bully on their behalf,” he says. “I’m looking to make certain that every kid who died at the hands of bigotry gets to be a part of my legacy, which is to give meaning to their passing.”

As time moves forward and the appeals to overturn Proposition 8 continue to flow into Californian courthouses, the thought of civil balance reaching everyone anytime in the near future may appear bleaker by the day, but the power of content, according to Cowan, cannot be concealed or ignored. “People who see this film would have to be heartless to, at least at some level, NOT know better and do better after seeing it. The stories in this film compel people to DO better. Better is what I want.”

With that said, the advocates for equality weathering the dreary days currently surrounding the issue may have a real future to look forward to. Not only were the same-sex marriages conducted before the vote allowed to stand in accordance with the Strauss vs. Horton verdict on May 26, 2009 that utilized a grandfather clause for their protection, but anyone familiar with the LDS Church’s wavering stance on controversial topics with the progression of society can see a sliver of light beaming through the cracks. When asked if he could imagine a possible future where the LDS Church would change their opinions toward same-sex marriages and the gay community, Cowan responded, “The LDS Church wants to be liked. They put a lot of money behind achieving that goal.  If enough people in America become sufficiently disgusted at what they have done and what they may continue to do against ANY marginalized group, my feeling is they may be advised by their PR firms to change, and then maybe they’ll change, but not a moment sooner.”

The road to egalitarianism may not be paved smoothly, but the ultimate destination is worth the trip. Fifty-five years ago, the United States Supreme Court decided that segregation in American schools was unconstitutional the same year that Rosa Parks refused to give up her seat on a bus, and now we have our first black president. On Dec. 12, 2009, Houston, Texas elected its first openly gay mayor, which marked the city, the fourth largest in the nation, as the biggest to do so. In light of this monumental achievement for the LGBT community, who’s to say that twenty or thirty years down the road Americans won’t elect their first openly gay president? The strength of America’s democracy will be the critical determining factor and an ambitious Cowan aspires to the best. “We will be the sum total of our choices, and I hope we make good choices.”

The 2010 Sundance Film Festival will run from Jan. 21-31, 2010. 8: The Mormon Proposition has been placed in the documentary portion of the Spotlight section of programming.