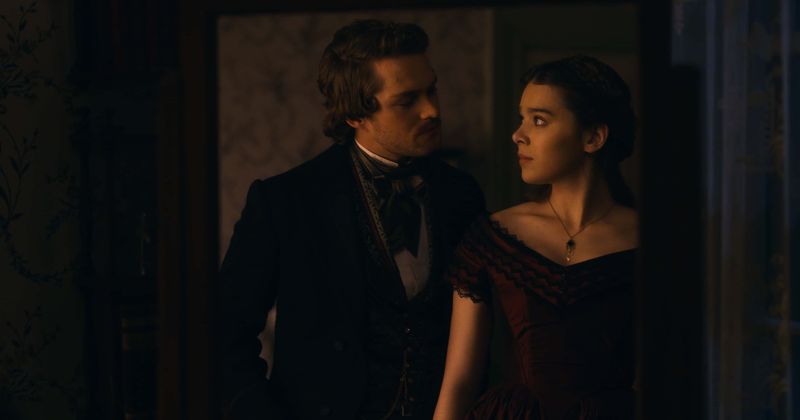 If you like period costume dramas, then Dickinson, which streams on AppleTV+, might be just the show for you—but it’s certainly not the one you’re expecting it to be. This Peabody and GLAAD Media award-winning series, created by Alena Smith, follows the life and times of the great American poet Emily Dickinson, as portrayed by Hailee Steinfeld. While it’s set in the 1850s, it looks at the time through a distinctly modern lens, from deliberately and hilariously anachronistic dialogue and music to progressive sensibilities. In light of Season 2’s finale, three major cast members—Toby Huss, Finn Jones and Pico Alexander—share their thoughts on the new season and how they connected with their characters.

In Season 2, Emily is feeling distanced from Sue—her former lover, now her sister-in-law—who is trying to advance Emily’s career by persuading a young newspaper mogul, Samuel Bowles (Finn Jones, Game of Thrones, Marvel’s Iron Fist) into reading Emily’s poems with an eye toward publication. Meanwhile Sam sees a potential business partner in Emily’s distinguished and wealthy father Edward, played by Toby Huss, who supplied the voices of Cotton Hill and wacky neighbor Khan Souphanousinphone on King of the Hill. Huss also played the role of John Bosworth on the AMC series Halt and Catch Fire, and appeared in blockbusters ranging from Jerry Maguire to 42.

Emily’s sister Lavinia is being pursued by a handsome but controlling—and more than a bit dopey—suitor, Henry “Ship” Shipley (Pico Alexander, Home Again, Catch-22), who is looking for a wife. Big changes are in store for everyone as tensions in the South move the nation closer toward Civil War, which is portrayed through Sam Bowels’ news coverage of John Brown’s famous raid on Harpers Ferry. Bowels’ almost disturbing focus on how the unrest in the nation will help him sell newspapers.

“It was nice to come onto a set and be in the world of comedy because it just allowed everything to have a lot more levity and a lot more looseness to it.”

Huss wasn’t looking for a chance to do historical comedy when he came across Dickinson. In fact, he was actually hunting a serial killer. “I  was shooting Halloween with David Gordon Green,” Huss says. “He was directing that, and he said, ‘Hey, I’m going to direct this pilot about Emily Dickinson, and you know, you kind of look like her father,’ and he pulled it up online and I thought, I do kinda look like that guy!’”

Huss found that a father-daughter dynamic with Steinfeld came easily right from the beginning. “She’s really great, and we like each other, and just watching her work, she’s pretty incredible at what she does,” Huss says. “She’ll dig around and find other elements to a scene and other elements to a relationship, and I really appreciate that … I have a daughter that’s about maybe a year, I think she’s a year older than her, so it’s like my little kid there.”

Jane Krakowski of 30 Rock and Unbreakable Kimmy Schmitt plays Emily’s mother, also named Emily. “She’s real nuts, you know,” Huss says. “She’s always putting a thing on a thing. And it’s hard to do that and keep something real, and what I mean by that is that she’ll have a line reading or she’ll do something physical, and if she does it once, she goes, ‘Great, let’s do it again,’ but she’ll do it a little differently. And every time she does it, it adds more to the character … It’s fun to watch.”

“For me, it really comes down to how we can draw parallels between today’s world and that world.”

Also enjoying the atmosphere on set was Jones. He’s usually associated with heavier fare, but he welcomed the change of pace. “It was really fun, actually,” Jones says. “It was nice to come onto a set and be in the world of comedy because it just allowed everything to have a lot more levity and a lot more looseness to it.”

For Jones, the character of Bowles was an exciting chance to leave a mark on the unique world of Dickinson. “For me, it really comes down to how we can draw parallels between today’s world and that world,” Jones says. “I was very interested in the idea that Sam was this editor of this new technology—you know, the printing press—and kind of drawing parallels between him and someone like Jack Dorsey, who is the owner of Twitter … and that was how I kind of bridged the gap between historical and contemporary.”

Dickinson’s playful tone not only lends itself to great comedy, but allows for some interesting commentary on modern issues, including Emily dealing with her romantic attraction to Sue, as well as her battle to be a recognized writer. “Alena’s pretty adept at that,” Huss says. “And there’s some direct parallels in there in terms of like, this season, with Emily wanting to be famous … and her gender fluidity and dealing with mortality and her idea of feminism, and juxtapose that with what’s happening today.”

“[It’s] that you can draw the parallels between 1850 and today … If you look at it politically, what’s happening, it’s great because we can bounce off today, and vice versa.”

Alexander, new to the series this season, came to his role through his association with actress Anna Baryshnikov, who plays Emily’s sister, Lavinia. The two were acquainted through their involvement in the New York Theatre scene. “I had done a reading of a play that she had written a couple years ago,” Alexander says. “We were also going to be in a play, I think, before that, so she just dropped my name to Alena.”

In contrast to Edward and Sam, Ship is an entirely fictional character. Alexander took advantage of that to go in with his own approach. “He is sort of the comic relief and the clown there, and he is such an oaf and such a dodo, so it was more situational, you know?” Alexander says. “As opposed to coming with a big backpack of ‘This is my character, and these are the things I’m going to do,’ it was more like ‘How present can I be on the day?’”

As Season 2 reaches its conclusion, America finds itself heading fast toward the Civil War, and Huss confirms that Season 3 will delve deeper into playing off of the similarities between that time and the current political climate, with America bitterly divided by political and racial tensions, and even polite social conversation becoming difficult without it sensitive political sticking points.

“It’s one of the reasons [Smith] made the show,” Huss said. “[It’s] that you can draw the parallels between 1850 and today … If you look at it politically, what’s happening, it’s great because we can bounce off today, and vice versa.”

While we’ll have to wait to see how that plays out, you can catch the finale of Dickinson: Season 2 when it drops on AppleTV+ on Friday, Feb. 19.