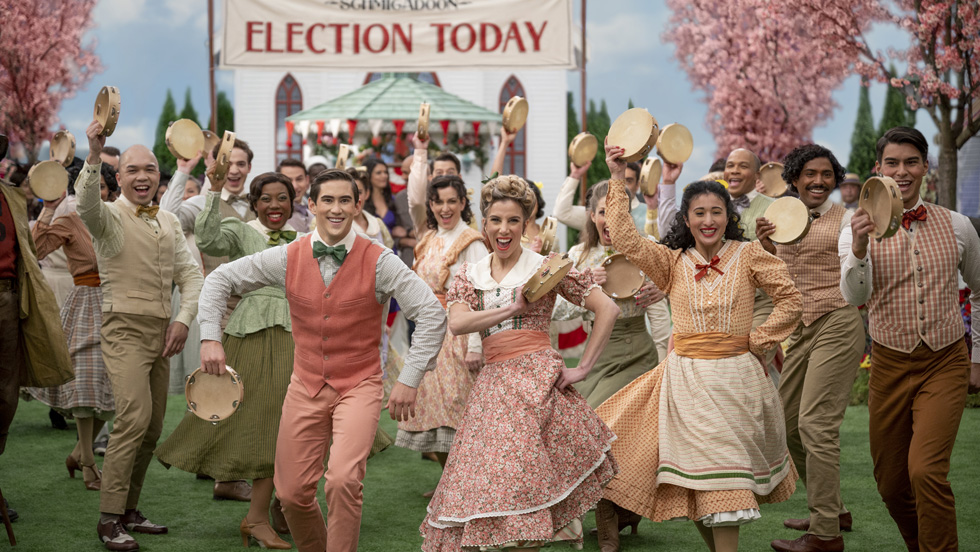 Broadway is currently reopening in stages (I apologize for leading with that), but 2021 is already emerging as a banner year for the musical film genre. In the Heights is already generating Oscar buzz, and Dear Evan Hansen, Tick, Tick… Boom! and, of course, Steven Spielberg’s new version of West Side Story coming later in the year. But one of the most memorable and magical musical extravaganzas is coming to the small screen this month, in the form of the hilarious new AppleTV+ series Schimgadoon!

A parody of iconic musicals, Schmigadoon! is a new musical comedy series created by Cinco Paul and Ken Daurio (Despicable Me), directed by Barry Sonnenfeld, and starring Cecily Strong (Saturday Night Live) and Keegan-Michael Key (Key and Peele, Jingle Jangle: A Christmas Journey) as Melissa and Josh, respectively. The latter two are a couple on a backpacking trip designed to reinvigorate their relationship when they stumble in a magical town called Schmigadoon, in which everyone is living in a studio musical from the 1940s. But getting out of Shmigadoon proves more difficult than getting in, and they can’t leave until they find “true love.” The cast also features Broadway star Aaron Tviet and Disney Channel veteran Dove Cameron.

“Oh, this is a lot like the opening of Brigadoon … but what if those two guys stumbled into a musical?”

“It was almost 25 years ago that I first had the idea for this,” Paul says. “I was watching An American Werewolf in London, and you know how [in] the opening, they’re backpacking over the countryside, and I thought, ‘Oh, this is a lot like the opening of Brigadoon … but what if those two guys stumbled into a musical?’” Twenty years later, after making a name for himself in animation with Despicable Me, Horton Hears a Who and The Lorax, Paul was ready to move into live action, and looking toward television.

Paul met with Broadway Video, run by Saturday Night Live mastermind Lorne Michaels, and they expressed an interest in doing a musical. Paul was suddenly reminded of his long-gestating concept. “I actually got the scores for a bunch of these old golden-age musicals and played through them on the piano, so that as I was composing, I would be familiar with the chord changes and the harmonies that Richard Rogers and Frank Loesser and and these great composers used,” Paul says. “I also just rewatched a lot of these old musicals, and a lot of them aren’t very good, but they have great musical numbers in them.”

The first cast member to come aboard was Emmy Nominee Cecily Strong, who knew, after her first reading of the script, that she wanted to be a part of Schimgadoon! “This show is genuinely so funny, and it’s genuinely so sweet,” Strong says. “And if I feel that way just reading the first script, not even hearing the music, it just felt like it’s only going to get infinitely better, you know?” Strong also served as a producer, a role which she found to be a perfect fit. “I was such a fan of this show, and loved being a part of it, and so it felt natural to want to be involved in further discussions about the whole thing, and not just performing Melissa.”

Barry Sonnenfeld, who has been a top Hollywood director for 30 years, was a natural choice to helm Schmigadoon! “If you know my work, I really like world creating,” Sonnenfeld says. “Whether it’s Addams Family, the Men in Black [films], Wild Wild West, A Series of Unfortunate Events or Pushing Daisies, I’m a big believer in sort of pushing reality.” Sonnefled expresses that recreating the visual language of the old MGM musicals strongly appealed to him as well.

“If you know my work, I really like world creating”

“What I took away from those is shoot dance numbers head to toe, so you can see the whole actor dancing, which I thought was really important,” he says. “So I tried to make it feel both modern and old-fashioned. And then there was a color palette which was very technicolor, very saturated, lots of pastels but nothing too pale.”

The series was shot during some of the most intense months of the COVID-19 pandemic. Tviet—who was on leave from performing the role of Christian in Broadway’s Moulin Rouge!—relished the opportunity to step into the magic of Schmigadoon! in the role of Danny Bailey, the town rapscallion. “It was a very special thing,” Tviet says. “I think that would have been a great job under the best of circumstances, but set to that backdrop, we were getting to do something very, very normal in a time when not many people had that much normalcy, so it just made it that much more special.”

Cameron, best known for Liv & Maddie and The Descendants, plays the role of Betsy McDonough, a beautiful farm girl who threatens to come between Josh and Melissa. Cameron also comes from a stage background, and while she agreed with Tviet that it was a golden opportunity, she did find that it came with challenges. “The camaraderie that happens in a stage production is very, very difficult to have in a setting where we are not allowed to be more than a few people in a room at the same time … but we were still able to have that amazing chemistry and bond that I think really shows through in the show.”

“The camaraderie that happens in a stage production is very, very difficult to have in a setting where we are not allowed to be more than a few people in a room at the same time … but we were still able to have that amazing chemistry and bond.”

The series is an energetic mix of old-fashioned musical fun with modern sensibilities and fresh, new attitude that makes it one of the entertainment highlights of the summer. If you’re going to get lost, you would be hard-pressed to find a better place to do it than in Schmigadoon! It makes its premiere on AppleTV+ on July 16.