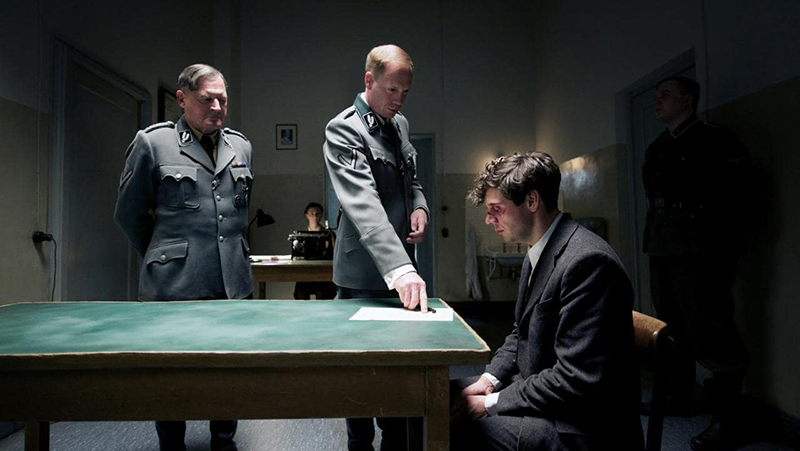 As I’m sure is the case with many filmgoers, I had never heard the name Georg Elser before seeing Oliver Hirschbiegel’s 13 Minutes, which is really a shame. He’s a man who designed, built and installed the time bomb that was meant to kill Adolf Hitler before the escalation of World War II. And it would have worked too—if Hitler hadn’t departed the compromised Munich beer hall 13 minutes ahead of schedule. According to historical transcripts, Elser worked completely alone in this ambitious assassination attempt and was eventually executed in the Dachau concentration camp. But 13 Minutes isn’t so much about the tragedy of Elser’s death as much as it is about the conviction with which he led his life.

13 Minutes begins with Elser’s (Christian Friedel) immediate capture following his placement of the bomb as he was attempting to cross the border into Switzerland. As Nazi officers brutally interrogate Elser, the narrative of Elser’s pre-assassin life flood the screen—every blow seems to knock a new memory loose. We learn that Elser was a musician, liked to flirt with married women and had zero patience for the bullies in his life. His taste for wedded women and his distaste for bullies culminates in his relationship with Elsa (Katharina Schüttler), who happens to be married to an abusive alcoholic dumb enough to let Elser rent a spare room at his house. While sustained flogging and hot needles inserted beneath his fingernails aren’t enough to get Elser to discuss his assassination attempt with his captors, the Gestapo’s intimation that Elsa is in danger does the trick.

Given the fact that a World War II biopic could have become a very safe exercise in period piece construction, Hirschbiegel’s Tarantino-esque fractured narrative makes the film feel fresh. The screenplay, written by father/daughter team Fred and Leonie-Clare Breinersdorfer, offers ample opportunity for the viewer to form their own opinions about the main character’s true motivations. Regardless of whether we think he was a lone gunman standing up against the Third Reich or that we think he was simply trying to prove that he could assassinate its leader, the team behind 13 Minutes tells Georg Elser’s story with tight, innovative filmmaking. –Alex Springer