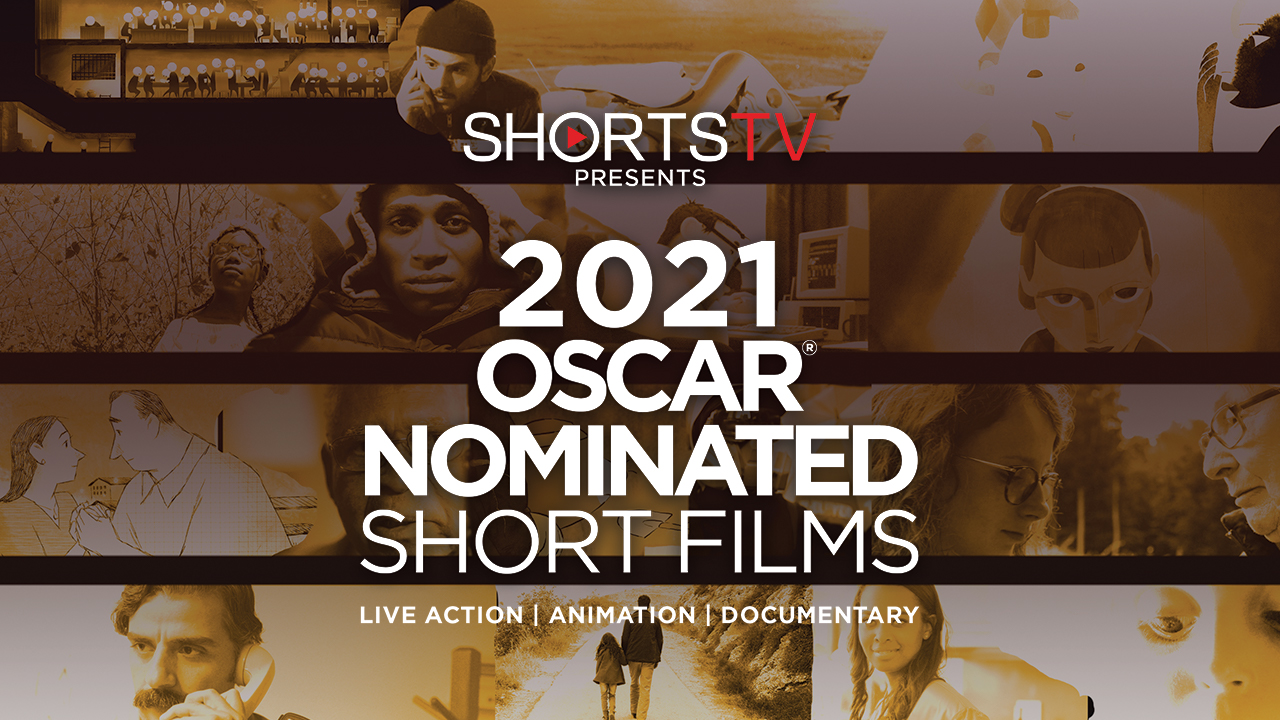 As we prepare for the upcoming Academy Awards, one category—or, to be precise, three categories that are easy to gloss over are the short films. This is because most of us simply haven’t seen or even heard of them. SHORTS TV has made a laudable effort to change this, and the 2021 Oscar Nominated Shorts can be viewed in theaters and online—mostly online this year, if we are being honest.

As a filmmaker in addition to being a film critic, I’m most prolific in the area of making short films because they are easier to get made at a high quality and on a low budget. But as someone who grew up on Lucas, Spielberg, Disney and other epic forms of storytelling, I admit that I have a much harder time writing and developing a short than I do a feature. Even with something smaller and more character-based, short films done right are an art form that requires great discipline, and the ability to find a story that not only works in the format but, ideally, also works best that way is exactly why they are so often done wrong.

Meanwhile, as a critic, I’m just going to say, flat out, that it can be more trying to sit through two bad short films than to sit through 50 bad features, and it’s fair to say that I have a love-hate relationship with the medium. Thankfully, the 2021 Oscar Nominated Shorts is a program of thoughtful, artistically challenging and watchable films that are strong examples of why the medium at its best is so much more than a stepping stone for aspiring feature directors, and which makes me want to make another short film as soon as possible. –Patrick Gibbs 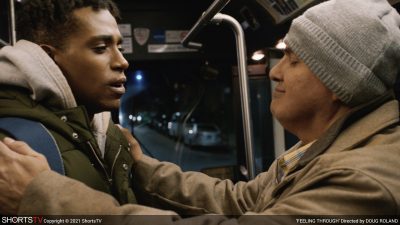 The first film to feature a DeafBlind actor in a lead role, Feeling Through is a coming-of-age story that follows Tereek (Steven Prescod, Blind, An Imperfect Murder), a teen wandering the streets of New York, desperate for a place to crash when he encounters Artie (Robert Tarango), a DeafBlind man in need of assistance getting to a bus stop. Out of an awkward meeting between strangers emerges an intimate bond and a journey that will change Tereek forever.

A low-key and sensitive character piece, Feeling Through is a beautifully acted slice-of-life story that’s the kind of short that emerges as a highlight of any festival. Tarango’s performance is a must-see, though it’s the interaction between the two leads that makes it truly special. Writer-director Doug Roland has broken new ground and created a historically significant work of art that’s a lot more than a gimmick; it’s a moving piece of storytelling that perfectly captures the kind of everyday experience that comes once in a lifetime. 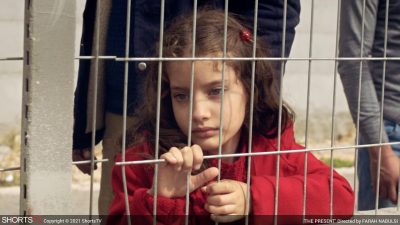 On his wedding anniversary, Yusef (Saleh Bakri, The Band’s Visit, Wajib) and his young daughter set out in the West Bank to buy his wife a gift. Between soldiers, segregated roads and checkpoints, how easy would it be to go shopping?

The Present is a poignant film that’s deeply disturbing, and writer-director Farah Nubulsi hits harder with the constant presence of the specter of violence than many features manage to do with graphic depictions of it. It’s a perfectly constructed, chilling but uplifting tale of courage and the complexity of the Isreali-Palestinian conflict that you won’t be able to forget even if you try. Nabulsi gives the film a far greater impact by focusing less on taking sides than in simply showing us how tense life is for people on the West Bank every single day. The Present is currently playing on Netflix, so you have no good excuse for not seeing it. 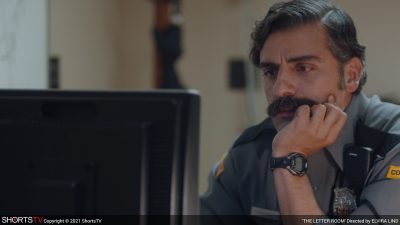 When an empathetic corrections officer (Oscar Isaac, Inside Llewyn Davis, The Star Wars Sequel Trilogy) gets transferred to the prison’s letter room, he soon finds both escape and an added burden in the deeply personal letters written to an inmate on death row.

The Letter Room benefits immensely from the exquisite presence of Isaac, who gives a performance that reminds those of us who have been his enthusiastic fans since the mid-2000s exactly why we said, “Phil, what the hell are you talking about?” when our friend said, “Wow, this Oscar Isaac guy sure came out of nowhere” after The Force Awakens. It’s hard not to wonder how writer-director Elvira Lind (Bobbi Jene) got one of Hollywood’s most promising rising stars to appear in this mini-masterpiece. But when that star is also your husband, one imagines that there are ways of getting through to his agent.

Alia Shawkat (Arrested Development), in a pivotal supporting role, gives a performance that’s sure to leave people saying, “So that’s this Fünke everyone is talking about!” John Douglas Thompson (The Bourne Legacy, A Most Violent Year) is sublime as an inmate waiting for a letter from his daughter. All in all, The Letter Writer, which I strongly believe will land Lind her second “Oscar” (I’m sorry) ranks up there with The Shawshank Redemption and Dead Man Walking as one of the greatest prison films of all time, and one of the best films of any length from 2020. It’s my fervent hope that Lind and Isaac follow this one with a feature collaboration. 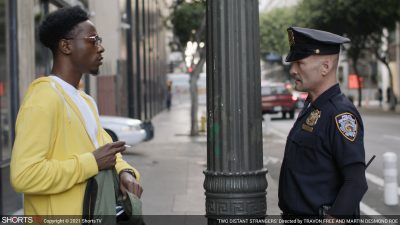 This shockingly bold variation on Groundhog Day is easily the most timely film of the bunch. Cartoonist Carter James’ (Joey Bada$$, Mr. Robot) repeated attempts to get home to his dog are thwarted by a recurring deadly encounter with a police officer (Andrew Howard, Perry Mason, Hatfields & McCoys) that forces Carter to relive the same awful day over and over again.

Two Distant Strangers seems like a well-made film that’s just a terrible and opportunistic idea for the first 10 minutes, but stick it out. Daily Show writer Travon Free and his co-director, Martin Desmond Roe (Breaking2), have turned the time-loop formula into a gut punching metaphor for what it’s like to be Black in America, and the two central performances are captivating, to say the least. I highly recommend checking it out with an open mind. Two Distant Strangers is coming to Netflix on April 9. 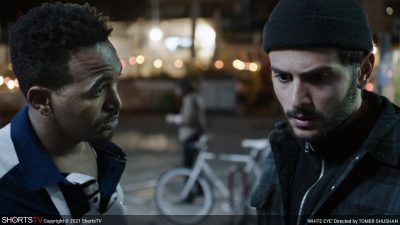 Omer (Daniel Gad, The Damned) finds his stolen bicycle, which now belongs to a stranger named Yunes (Dawit Tekelaeb). While attempting to retrieve it, he struggles to remain human, running into complications when he discovers that Yunes may not have stolen it after all but, either way, is facing bigger problems. White Eye, an Israeli film presented in Hebrew with English subtitles, is a provocative and heartbreaking story that brings the idea of a chance, everyday encounter full circle from Feeling Through, and it’s a powerful and sobering experience. Writer-director Tomer Shushan (A Sight) uses a carefully staged cinéma vérité approach that makes the movie raw and real. His cast is excellent, and White Eye is a haunting story of consequences and regrets.