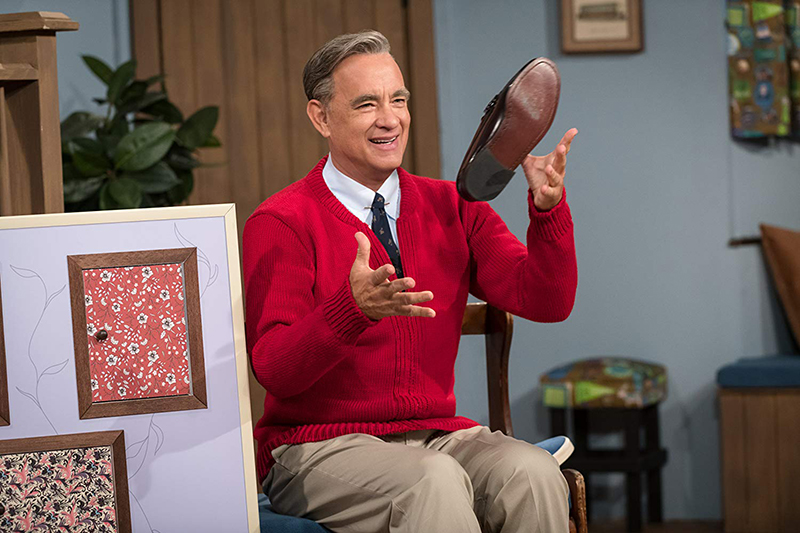 Film Review: A Beautiful Day in the Neighborhood

A Beautiful Day In The Neighborhood
Director: Marielle Heller

There are few public figures more iconic or beloved than Fred Rogers. In 2018, the documentary Won’t You Be My Neighbor? was a surprise hit and my personal choice for the best film of the year. A documentary seemed like the best and perhaps the only way to capture the story of this almost impossibly good man on film, but director Marielle Heller (Can You Ever Forgive Me?) has found an angle that makes it work as a narrative feature. There are two keys to this: One is the choice to tell the story from the perspective of an outsider who was affected by Rogers, rather than to try to get directly inside the point of view of a man whose level of love, patience and compassion seems almost beyond our comprehension. The other is the casting of another American treasure, Tom Hanks, as Rogers.

The film centers around Lloyd Vogel (Matthew Rhys), a cynical writer for Esquire known for his hard-hitting interviews. When Lloyd is assigned by his editor to write a piece on the famous children’s show host, he initially balks at it. But when he meets Rogers, the interview quickly becomes a two-way street as Rogers probes Lloyd about his own life and feelings. The journalist becomes increasingly obsessed with the strength of Rogers and subsequently begins a journey of deep introspection.

Heller has created a truly beautiful film that explores themes ranging from childhood and parenthood to forgiveness, self-love and faith. The story is based on a real Esquire article by Tom Junod entitled Can You Say…Hero?, and Heller takes an approach of simple sincerity, never letting it descend into syrupy melodrama. Hanks performance is crucial to this, as the actor gives us more transformative turns than we are used to seeing, capturing the cadence of Rogers’ speech patterns and his gentle aura without doing a self-conscious impersonation. Rhys makes for a wonderfully low-key protagonist, and Chris Cooper is nothing short of perfection as Lloyd’s estranged father.

A Beautiful Day in the Neighborhood is a rare film that left me wanting to be a better person and grateful for everything I’ve learned and for the love I have benefitted from throughout my life. Can you say … Oscar? –Patrick Gibbs