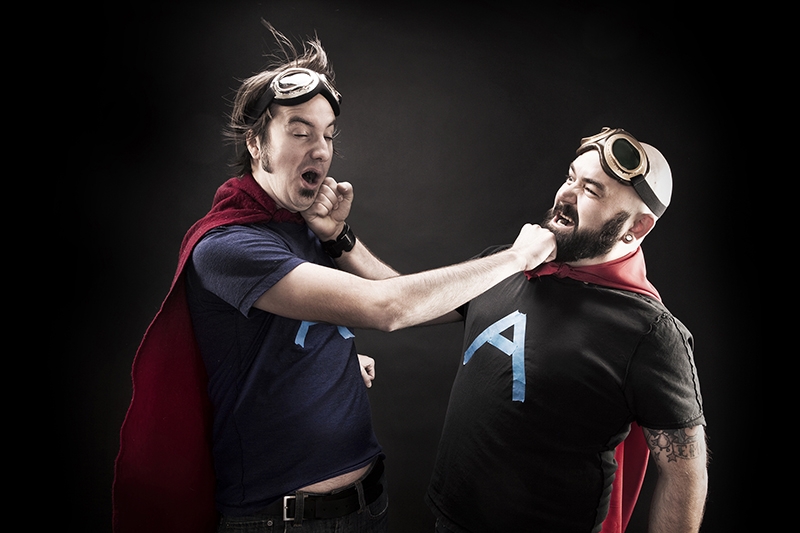 For the past five years, Adam Palcher and Adam Sherlock have been transmitting reviews and Top 5 lists on movies that range from Fritz Lang’s Metropolis to Forgetting Sarah Marshall—with more film industry gossip than you can find in a WalMart check-out line (Tom Cruise is gay?!). A Damn Movie Podcast celebrates its 200th episode this month, along with the duo’s second short film release, Head Over Heels. Check them out for yourself at adamnpodcast.com, and don’t miss the premiere of Head Over Heels on Sept. 15 at Kilby Court.

SLUG: How would you describe your podcast to your favorite actor?
Palcher: Two smartasses invite you to be a fly on the wall as they discuss film history from Citizen Kane to Howard the Duck.
Sherlock: It’s pretty cool, and we have never talked shit about any of your movies.

SLUG: You’re having fans vote on the movie you’ll review for Episode 200. What’s your vote and why?
Palcher: Jaws, ‘cause I wanna see Sherlock pee his pants in fear of a fake shark—and it’s a masterpiece of tone.
Sherlock: I would love to do any of the three, as all three represent the idea of an “epic blockbuster” in a number of different ways. But the problem with both The Godfather as well as Fellowship of the Ring is that they are the first pieces of much larger puzzles, and it would maybe feel a bit lopsided to only review the first of a trilogy. Therefore, I am going with Jaws. Plus, sharks scare the shit out of me.

SLUG: Give us the premise to your biopic.
Palcher: Played by Keanu Reeves, I’d be on a speeding bus where I’d have to dodge bullets to dupe the bad guy by robbing a bank with him in a President Sherlock mask.
Sherlock: I guess I would go with the whole “underestimated by his peers” Karate Kid thing. Or a Joseph Campbell hero journey, if we had a little bit bigger budget.

SLUG: Ideal way to watch a movie?
Palcher: With the filmmakers (a la Sundance) second to Imax Theatre, no 3D.
Sherlock: Sitting on my couch with my wife and two dogs.

SLUG: Elevator pitch Head Over Heels to your favorite director.
Palcher: A real estate agent discovers who people really are as he invades their personal space. We go into the depths of how people present themselves to the world, how people fall in love and the horrors of putting your house on the market.
Sherlock: It’s like Jaws, but in an empty house and the shark is loneliness.

SLUG: Track list for your dream film soundtrack.
Palcher: TV On The Radio – “Young Liars,” QOTSA – “Feel Good Hit Of The Summer,” Jimi Hendrix – “All Along The Watchtower,” Charlie Rich – “Behind Closed Doors,” Radiohead – “Lucky,” Portishead – “Roads.”
Sherlock: Radiohead – “Reckoner,” The Kinks – “Strangers,” Duran Duran – “The Chauffeur,” The Walkmen – “Red Moon,” Depeche Mode – “Waiting For The Night,” Magnetic Fields – “The Things We Did And Didn’t Do,” Ohia – “Lioness,” Three Mile Pilot – “Longest Day,” and I would love to have a scene in a movie where a character does an acoustic cover of “Tonight” by The Afghan Whigs. Or you could just get Crippled Black Phoenix to contribute all of A Love Of Shared Disasters. That would be cool, too.

SLUG: If the other Adam was the lead in a major motion picture, what kind of role would he play and why?
Palcher: Fat Best Friend—that actually could be the name of the movie, too. Wait a second—biopic title?
Sherlock: This is in no way indicative of Palcher’s actual personality, but I love that dude so much I have to throw him a bone and cast him as Jeff Costello in Le Samouraï. He isn’t enough of a loner or as cold blooded, but he would be so damned STOKED to get to play that cool.

Weigh in on the movie review for their 200th episode by voting at adamnpodcast.com or call their voicemail line at (707) 408–2367. Seek them out on Facebook as well, for more updates!