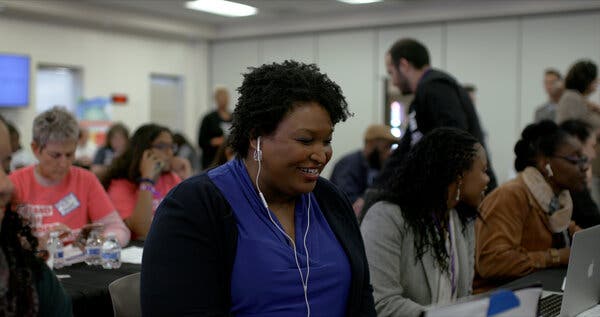 Film Review: All In: The Fight for Democracy

All In: The Fight for Democracy
Directors: Liz Garbus and  Lisa Cortés

Macio Snipes was a veteran who fought against fascism on the battlefields of Europe. So in 1946, no one was going to stop him from exercising the freedom he fought for by voting in the Democratic Primary in Georgia, even if it had been made clear that any black citizen who showed up to the polls was going to suffer serious consequences. He’d faced down the Nazis, and he wasn’t about to be intimidated by thugs at home. Macio Snipes was the only Black person to vote in Taylor County that year. The next day, a firing squad of three men gunned him down outside of his own home.

All In: The Fight For Democracy is more than just a documentary: It’s a wake-up call about the very real issue of voter suppression and the major role it has played in American history, and serves a rallying cry to stop it once and for all. The film is built around the story of the 2018 Georgia gubernatorial showdown between Stacey Abrams, the former Minority Leader of the Georgia House of Representatives, and Brian Kemp, the Republican Secretary of State, who oversaw the very election in which he ran and used every tool at his disposal to keep minorities from voting.

Abrams is one of many key figures who gives us a no-holds-barred examination of the laws and barriers surrounding voting in the United States, and directors Liz Garbus and Lisa Cortés have expertly crafted a film that should frighten you more than any horror movie, exploring how factors ranging from domestic terrorism to the calculated and organized subversion of civil rights laws that have enabled those in power to keep people of color away from the polls. All In shows how prevalent these forces still are today, as well as how the Supreme Court’s 2013 decision to strike down the Voting Rights Act of 1965 enabled us to go from our first African American President to our nation’s capitol becoming home to the White Supremacist House. The film is made up of interviews, footage that ranges from black-and-white archival to clips to video shot in the past months, as well as number of animated sequences that are elegant in their simplicity and stunningly powerful in their jolting effectiveness.

But as upsetting as it is, All In: The Fight for Democracy is also an exceptionally well-crafted and absorbing film that dares to assert that the power of knowledge and the audacity of hope can bring about great change if we all play our part. It’s also not a vitriolic, anti-Republican diatribe, presenting facts, giving fair credit where it is due and rightfully asserting that voting rights are not a party issue, but a people one.

Plainly put, All In: The Fight for Democracy may be the  most important film of 2020, and it is most certainly the only one that I’m literally going to beg you to see, and to visit and share its website, allinforvoting.com. The power of film to educate and to make a difference is immeasurable when used wisely, and Garbus and Cortés are filmmakers with great skill and wisdom. It may sound like a cliché to say that you owe it to yourself to see this film, but it’s the truth, and more importantly, we owe it to each other to watch and to acknowledge and remember the uncomfortable truths that it marvelously presents, and to act on the knowledge that is gives us. –Patrick Gibbs