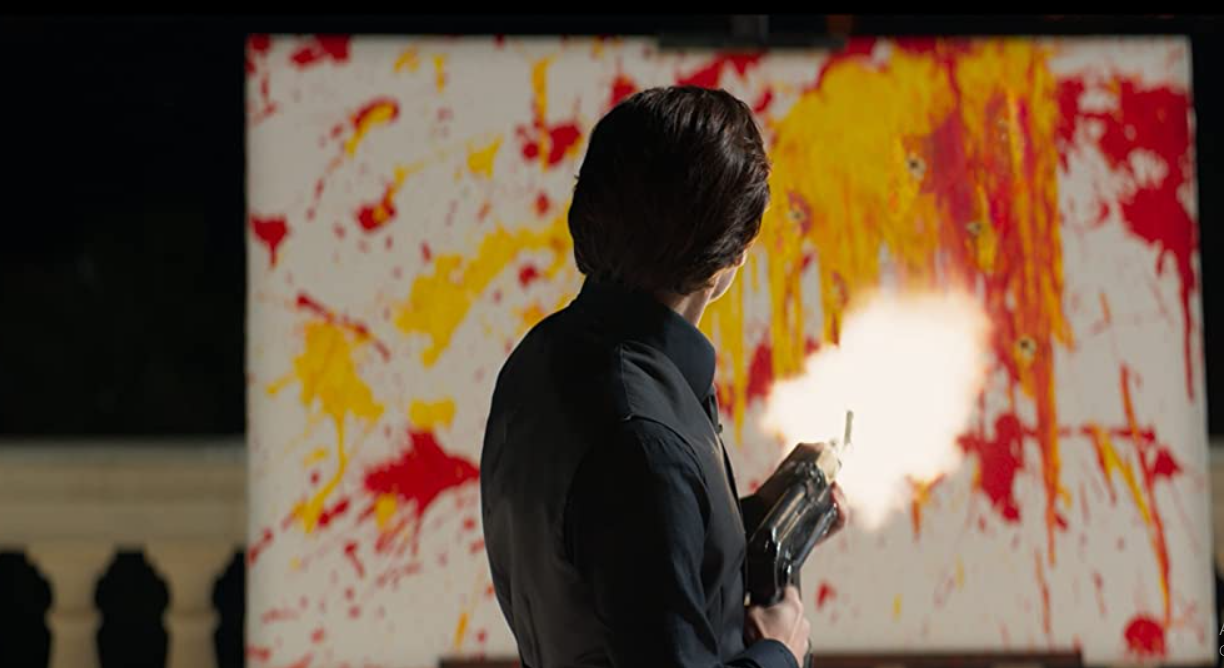 Art + Life = Chaos. That’s the theme at the heart of Alessio Della Valle’s 2021 film, American Night. It’s present in the signs that hang in its main character’s art gallery, in the titles of the three parts which make up the tale and in the narrative itself. However, while chaos, art and life all appear in the film, they unfortunately don’t add up to anything quite as remarkable as the film thinks they do.

American Night opens with a narcoleptic courier named Shakey (Fortunato Cerlino) being given a mysterious and shady package to deliver. As he approaches the drop zone, men in a black SUV (the classic villain’s car) fire at him. Over the course of the film’s two-hour runtime, we learn that the package Shakey is delivering is Andy Warhol’s “Pink Marilyn.” Trying to intercept the painting is Michael Rubino (Emile Hirsch), the newly-crowned leader of the Rubino crime family. An artist at heart and mob-boss in action, the painting was a promised inheritance to Michael (but sold to another party upon his father’s death), and he wants it back.

This isn’t the only story in the film, however, as we are also introduced to John Kaplan (Jonathan Rhys Meyers), an art critic in the midst of starting a global art gallery franchise. John is plagued by relationship troubles with an art restorer, Sarah Flores (Paz Vega), as well as his murky and debt-filled past as an art forger. Along for the action is his step-brother, Vinny—a failing stuntman who studies martial arts at night—played by Jeremy Piven—and a pair of black market art dealers. In other words, the film feels over-crowded.

As promised in the opening title card, American Night is a “tale told in three parts,” with each part following the basic outline of a three-act screenplay structure. Part One (its starting point signified by a neon sign which reads “Art+Life”) introduces us to our lengthy cast of characters in a stylish, albeit sloppy, flurry of setup scenes, ending with Shakey’s loss of the painting as a mix-up sends an oblivious Vinny walking away with it.

The untitled Part Two (its title is the “Art+Life” sign shown from behind but with a bullet penetrating it) pushes the stories forward from that crucial inciting incident, with John and Sarah’s relationship taking center stage as Michael descends into madness. Part Two also shares a lot of flashbacks to give the audience some much-needed context to the movie’s events. Part Three (the bottom half of the sign now comes on, revealing the full title of “Art+Life=Chaos”) is all climax with all of the remaining characters converging at Michael’s house for a massive shoot-out.

The summary given here is doing the plot a lot of favors. There are subplots and flashbacks and montages that would complicate any screenplay, but the film itself complicates things with its use of nonlinear storytelling. Scenes are repeated to establish a timeline and clarify the continuity for confused audience members; however, one can’t help but wonder if this structure was necessary beyond emulating Pulp Fiction. In Tarantino’s film (an apparent influence on this film’s mood board, along with the John Wick franchise), the nonlinear storytelling serves a purpose. In Della Valle’s, it’s there to be cool. As a viewer, it’s frustrating to have to piece together a narrative that could have been told just as well in a traditional, cause-to-effect format.

That isn’t to say there’s no merit at all to American Night’s chaos. Lead actor Jonathan Rhys Myers brings his A-game to the part of John Kaplan, and his performance is easily the best in the film. He’s likable, pitiful and he carries the film emotionally along with Vega—also excellent in her role—as Kaplan’s romantic partner. The set design, costume design, cinematography and coloring are all top notch. The use of bright neon colors and surreal city street sets gives the film a cool vibe, and their exclusivity to the night makes them feel more dangerous than scenes set in the day.

The action is competent but nothing remarkable. There are two huge shoot-outs that bookend the film, and both are visually comprehensible. The first—set in a bar—uses the “fatal action sequence set to a fun pop song” trope that has come around in the last 10 years, but it’s used way too early on in the film. By the end I had forgotten Blondie’s “Heart of Glass” was even in the soundtrack, mostly because the second shoot-out is more emotionally and visually resonant.

Overstuffed and muddled by the nonlinear storytelling, the stylish-yet-mostly-standard American Night searches desperately for meaning. The film wants to enter the discussion of America’s idolization of pop culture and its commodification of celebrity, but it only uses the “Pink Marilyn” as the film’s MacGuffin. It tries to comment on America’s problem with crime, guns and violence—as is evident by the line “Welcome to America” after the shoot out at the bar—but then glorifies it for the rest of the movie because it’s an action crime story and that’s what the genre calls for. American Night wants so badly to be artistic, with an extended monologue about the power of art, a montage of two artists making love on wet paint and a shot of the “Pink Marilyn” on fire, but it doesn’t amount to anything more than the film saying, “Look how artistic we’re being!”

If it wants to be a crime drama about the art world, it does too much. If it wants to be an art film commenting on the state of art, it doesn’t do enough. American Night bites off more than it can chew and leaves a lot of it on the plate as it pursues easier and more familiar territory. –Max Bennion