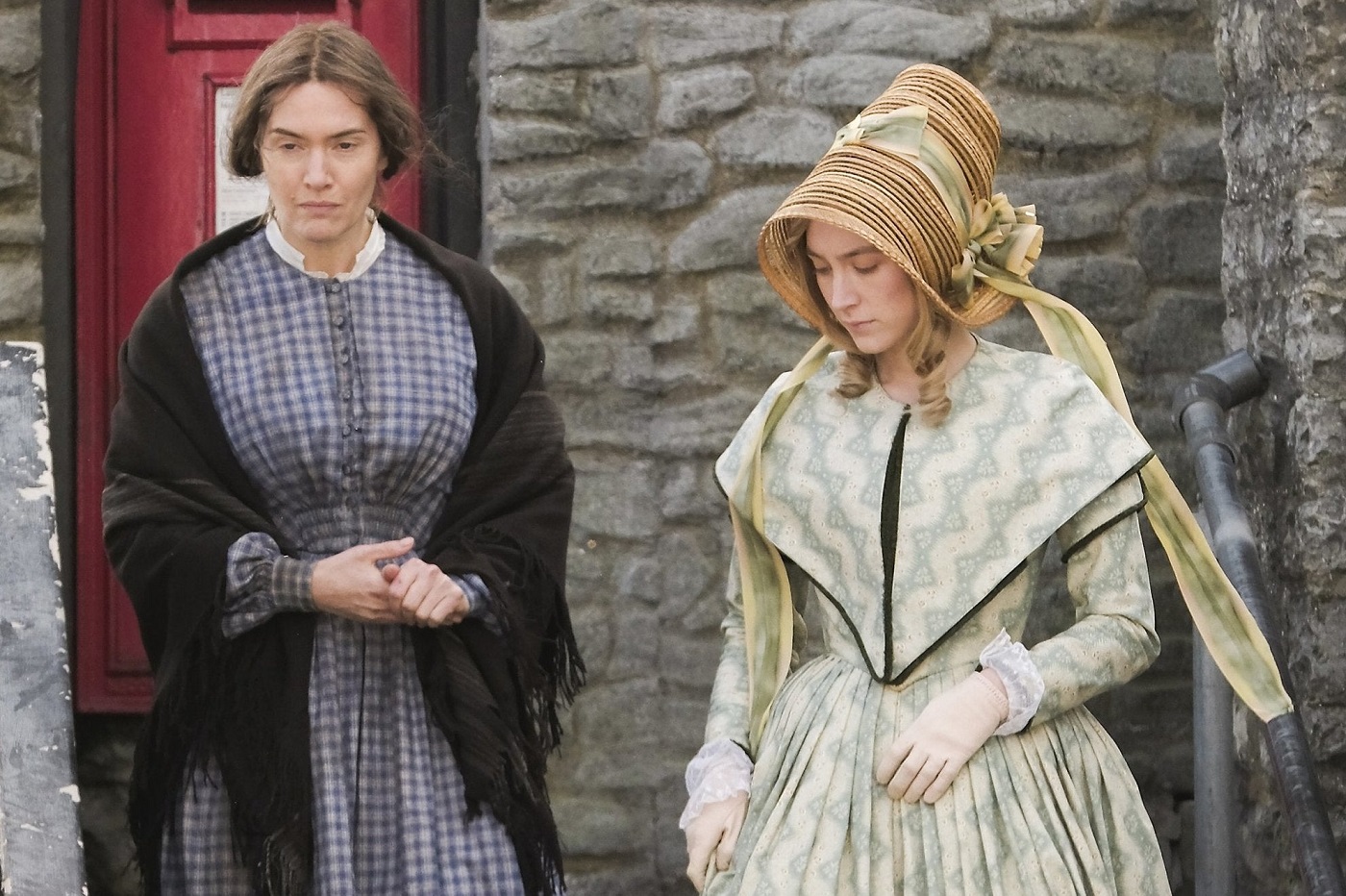 The term “Oscar bait” tends to get thrown around a lot this time of year, but I think it’s important to make a distinction that not all serious dramas released in November and December with the Oscars in mind are equally deserving of this derisive nickname. An “Oscar bait” movie feels tailor made to win awards, particularly for its lead actors—as opposed to being made with the primary goal of making a great film. It’s the kind of film that Harvey Weinstein used to specialize in, and which was so memorably mocked in Tropic Thunder.  And if you’ve got Kate Winslet and Saoirse Ronan in the same film, chances are better than not that the hook is entering the water.

Ammonite is set in the 1840s on the Southern English coastline of Lyme Regis, where acclaimed famed paleontologist Mary Anning (Winslet) hunts for fossils and sells her finds to wealthy tourists to support herself and her ailing mother (Gemma Jones, Sense and Sensibility, Bridget Jones’s Diary). A geologist named Roderick Murchison (James McArdle, Mary Queen of Scots) is touring Europe with his young wife Charlotte (Ronan), who is recuperating from melancholia, and he concocts the idea to leave his wife in Mary’s care for four-to-six weeks while he finishes his journey—he is, of course, prepared to pay handsomely. Mary reluctantly agrees, and she clashes with Charlotte almost immediately. But events unfold that draw the two women together first as friends, then eventually as passionate lovers.

Writer-Director Francis Lee (God’s Own Country) has drawn controversy around himself over this piece of highly speculative historical fiction. Anning and Murchison are real people who shared a close friendship, and though little is known about Anning’s private life beyond that she remained unmarried her entire life, there is no evidence to suggest the two women had a sexual or romantic relationship. My personal feeling on this is that there is not only no evidence that P.T. Barnum spurned Jenny Lind, and in fact, most historians agree that she found him to be quite odious, which is supported by the fact she was a big-hearted philanthropist and he was an unimaginable bastard. It’s also very unlikely that Isabella of France bore a child by William Wallace as depicted in Braveheart, as she was only four years old at the time of his death and living in an entirely different country, and they gave that movie an Oscar for Best Picture.

My point is that these kinds of wild liberties are taken in historical dramas all the time, and if you object to any and all fictionalization, that’s fine. But if the implication of the objections is that we can make up whatever we want, until it crosses a slanderous line when we make up someone being gay … well then, I’d agree with you if you were right.

The acting is the reason to see Ammonite, with Winslet and Ronan doing their usually excellent work, and they have a strong chemistry together (though it’s unlikely to be remembered as a career best for either of them). The characters seem to be deliberately underwritten, and it took me most of the film to start to really feel any attachment to them. Fiona Shaw (the Harry Potter series, Enola Holmes ) is very memorable in a supporting role as someone from Mary’s past, and this plot element provides some of Winslet’s best acting as well.

The film tends to have trouble finding its footing at times, and while I cared about the characters, I never bought that they were in love—merely that they are both very lonely—keeping me from fully connecting with the movie. And whether it’s working forever to slowly scrape the dirt and grime off of a fossil or a glass (invisible) barrier separating the two women from each other, Lee uses symbolism like a sledgehammer to skull, but it seems tentative and restrained compared to the way he approaches the sex scenes. These could could certainly be called daring, but audiences should be prepared for the fact that little is left is left to the imagination, to the point where it feels almost like an instructional video for the most sheltered and repressed members of the audience,  pushing the boundaries of the R-Rating without crossing over them. It’ s not quite Blue is the Warmest Color, but it’s definitely on the balmy side of turquoise, and easily offended viewers are probably going to find it’s too much for them.

Ammonite is likely to be an also ran in the Oscar race this year, but it’s pretty and slickly done, and worth the investment of time if you’re a serious fan of either or both of the accomplished leading ladies. –Patrick Gibbs