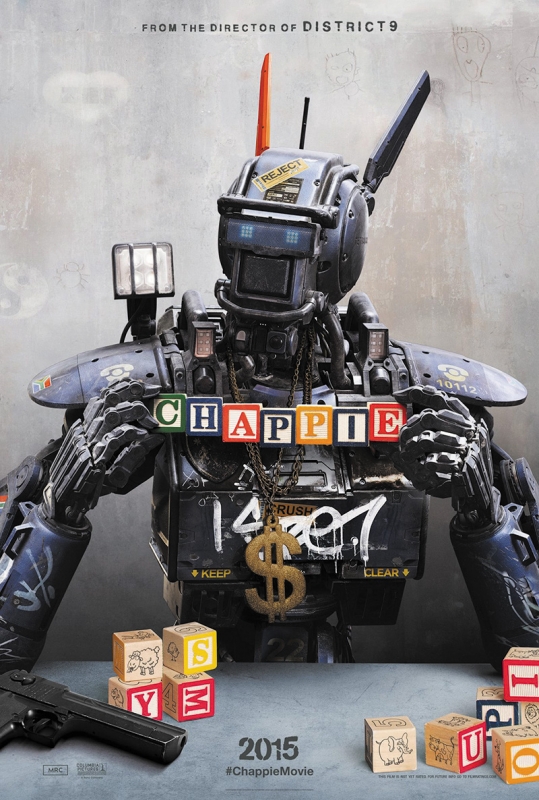 Chappie
Director: Neill Blomkamp
Columbia Pictures
In Theaters: 03.06
Neill Blomkamp is one of the most creative directors working today. You can look at three frames of any of his films and, as with a painter’s brushstroke, know his unique creations. In Chappie, Deon Wilson (Dev Patel) has created software to give robots consciousness. After uploading it to a defected police support unit (later named Chappie), he is kidnapped by thugs (Die Antwoord’s Yolandi Visser and Ninja) who teach Chappie their own ways of life. On the sideline is Vincent Moore (Hugh Jackman), whose own robotics division has been reduced in funding due to Wilson, and he will stop at nothing to regain his status. Blomkamp, as always, delivers a rugged yet believable glimpse into the future with special effects that do not go too far from reality. Sharlto Copley offers an amazing motion-capture performance as Chappie, as he essentially goes from imitating a newborn to becoming a rowdy teenager to maturing into a self-aware being questioning his own mortality. It’s truly incredible. Anytime musicians announce they’re starring in a film, I immediately get nervous, but Yolandi and Ninja, who are basically playing themselves, don’t drop the ball with their performances. There are a few character flaws and questionable decisions regarding unnecessary violence, but Blomkamp pays homage to other sci-fi robot films like Robocop and Short Circuit while adding his own dash of originality to the mix. –Jimmy Martin

Cinderella
Director: Kenneth Branagh
Disney
In Theaters: 03.13
I think everyone is born knowing the storyline to Disney’s beloved animated adventure: evil stepmother, fairy godmother, glass slippers, prince, happily ever after, the end. With that said, that’s exactly what director Kenneth Branagh delivers with his liveaction adaptation. Downton Abbey star Lily James dons the legendary slippers and lights up the screen with her adorable charm, but it’s the always alluring Cate Blanchett who steals the show as the evil stepmother. You honestly want to jump through the screen and strangle her for how devilishly wicked she behaves. In a time when other adaptations are modernizing their franchises with epic battle sequences, Branagh stays true to the storyline and just brings the characters to life. It’s a simple fairy tale. However, a tale like this can become stale with a longer runtime, and I started to feel it just before the credits. It doesn’t ruin it, but it could use a trimming. The costumes and effects are incredible, and, for once in a long time, I found myself enjoying Helena Bonham Carter. She’s almost unrecognizable as the Fairy Godmother. Maybe she should shed the Hot Topic look more often, because it definitely works. –Jimmy Martin

An Honest Liar
Directors: Tyler Measom, Justin Weinstein
Abramorama
In Theaters: 03.16
In the first minute of meeting James Randi, it’s clear why directors Tyler Measom and Justin Weinstein would want to develop an entire film about his life. He’s charismatic, brutally honest and entertaining as hell. Randi, better known by his stage name, “The Amazing Randi,” had a wonderful career as a magician but has made a later life decision to make it his goal to debunk frauds who prey on gullible individuals—frauds such as televangelists, supposed psychics and channelers. A well-rounded group of individuals praise Randi’s efforts, including Alice Cooper, Penn & Teller, Bill Nye and Adam Savage, and reveal how his career influenced theirs. Measom and Weinstein lead viewers into Randi’s elaborate schemes as he proves others’ lies and deceptions. It’s like the viewer is in a heist and a member of the team. Along with Randi’s professional life, audiences are brought into his private life and shown another side of the magnetic illusionist with his partner, Jose Alvarez. A great documentarian can roll with the punches when unforeseen circumstances arise during the filmmaking process, and, without ruining the surprise, Measom and Weinstein perfectly capture their astonishing hurdle without missing a beat. –Jimmy Martin

The Divergent Series: Insurgent
Director: Robert Schwentke
Lionsgate
In Theaters: 03.20
I must be getting old, because all of these young-adult novel adaptations are starting to mix into one big cluster, and I don’t know where the sorting hat ends and the five factions begin. Unlike the need to spend the majority of the running time with character introductions in its predecessor, director Robert Schwentke’s production hits the ground running as Tris (Shailene Woodley), Four (Theo James), Caleb (Ansel Elgort … best name ever) and Peter (Miles Teller) must hide from Jeanine (Kate Winslet) and her army after revealing Tris’ true abilities. Woodley continues to give young girls a character to look up to in this era of Hollywood where females receive only a fraction of leading roles, but, as with the first movie, the storyline feels so clichéd with all of the other Y.A. movies out there. There is definitely more action in this chapter, and Woodley and James (along with his eyebrows) convincingly show off their physical abilities time and time again. If you play a drinking game where you take a shot every time James clotheslines a baddie, you’ll be dead before the credits roll. Where the series started off slow, things are finally happening, and the cliffhanger at the end makes you want next year’s Allegiant: Part 1 here sooner rather than later. –Jimmy Martin

Run All Night
Director: Jaume Collet-Serra
Warner Bros.
In Theaters: 03.13
Since the release of 2008’s Taken, I think Liam Neeson just walks from set to set in the same costume and pretends to be the same character, and director Jaume Collet-Serra isn’t helping the situation, since this is their third time working together. This time around, Neeson stars as Jimmy “The Gravedigger” Conlon, a mob enforcer with a list as long as my arm with the names of people he’s killed. After the death of his wife, Jimmy is a depressed drunk and the butt of the joke with everyone around him except with his lifelong friend/mob boss, Shawn Maguire (Ed Harris). After an unfortunate series of events, Jimmy is forced to kill Shawn’s son to protect his own. This does not bode well, and all friendships are off the table. Now, Jimmy and his estranged son, Mike (Joel Kinnaman), must survive the night with a ruthless mob, dirty cops and a professional hitman (Common) on their tail. The ONLY reason to see this clichéd endeavor is for the interactions between Neeson and Harris. It’s intriguing to witness the protagonist and antagonist sit inches from each other at a restaurant table while cordially threatening each other’s life. Other than that, you’ve seen this movie a million times, and it feels as though it should have been released two decades ago. –Jimmy Martin