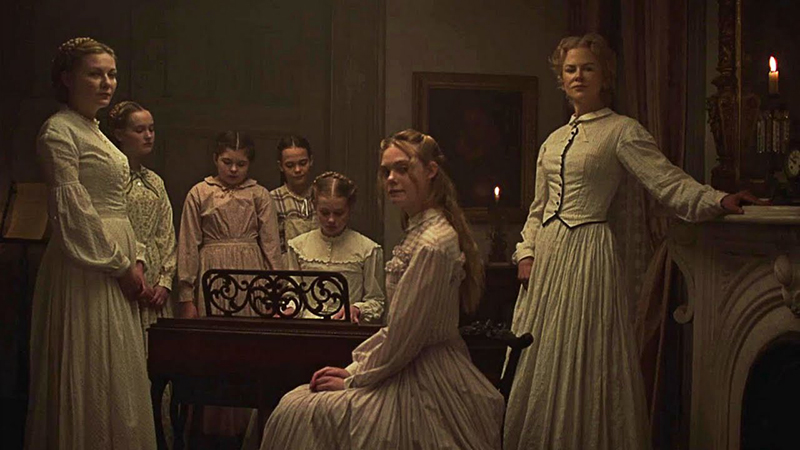 The last time Sofia Coppola made a period piece, we got the visually stunning but tonally scattered Marie Antoinette, which made me half-expect The Beguiled to be a Southern gothic set to the music of New Order. While the Southern gothic aesthetic clings to every scene like Spanish moss, The Beguiled is curiously free of Coppola’s hip taste in music. It’s an absence that hints at a director who has matured since her days of trying to work the right Siouxsie and the Banshees song into a scene.

Coppola adapted the film from Thomas Cullinan’s 1966 novel, which also served as the source material for Don Siegel’s 1970s adaptation that starred Clint Eastwood. Despite the fact that Coppola has cited the novel as the basis of her film’s screenplay, there’s no way she didn’t know what a ballsy risk it was to give us the feminine perspective of a western from the team who brought us the hyper-masculine Dirty Harry. Though Coppola has come under fire for omitting the novel’s African American characters in her adaptation, The Beguiled made enough of an impact at this year’s Cannes Film Festival for Coppola to snag the award for best director.

Controversy aside, there’s a reason that Coppola was recognized at Cannes. With its elegant cast of demure Southern belles, The Beguiled feels like a spiritual successor to The Virgin Suicides. Rather than being imprisoned within the walls of a conservative suburban home, the women of The Beguiled are imprisoned by both the Civil War and a patriarchal mandate that young ladies need to be taught their place in the world. Miss Martha Farnsworth (Nicole Kidman) runs an all-girl boarding school meant to do precisely that, even while the Civil War rages forth mere miles from their doorstep. The only suitors close enough for them to impress are viciously trying to slaughter each other, but Miss Martha is a committed woman. Her young students stick to their strict schedule of embroidery and prayer readings despite the thunderclaps of cannon fire that fill the air around them. While a younger student named Amy (Oona Laurence) is gathering mushrooms in the woods, she stumbles upon Corporal John McBurney (Colin Farrell), a Union soldier with a badly injured leg. With nothing but the best of intentions, Amy guides McBurney back to the school where he can be cared for—despite the fact that he is a Yankee soldier deep in Southern territory.

Once McBurney is introduced to this isolated group of women, it’s not difficult for him to use those rugged good looks and that Irish brogue to gain the adoration of his benefactors. Farrell’s wolfish smolder is enough to sow a fair share of psychosexual chaos among Miss Farnsworth, the beleaguered teacher Edwina (Kirsten Dunst) and veteran student Alicia (Elle Fanning), who is in the middle of her own sexual awakening. From McBurney’s perspective, getting a leg full of shrapnel and deserting his regiment was nothing short of a miracle since it led him to a house full of women who busy themselves by providing him food and sponge baths. Coppola’s understanding of this quintessentially male fantasy scenario is precisely what gives the film a castrating bite when things go south for McBurney. Fantasies tend to shatter when toying with the affections of women.

It takes The Beguiled a while to reveal its darker aspect, but when it does, we’re treated to a morbidly comedic thriller that shares ground with Stephen King’s Misery. Farrell’s transformation from wounded puppy to cornered alpha male is fantastic, and it’s spellbinding to watch Kidman, Dunst and Fanning devise their cunning machinations beneath a guise of genteel Southern propriety.

Unlike Misery, there is no clear cut protagonist or antagonist in The Beguiled, lending a tasty bit of ambiguity to the film’s title. Everyone in the film is well acquainted with self-deception, but it’s only when they face the unexpected—and that unexpected happens to be extremely desirable—that the passions repressed by war and conservatism emerge to sweetly trick them into thinking that they can get what they want. –Alex Springer