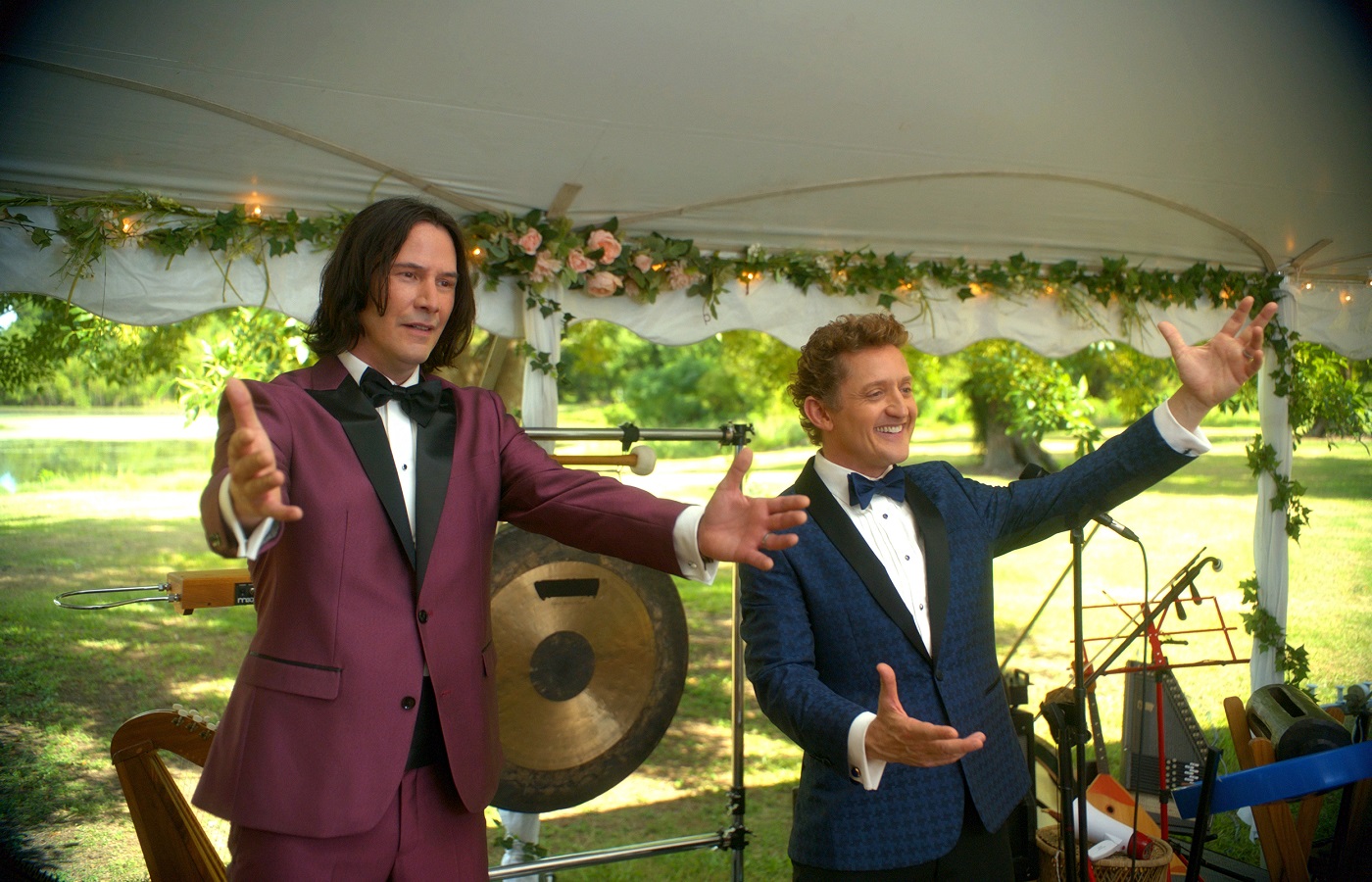 Hammerstone Studios
In Theaters and Streaming on Video on Demand: 08.28

There are some movies—right now, a lot of them from the ’80s and ’90s—that achieve a certain classic status, but are not genuine “classics” in the sense of being great films. Footloose, for example, is undeniably a pop-culture icon, but it’s not a great movie. It’s not even a good one, if we are being remotely honest. But Bill & Ted’s Excellent Adventure, a goofy, sci-fi teen-slacker comedy from 1989, is a hit that genuinely holds up as one of the great comedies of its time. Ok, so it’s no Casablanca, but it is smart, funny and inventive, and the messages of “Be excellent to each other” and “Party on, dudes” have stayed with us all for decades.

Its 1991 sequel, Bill & Ted’s Bogus Journey,  on the other hand, has a certain cult status and gets a lot of love from devoted fans, but it’s a prime example of “twice the budget, half the creativity” filmmaking. It’s a total mess that has trouble settling on a coherent story, and times it’s completely aimless. However, it does feature some very funny moments, most of them built around the zany parody of Ingmar Bergman’s The Seventh Seal and the most triumphant performance of the great William Sadler (The Shawshank Redemption, Die Hard 2) as Death, a.k.a the Grim Reaper. It’s a movie you kind of have to  love in spite of all of itself.

Bill & Ted Face the Music picks up many years later, with our heroes wrinkled and more full around the middle, but still the same old lovable losers. Despite their moment of superstardom signaled by the ending of the last film, Theodore “Ted” Logan  (Keanu Reeves) and Bill S. Preston, Esq (Alex Winter) have yet to fulfill the prophecy to write a song that would unite the world and all of society.

Even more, their marriages are floundering, and Ted’s father, Chief Logan (Hal Landon Jr.), worries that Bill and Ted’s daughters, Thea Preston (Samara Weaving) and Billie Logan (Brigette Lundy-Paine), are following in their father’s footsteps in all the wrong ways.  But when a futuristic vehicle appears carrying Kelly (Kristen Joy Schaal), the daughter of Rufus (the man who first taught Bill and Ted of their destinies), shows up, strange things are afoot once again. Kelly takes Bill and Ted to meet with her mother and The Great Leader (Holland Taylor), who tells our hapless heroes that time and the very fabric of reality are starting to collapse in on themselves. She warns that if “the song” is not played at 7:17 pm,  all of time and space will collapse in on itself—bogus.

Reeves and Winter are clearly having a great time, especially Winter, who hasn’t had a star vehicle like this in decades and makes every frame count. Lundy-Paine and Weaving are  perfect as “Little Bill” and “Little Ted,” and you might say that they steal the movie out from under their Dads. While that might be the intention, though by no means are the originals pushed into the background. And Sadler hasn’t missed a step in the years upon years that have elapsed since Bogus Journey, proving that his Death is still a welcome release. Schaal works as a suitable substitute for the late great George Carlin precisely because she doesn’t try to be him, and Landon Jr. gets the biggest laugh in the movie.

Director Dean Parisot (Galaxy Quest) was an inspired choice to helm this third chapter, having already proven his skills at juggling science fiction and comedy. While Face the Music is a little slow getting started, when it gets into its groove, it makes for a very fun piece of nostalgia and a much better ending to the story than the one we were given 29 years ago.

Bill & Ted Face the Music is an entertaining romp, and unless you are dead set on seeing it in a theater, I would highly recommend going through a provider such as VUDU or Amazon where you can purchase it for $24.99 as opposed to just renting for $19.99.