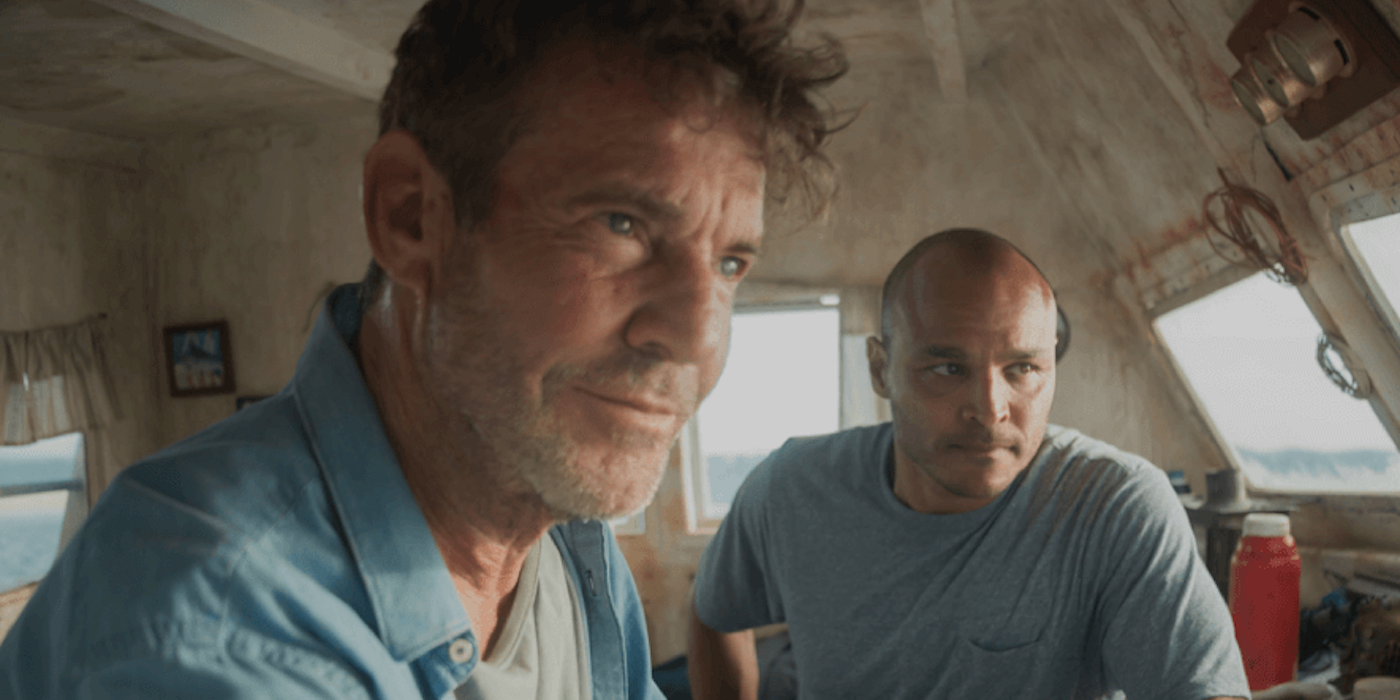 When it comes to the genre of faith-based films, there are two or three different types that tend to be most common. There are the biblical epic, the weepie, the chip-on-its-shoulder–“the liberals don’t want you to see this movie” tirade (usually featuring Kevin Sorbo) and the feel-good inspirational movie that mentions God but doesn’t overplay it because the want to attract a wider audience. Blue Miracle falls into that last category, and that choice is likely to pay off with viewers.

Blue Miracle is based on real events and tells the story of Casa Hogar, a small orphanage for boys, which is about to go bankrupt. Their director, Papa Omar (Jimmy Gonzales, Mayans MC) is desperate to find a way to save it. Omar finds all reasonable avenues closed to him, and in desperation, he turns to a local fishing tournament with hopes of a miracle. There’s one small problem: Neither he nor his boys have ever fished. They team up with the reluctant Captain Wade Malloy (Dennis Quaid, The Right Stuff, The Rookie), a previous tournament champion, hoping he can steer them to victory. Unbeknown to them, Molloy is fighting his own personal challenges. Once out on the open ocean, unexpected friendships are created, strengths are tested, and with the power of faith, we see that miracles do come true.

Director Julio Quintana (The Vessel) does competent work, and the screenplay he co-wrote with Chris Dowling (The World We Could Make) is enjoyable if a bit on the corny side. The biggest strength of Blue Miracle is the performances of Gonzales and Quaid, who complement each other and create a nice chemistry. Quaid has spent a significant portion of his career playing “we couldn’t get Harrison Ford” roles, and with Blue Miracle, the 67-year-old actor is beginning to transition from roguishly handsome Ford into surly old man Ford. His voice is gruff and gravelly, and in his opening scene in which he wears a tight tank top, the bulging veins in his arms look like particularly thick licorice ropes.

But he has some great moments, especially his understated but communicative reaction shots when he listens to the boys talk so matter-of-factly about their pasts and the traumas of their childhood. Gonzales is the true lead. He’s charismatic and brings a lot of presence to the role, but Quaid is what makes it even come close to feeling something like a real movie instead of an old made-for-television movie of the week, even if he does come across a bit like he’s playing Oscar Madison from The Odd Couple as a zombie. The younger actors playing the boys at Casa Hogar add a lot, especially Isaac Arrellanes (Ghostwriter) and Steve Gutierrez (Snowfall, Gentefied).

The fact that Blue Miracle doesn’t go in a preachy, heavy-handed direction with the religious aspects made for a less treacly movie. But I do believe that it could have put a little more emphasis on issues of faith, including struggles with faith, without turning into an in-your-face, Kirk Cameron–style diatribe. It’s a shame that angry Chirstian niche market movies have given religion in film such a justifiably bad name to the point that filmmakers are so afraid to find a middle ground and that we can’t have more films that explore ideas of spirituality more intelligently and artistically, but if it has to err, I’d rather it err on the side of understatement.

Blue Miracle also only scratches the surface of the harshness of the world that these kids have experienced, losing out on both some dramatic possibilities and the chance to make a more lasting impression in order to stay firmly in light PG territory. Still, it’s done well enough to succeed as an innocuous family film that has a lot of heart but does its best to avoid being syrupy enough to make you gag. It’s successful enough at what it’s going for to be a pretty good film. But it could have been a more insightful one if it wasn’t so afraid of alienating anyone on either side of the spectrum. –Patrick Gibbs