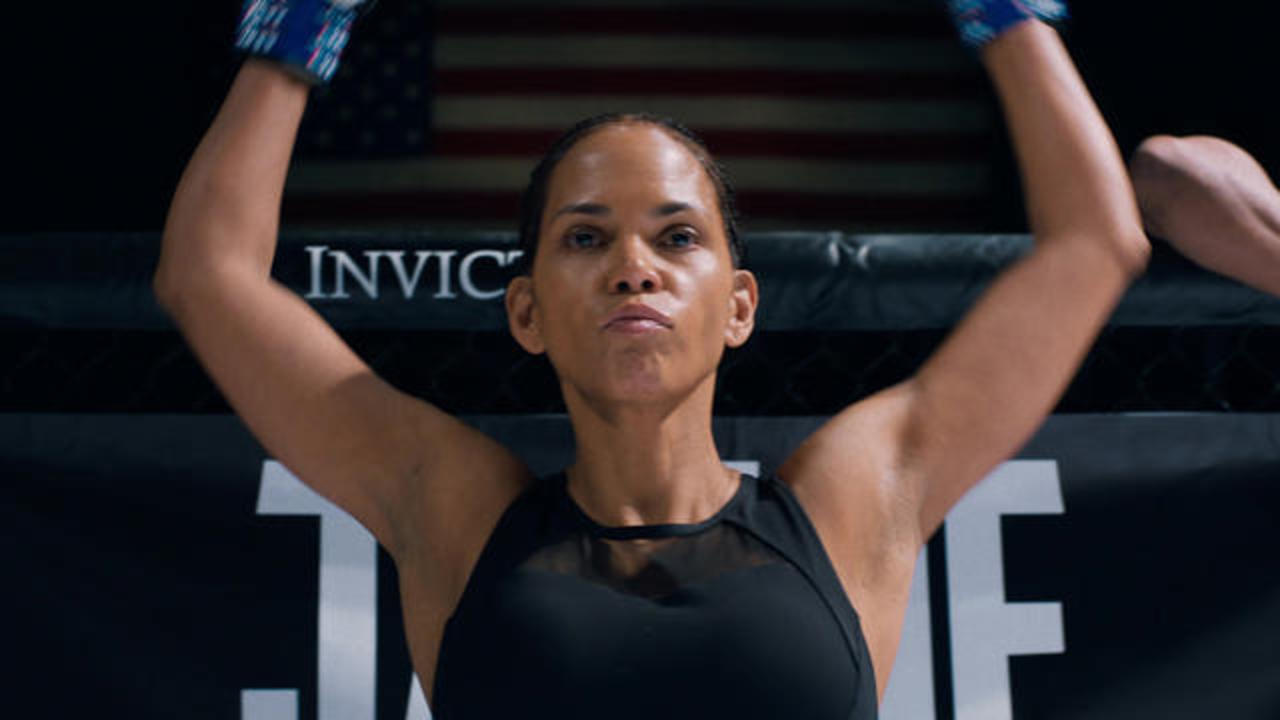 Halle Berry has always been a powerful actor and an appealing movie star, but the number of genuinely good films she’s been in can be counted on one hand with room to spare. The question in my mind has often been whether she has been taking the best she’s been offered, or whether she can’t tell a good script from a bad one. Bruised, Berry’s directorial debut is an almost definitive argument for the latter.

Bruised stars Berry as Jackie Justice, a washed-up MMA fighter with substance abuse problems and a manager/boyfriend, Desi (Adan Canto, 2 Hearts), who can be most charitably described as a mammal. It’s Desi who prods Jackie into underground fighting. There she catches the eye of a big-league promoter who calls himself Immaculate, or Mac for short, played by Shamier Anderson (Awake) who wants to restore Jackie to her former glory, giving her a chance at a title fight.

But the cliché fairy, who is already working overtime, throws a monkey wrench into the work when she brings Jackie’s son, Manny (Danny Boyd, Jr), back into the picture. It seems that the boy’s father died, leaving him with no other next of kin but the mother who gave up, and he is so traumatized that he has stopped speaking—a plot element that feels lifted from bad ‘80s television—Jackie must fight in and out of the ring to get her life in order and earn her son’s love.

Berry the actress does a fine job throwing herself into the physicality and intensity of the role with gusto, but Berry the director doesn’t exactly score a knockout, though she comes swinging. Even if it lacks inspiration, Berry approaches Bruised with workman-like precision and confidence. But first-time screenwriter Michelle Rosenberg doesn’t seem to have what it takes to last one round, let alone three. Bruised is one of the laziest and most formulaic major scripts of the year, with clumsy and wooden dialogue and a mashup of stock contrivances.

Rosenberg and Berry are trying hard to make this raw and edgy, throwing in serious subject matter at regular intervals but handling it all in ways that are both superficial and insulting. Bruised takes a “Why explore something when you can just exploit it?” mindset toward everything from domestic abuse to sexual orientation, the latter tossed in purely for, “Get a load of what a serious actor I am!” effect. The best things that Bruised has in its corner are Berry and Boyd’s performances and a fairly entertaining final fight sequence, which benefits at least as much from being the most screen time given to the great Stephen McKinley Henderson (Fences, Dune), as a trainer called Pops, as it does from Berry’s direction.

Bruised didn’t have the potential to be much more than a Rocky wannabe, but with Berry in the lead, it should have been a pretty good one. It’s a film that desperately wants to be taken seriously but doesn’t want to put in any of the work to earn that, settling for constant pandering. It will be fairly successful on Netflix, but even the streaming giant doesn’t seem to have much confidence in its quality or ability to contend for major awards. The fact that they don’t seem to be even bothering to market it as such may be the best decision. –Patrick Gibbs