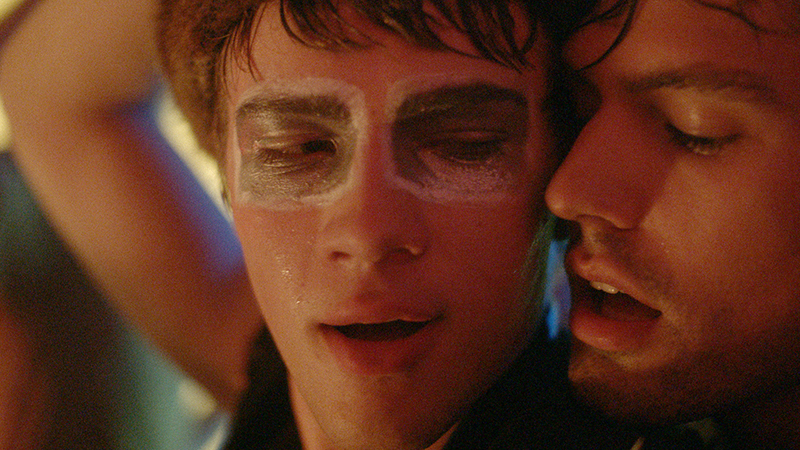 Like the title implies, Closet Monster is a film about the deep, dark fears that are born somewhere in our childhood. In the case of the film’s main character Oscar (Connor Jessup) however, these repressed anxieties are attached to his own sexuality. It’s a well-illustrated look at the sexual confusion that many young people face, especially when negative stereotypes continue to perpetuate among those they care about.

We first meet Oscar Madly as a small child, when his parents make the decision to get a divorce. As his parents Peter (Austin Abrams) and Brin (Joanne Kelly) rage at one another over the kitchen table, Oscar seeks refuge in his relationship with his hamster Buffy (voiced by Isabella Rosselini). After Oscar witnesses a brutal beating of a gay teenager, we see the groundwork for his sexual identity issues during his own struggles as a teenager. Oscar’s relationships with his father, your typical bro who still throws around words like “fag” and “homo,” and his best friend Gemma (Sofia Banzhaf), who begins the film nursing a small crush on Oscar, inevitably become obstacles on his own path to self-discovery. Both Abrams and Banzhaf are great in the film—Abrams plays Peter with just the right amount of douchebag bravado spiked with genuine love for his son, so he doesn’t come across as a generic homophobic asshole. Banzhaf’s own performance captures Gemma’s awkwardness and shaky self-esteem. Oscar’s relationships with both of these people only gets more complicated when a seductive boy named Wilder (Aliocha Schneider) enters Oscar’s life, opening him up to a brand new world of danger and possibility.

Dunn has chosen to tell Oscar’s tale through the lens of reality, tinted with pseudo-psychological horror. It’s a method that could mire the storytelling with the indecision of what disturbing buttons to push, but Dunn pulls it all together nicely. Dunn’s haunting choice of imagery is well-suited for the internal conflicts that plague Oscar throughout his formative years, and it’s only enhanced by Bobby Shore’s cinematography. There are occasions when Dunn’s toolbox of metaphors does tend to hit a bit too close to the mark. For example, Oscar’s chosen media for self-expression is stage makeup—he’s gunning for a spot at a New York City art college so he can pursue a career as a special effects artist—and, though it’s an interesting way to describe a teenager that doesn’t quite know who he is, it’s one of Dunn’s many metaphorical contrivances that aren’t quite subtle enough. On the flip side, Buffy the hamster serving as Oscar’s Jiminy Cricket was a melancholy and brilliant addition to Oscar’s coming of age, and that’s all thanks to the fantastic voice acting work of Rosselini.

Regardless of Dunn’s slightly heavy hand when it comes to the more abstract portions of his film, he has still put together something that packs an equal amount of punch and optimism—Closet Monster absolutely nails Oscar’s frustrations with himself and the world that he’s growing up in. It takes him into some dark places, but his final reconciliation with himself, his family and his pet hamster is extremely satisfying to watch. Bravo to Connor Jessup, who is immediately recognizable as that quiet, creative teenager that we all knew in high school; the one with something traumatic and visceral eating him from the inside. –Alex Springer