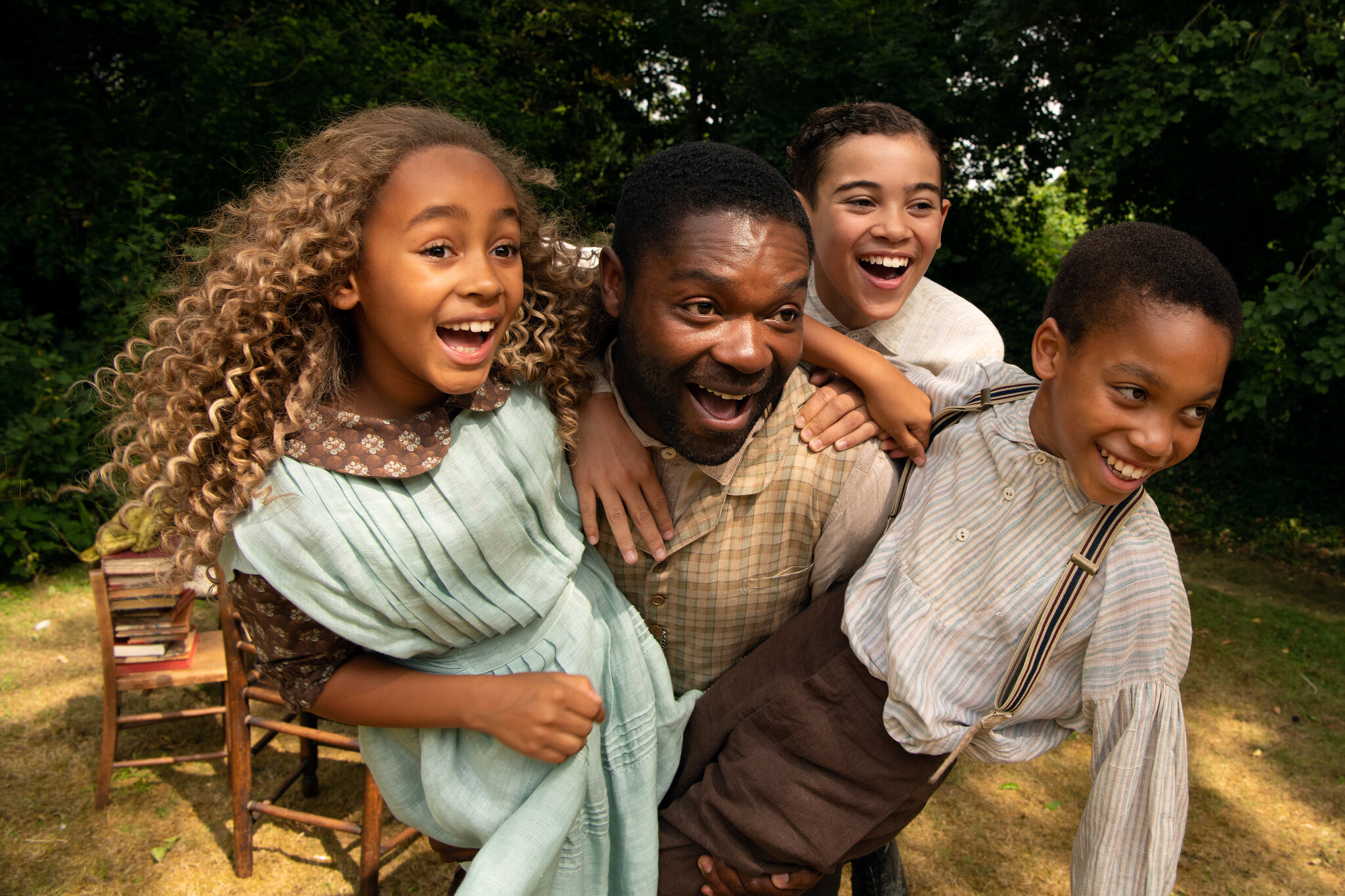 In order for this review to make any sense to those who were never high school theatre nerds, it is necessary for me to explain what a “Harold” is in the world of longform improv.

“Harold” is the name given to a performance structure used by improv troupes around the world. In the Harold, characters and themes are introduced and then recur in a series of connected scenes, in three acts, each with three different scenes and a group segment. With each new act, the three scenes return, and by the end of the piece, the scenes have converged. Ok, got it? That’s okay, neither do I, and I’ve done them before.

Anyway … the new film Come Away is about three children: eight-year-old Alice (Keira Chansa), mischievous Peter (Jordan A. Nash) and their elder brother David (Reece Yates), who let their imaginations run wild one summer in the Victorian English countryside. Encouraged by their parents, Jack and Rose (David Oyelowo and Angelina Jolie), the kids’ have make-believe tea parties, sword fights and adventures aboard pirate ships.  But the fun comes to an abrupt end when – and I don’t want to spoil anything here –  a freak accident leaves the kid whose name isn’t recognizable as a classic literary reference substantially less alive than he was at the beginning of the film. Peter, eager to prove himself a hero to his grief-stricken and financially-struggling parents, and innocent little Alice, who doesn’t quite understand what she’s feeling and just wants to be loved, journey to London together, at which point the movie somehow becomes a sentient being and lights up a reefer the size of Roman Candle and decides to just go to town on that sucker.

Or, to put it another way, Come Away plays an awful lot like a Harold that began with audience suggestions of “Peter Pan!” “Alice in Wonderland!” “Titanic!” “Coping with death!”, ” Mixed race relationships!”  and “Class struggles”, and not only did the performers completely fail to bring these elements together, they forgot about the “mixed race relationships” element before they’d even finished act one. But they did remember “Titanic“, which is why the parents are named Jack and Rose.

Director Brenda Chapman (The Prince of Egypt, Brave) comes from an animation background, but she proves herself capable enough at directing live action, and in particular she gets impressive performances out of the child actors. But the screenplay, by debut feature writer Melissa Kate Goodhill, was enough to make me think it’s time to try out that old “infinite number of monkeys with typewriters” experiment, because any number of their drafts could have resulted in a better story.

In a film that was set now, or even was trying to just go with a fanciful, color-blind approach, the choice not to ever make mention of these kids being black, with a white mother and black father, would be more than welcome. But given the sharp emphasis put on the theme of disdain for the lower classes, social hierarchies and the harsh realities of life in general, to simply ignore the reality of the brutal racism this family would have faced every day at the time the film takes place feels a bit irresponsible, or at least it does until we get to the point where Alice, who is becoming more and more concerned about being a lady of bearing, and feels ashamed of her father for coming from a less than auspicious upbringing, enters her magical fairy land, and her hair starts to turn blond and stays that way all the way to the happy ending, at which point irresponsible feels like a less than adequate descriptive.

The cast and production values are strong, and John Debney‘s musical score is very lively, and it’s slick enough that I really was trying to go with it for most of the 134 minute runtime. But where Benh Zeitlin‘s Wendy at least fully committed to the fact that it was a dark take on Peter Pan that wasn’t meant for little ones, Come Away tries to have it both ways, wallowing in a dismal abyss but still trying, ostensibly, to be a family film, and it just comes across as not quite suitable for anyone who is sober.

Come Away is the cinematic equivalent of a burnt, frozen and then reheated casserole made up of stale ingredients that don’t compliment each other at all, but it seems to be under the bizarre delusion that it’s clever or creative, when it’s really just remarkably dumb. It’s the most ill conceived and thoroughly disappointing film I’ve seen all year, and it left me pondering the other things I could have done with that minutes of my life that I’ll never get back. Please, I implore you, hold onto your own 94 minutes, treasure them and use them more wisely than I did with mine. – Patrick Gibbs