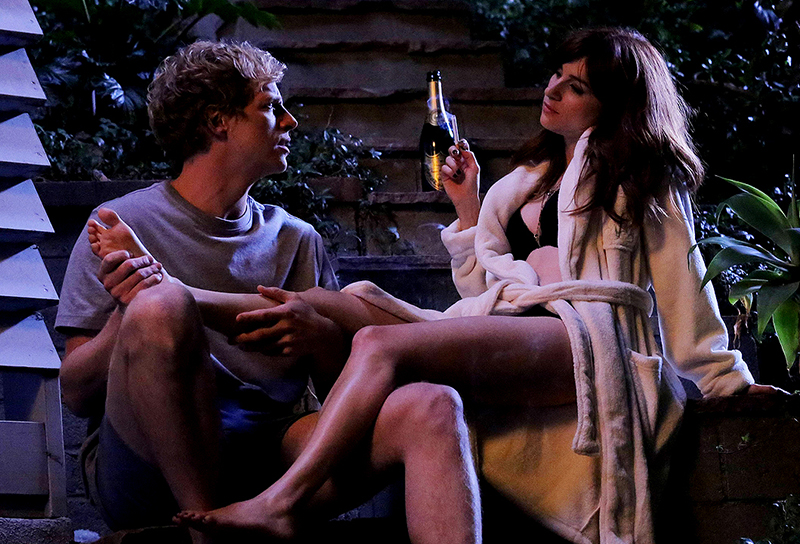 Love is in the air—unless that’s something else slowly choking the life out of you. February is the month of Valentine’s Day, so what else to recommend but romantic(ish) comedies? I mean, we all know how fucking touchy Presidents’ Day is anymore. It’s also my birthday month, so feel free to send presents and cash c/o SLUG Magazine.

TV rom-coms have been around as long as Westerns, cop shows and a certain Sunday-night news program that runs for 60 minutes (what’s it called again?). Consequently, there’s as much shit as there are spoils, but television has noticeably stepped up its game in the 2000s, producing more quality love-adjacent shows than all previous centuries combined (just try and find a decent TV series from the 1800s—I’ll wait right here).

Here are just eight love-adjacent comedies—there are way more, but I have as much faith in your attention span as I do my own—currently available in the streamatorium that are worth a cuddle:

It’s sequential suicide to begin with The Greatest Comedy of All Time, but fuck it: Here’s You’re the Worst! Chris Geere and Aya Cash play a pair of self-absorbed Los Angelinos who are profane, chain-smoking cartoon characters—in the best possible sense. Despite their exaggerated flaws and penchants for terrible, terrible choices, Geere’s pompous British novelist, Jimmy, and Cash’s semi-competent music PR agent, Gretchen, are smart, charming and, from the second they meet, obviously meant for each other. They could carry the show on their own, but YTW subtly expands into a full ensemble of characters who become instantly indispensable, most notably fantastic freaks Lindsay (Kether Donohue) and Edgar (Desmin Borges). You’re the Worst is a dark, cynical, bitingly funny love story—not a romantic comedy: Rom-coms don’t typically involve bathtub cocaine and spitting on vaginas.

You’re the Worst’s introverted cousin, Judd Apatow’s Love, is a love-it-or-hate-it affair, drawing wildly mixed reviews from both real people and TV critics (who, it should be noted, are not real people). Apatow has been making films for so long that we’ve forgotten his early-2000s TV shows (Freaks & Geeks, Undeclared), wherein teens and 20-somethings relationshipped awkwardly. Love is an older, certainly-not-wiser closer of an unofficial Apatow trilogy, as well as a brutal/hilarious portrayal of modern dating. Aimless radio-station programmer Mickey (Gillian Jacobs) spends most of her time stoned, partying or obliviously falling out of relationships. When she meets up with recently dumped Gus (Paul Rust), it’s … something at first sight. Love can be frustrating and messy (just like love!), but it’s also oddly addictive.

The End of the F***ing World (Season 1 on Netflix)

Their censorship, not mine. Imagine a sweeter, British, teenage Natural Born Killers. Then purge it, because The End of the F***ing World ain’t that, or anything else you’ve ever seen. High school outcast James (Alex Lawther) has an urge to graduate from slaughtering animals to his first human kill; budding-wild-child sociopath Alyssa (Jessica Barden) is desperate for a new non-conformist companion; and a codependent young kinda-romance is born. Soon, the odd couple finds themselves on a road trip/minor crime spree set to an exquisite soundtrack with no viable happy ending in sight (hence the eight-episode series’ title). As unpredictable as it is endearing, TEOTFW is a dark rom-com that plays like a four-hour movie with a definitive conclusion (read: a second season would just be psycho).

Judy Greer, Nat Faxon, Jenny Slate, Brett Gelman, Regina Hall, John Hodgman, Michaela Watkins—2014–15 FX series Married starred an alt-comedy dream team, so of course it was canceled. Greer and Faxon play Russ and Lina Bowman, a long-married couple whose three daughters drain them of any impulse for sexy time—one of them, anyway, though Russ’ wife-“sanctioned” quest for a mistress only lands him a puppy. Married walks the line between sweet and caustic more smoothly as it progresses (Lina and Russ come into better focus as real people by the second episode, partially in contrast to their waaay damaged friends), and portrays long-term couple-hood better than most any comedy seen before on TV. Watkins went on to headline Hulu’s excellent Casual, another contender for this list.

There’s nothing else like Crazy Ex-Girlfriend on TV—which is barely on TV itself, according to its sub-basement broadcast ratings. The musical-dramedy was originally developed for Showtime but wound up on The CW, where you have to imagine your own profanity and nudity (though the show pushes network censorship boundaries relentlessly). The setup: Successful-but-lonely New York City lawyer Rebecca (Rachel Bloom, a former “YouTube star” with actual talent) impulsively moves to California to pursue/stalk her high school sweetheart. True to its title, Crazy Ex-Girlfriend doesn’t gloss over Rebecca’s mental issues, which grow more apparent and “Oh shit, we’re really going there” as the series progresses—fortunately, there are plenty of musical uppers to balance out the dramatic downers.

Showtime’s Queer as Folk did all of the groundbreaking, taboo-shattering and whatever-other-ings well over 10 years ago, but there hasn’t been a high-profile American drama centered strictly around gay-men since. Looking wasn’t the new QAF, and it certainly wasn’t high-profile nor the gay answer to Girls and Sex and the City it was wrongly hyped as. It was something new, different and already out and proud. The series followed the lives of San Franciscan Patrick (Jonathan Groff) and his circle of friends, none of whom rang false or over-the-top “TV gay,” just real people with real stories, romances and problems (and too many social-media accounts). Looking only lasted 18 episodes over 2014–15, concluding with a wrap-up movie in 2016—but hey, if Will & Grace can make a comeback …

From noted comedy auteur Neil LaBute(!) came the story of two New York step-siblings (Adam Brody and Lisa Joyce) succumbing to lust and falling in love—even in the obscure media environs of DirecTV’s Audience network, Billy & Billie was pretty much doomed from the start. But damned if Brody and Joyce didn’t give it their all with killer performances in this surprisingly engaging dramedy, which lasted all of 11 episodes and now only lives in DirecTV’s on-demand dungeon lacking resolution (the final episode was titled “Incesticide”—Nirvana references aside, did LaBute really expect Season 2?). If you’ll tolerate incest in your Game of Thrones and your PornHub (just admit it), Billy & Billie is a charming, occasionally heart-rending, alternative—and, come on, they’re only steps.

Since Audience found no audience for Billy & Billie, the next logical rom-comedic step was a three-way: You Me Her, an indie-flick-esque dramedy they promoted as “TV’s first polyromantic comedy,” starring Greg Poehler and Rachel Blanchard as a bored suburban Portland married couple who inadvertently end up hiring/sleeping with/falling for the same young female escort (Priscilla Faia). Naturally, they decide to bring her on full-time and make their marriage a threesome—because Portland. It’s all funnier and sweeter than it sounds, and certainly not without drama and hurt-feels (someone was bound to eventually be third-wheeled, and it’s not whom you’d predict). You Me Her returns for a third, and likely final, season in March 2018, after which I demand Audience’s next rom-com be about furries. –BillFrost.tv