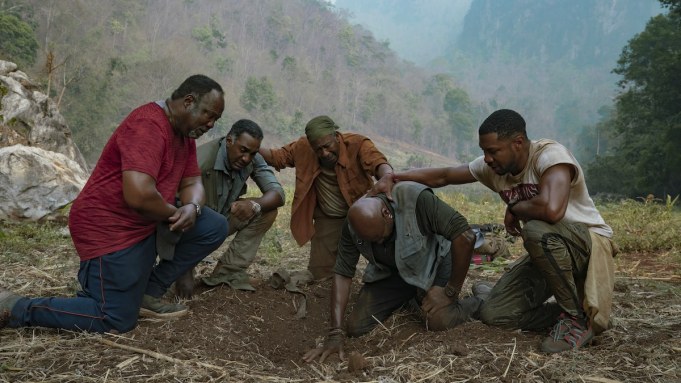 40 Acres and a Mule Filmworks
Streaming on Netflix: 06.12

If there’s one thing you can count on with Spike Lee, it’s that his films will always try to make a statement, and Da 5  Bloods has an awful lot that it wants to say. In fact, it’s trying to say so much that at times that it has it seems to switch into being more of a PowerPoint presentation on Black history than a movie. Thankfully, it’s such an ambitious cinematic journey that it also offers a lot to appreciate, not the least of which is a powerhouse performance by a magnificent and too often forgotten actor, the great Delroy Lindo.

Da 5 Bloods tells the tale of four African-American veterans—Paul (Lindo), Otis (Clarke Peters), Eddie (Norm Lewis) and Melvin (Isiah Whitlock, Jr.), who have returned to Vietnam in search of the remains of their fallen Squad Leader (Chadwick Boseman) and the promise of buried treasure. They are joined by Paul’s son (Jonathan Majors), and together they battle various foes, not the least of which is each othe—and even themselves—while confronting the lasting ravages of a war that for many, will never truly be over.

Lee, who is  fresh off of an overdue Academy Award win for the screenplay for BlackKlansman, tackles issues that include racism, PTSD, aging, anger and division in Trump’s America, and most of all, the Black experience in Vietnam, fighting for a country that was all too willing to send them to die but not willing to give them the rights and the dignity to truly live free at home—and still doesn’t today.

Lee’s ambitious reach and his desire to touch on so many subjects complicates him delving into any of them with quite the depth that they deserve. That’s a shame, because when everything is clicking, Da 5 Bloods is an absorbing film that has a lot going for it, including eye popping cinematography by Newton Thomas Sigel. Lee has chosen to shoot the film in three different aspect ratios in order to create a distinct style separating the flashbacks to the war, the modern plot of the reunion of these men and finally the change that comes over them when they are back in the jungle. It’s a brilliantly effective choice, and I wish that Lee had felt satisfied enough with this stylistic innovation that he didn’t feel the need to try some others that just plain don’t work, such as the jump to still images of Aretha Franklin or Edwin Moses just because the characters make labored references to them. When he’s focused on letting the actors and the story do their thing, the legendary directors really shines.

The performances are all engaging, but Lindo (who has made multiple films with Lee over the course of both of their careers) is fantastic as the troubled Paul, who has never moved past the war and still sees visions of their fallen comrades. Lee daringly makes Paul a Trump supporter, and while this may initially feel like an excuse to be topical, it turns out to be a very effective early sign of just how much of Paul’s life has been ruled by unfocused anger that is eating away at his soul. Chadwick Boseman is a great presence in the flashbacks as “Stormin’ Norm,” the old platoon leader. Norm is never a fully realized flesh and blood character, but that is another seeming weakness that I would argue is a deliberate choice. He is a larger-than-life figure that stands apart from the others in their minds, which is the only reason why it works to have him play opposite the barley de-aged older actors: He exists as a memory that never ages, and there is a distinct separation between the “real” characters and Stormin’ Norm’s rememberence.

Da 5 Bloods isn’t up there with BlackkKlansman, but it’s a good film that comes at time when racial injustice is at the forefront of the American discussion. It’s a welcome addition to that necessary dialogue. –Patrick Gibbs