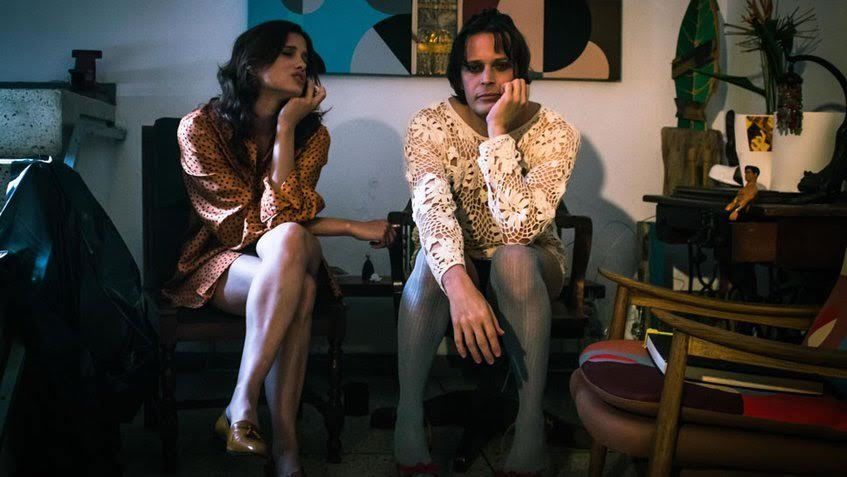 We first meet Teo Almanza (Luis Fernández) while he’s living happily in Paris and en route to attaining a position at a university. When his mother encounters health issues, however, he takes a trip home, somberly, to Venezuela. There, Teo is forced to go to his father for money to pay for his mother’s surgery, and it’s clear that Teo is more or less estranged from his father—Teo’s cross-dressing is viewed as a so-called “disguise.” After deciding to stay in Venezuela to be close to his mother and realizing that he’ll never be accepted for who he is, Teo starts a path toward a straitlaced, highly successful law career. He switches out his long hair for a sensible beard; his bright, flowing tops for sharp business suits; and his dear friends in Paris for a beautiful wife and two young children. The thing is, Teo is a woman—he’s known it since he was a child, but he feels trapped: by the wrong body, by the possibility of being rejected, by Venezuela’s unyielding policies and unaccepting culture. Instead of coming out to his wife, Teo speaks with a therapist, secretly puts on dresses and makeup, and picks up a trans sex worker, Carmencita, to look at her body and ask her questions. Six years after Teo first moved back to Venezuela, though, his mother, right before her death, pushes him to live his truth.

Elia K. Schneider’s bracing narrative feature draws inspiration from the incredible life of Venezuela’s first transgender elected official, Tamara Adrián, to tell the story of Teo’s long, lonely and demanding journey to transition. As Teo starts to publicly present herself as a woman and start hormonal therapy, she’s ostracized from her family. She faces discrimination at the Catholic university where she teaches, from her students’ hateful ridicule to her colleague’s efforts to get Teo fired. Her therapist seems to try to discredit or cast doubt on Teo’s desire to transition. The free-spirited woman with whom Teo later falls in love, Ana (Prakriti Maduro), angrily walks out when she finds out that Teo wants to have gender reassignment surgery. And when Teo finally does get that surgery, the Venezuelan government refuses to change her ID cards to reflect her new name, Tamara; while traveling, she’s humiliated and forced to strip down to prove her gender identity to security officials.

Tamara takes a long look at one individual’s story of transition while depicting the day-to-day violence that so many trans bodies endure. Tamara fights within herself, grappling with confusion, fear, self-identity and alienation. Simultaneously, she’s endlessly confronted by outside forces, from ingrained societal prejudices to a system that only ever diminishes her.

As a film, Tamara is beautifully shot, edited and conceptualized. While the feature grips viewers from start to end, however, its storyline is painful. All throughout Tamara’s transition, she’s met by aversion, hostility or opposition—and all throughout, she’s distressingly and viscerally alone. Still, Schneider successfully portrays her narrative without sensation or gimmick, bringing an empathetic touch to Tamara’s affecting script, excellent performances and thoughtful, impactful and visually rich shots. Fernández especially stands out in his role with the extraordinary subtlety and care he brings to Tamara, drawing out with nuance his character’s immense strength, grace and resolution. –Kathy Rong Zhou