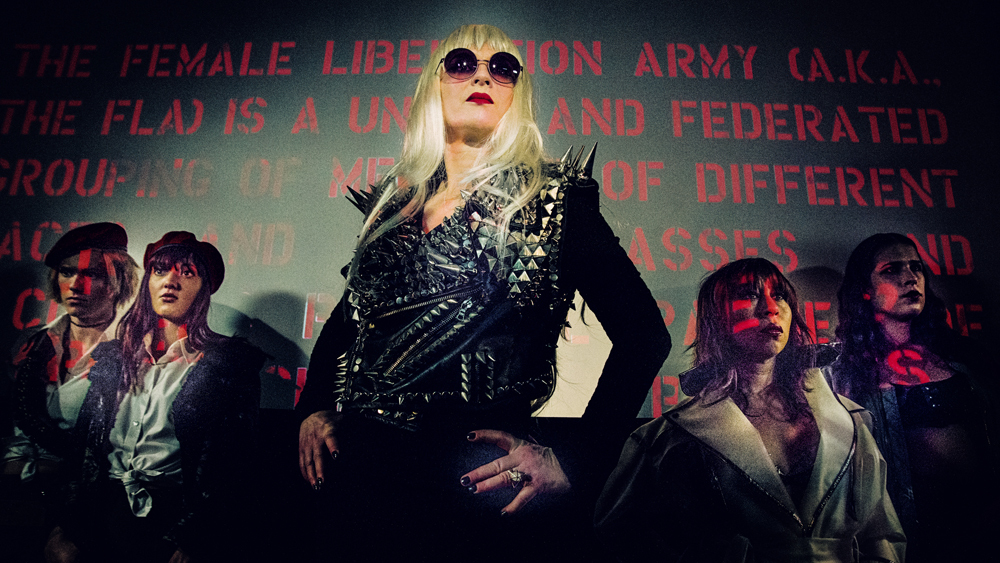 Damn These Heels 2018: The Misandrists

The Misandrists is the most frustrating movie I’ve seen in a while. I got whiplash trying to understand whether the film was celebrating women or only pretending to—satirizing with camp or offering an actual worldview. Within the same five minutes I could find something funny, something sweet, something transphobic and something revolutionary. It’s a film that is more cohesive than at first it seems, but still less cohesive than it believes itself to be.

A young man named Volker (Til Schindler) is limping through a field when he sees two girls, Isolde and Hilde (Kita Updike, Olivia Kundisch), frolicking together. When Isolde realizes Volker is a revolutionary and running from the law, she convinces Hilde to help hide him in the basement of their all-girls school where the two girls live. While Volker recovers in the basement, the leader of the school, Big Mother (Susanne Sachße), teaches and raises them as misandrists, having brought most of the girls out of poverty, prostitution or abuse—all at the hands of men and the patriarchy. The school becomes the groundwork for forming the FLA, Female Liberation Army, a radical and violent group born to fight the patriarchy through direct action. The girls learn about history, biology, sex and order, all couched in radical feminist thought and, ironically, drenched in puritanical aesthetics: Teachers dress as nuns, and the girls wear modest school uniforms.

The Misandrists is obsessed with juxtapositions like this, and it’s hard to tell how seriously to take it all. Almost every scene has competing arguments. When we meet Big Mother, the girls and sisters are at dinner, eating modest soup and reciting prayers thanking God that she did not make them men. Big Mother is a campy matriarch but also a legitimately radical feminist, and her ideology (which she often just explicitly states) is, of course, about hating men, but it’s often also trans-exclusionary. During the dinner Big Mother also reveals and discusses how the school is funded through prostitution of the girls, and eventually the school starts producing its own lesbian porn to distribute and sell as a revolutionary act. It’s a lot. It’s constantly asking you to enjoy its absurdity while also celebrating its women. One scene is a cathartic pillow fight lit like a dream, subverting male fantasy through genuine lesbian love, and another scene is Big Mother coercing her girls into having sex with one another (she insists she only persuades them, no coercion).

In theory, a big part of me enjoys this constant interplay between bold, feminist intention and ironic or satirical reality, but I can never follow the deconstruction to its end—women loving women is absolutely revolutionary, but treating trans women like traps and forcibly turning men into women is anything but, and if the film is self-aware about this fact, I couldn’t tell. The overt misandry is almost certainly not to be taken seriously, but the film lingers so long on Isolde’s heterosexuality, Volker’s feminization and literal castration, porn and lesbianism as revolution. Every time I started to have fun with the movie, it went in a direction I thought was ideologically unsound. If the point is to play dress up with bad feminism, I’m not interested.

I want to be emphatic about this: as a queer, non-binary person, I didn’t enjoy this film. I don’t enjoy wading through this muddy water. The kicker, the perhaps most frustrating thing, happens post-credits: the two trans characters Volker and Isolde kiss each other. It’s simple and quick, and ironically the actual most revolutionary act in a movie obsessed with radicalism. At that point, it only felt insulting.  –Parker Mortensen