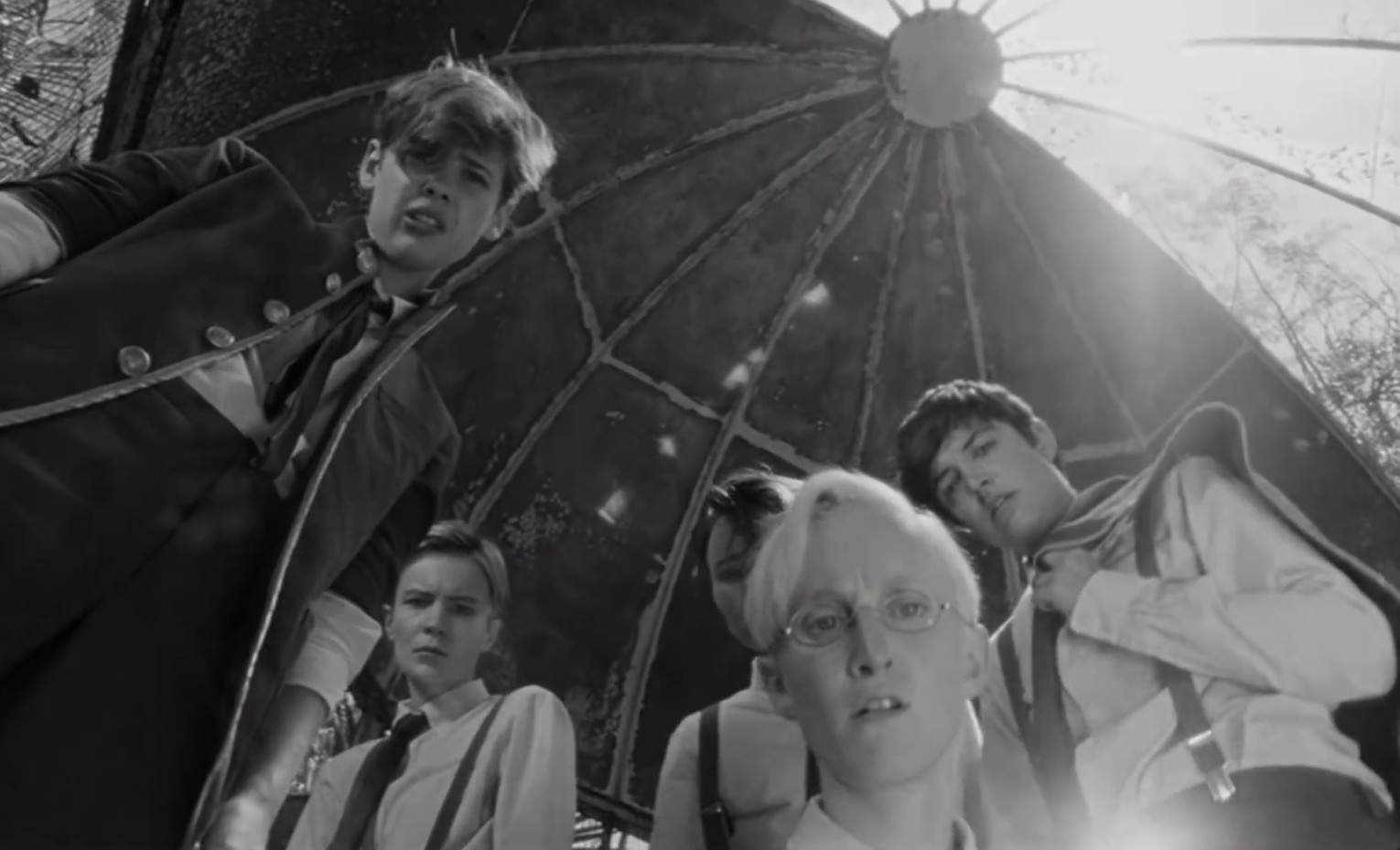 The Wild Boys is a distinctly odd film, in both style and content. So much so that I’m not sure even now whether or not I like it, though as is often the case with film, liking isn’t necessary as long as it brings something new. Whether you find it enjoyable or uncomfortable, watching this film is a visceral experience, as it focuses on the repulsive, tactile and even outright disgusting elements of violence and sex.

The Wild Boys dives straight into its themes of violence, sexuality and gender performance, with a surreal and graphic scene in which five rich delinquent school boys—Romuald (Pauline Lorillard), Jean-Louis (Vimala Pons), Hubert (Diane Rouxel), Sloane (Mathilde Warnier) and Tanguy (Anaël Snoek)—sexually assault and kill their literature teacher (Nathalie Richard). Following an even more surreal trial scene, the boys are sent with a man referred to as Le Capitaine (Sam Louwyck) who claims he can reform them, making prison time unnecessary. The Captain’s methods prove to be brutal: When he brings them on board his ship, he ties them up by their necks to a contraption that allows him to strangle them should they disobey. They are beaten, left exposed to the elements, their books and other possessions thrown away, and fed only small hairy plums.

At the end of their journey is a strange and dangerous island, full of phallic flora and sexual pleasures—a paradise after their arduous time on the boat. There they meet Le Docteur Séverin(e) (Elina Löwensohn), a naturalist who first discovered the island years ago. Séverin(e) has been working with Le Capitaine for years to use the magical, gender-altering effects of the island to reform delinquent boys, believing that the answer to the extreme violence experienced in the world is feminization. The boys’ pleasure on the island soon turns to alarm as their penises fall off and their breasts grow, leaving them with female bodies, and with those, a new perspective.

Exploration and examination of gender as a performance, and in particular the violence associated with masculinity, is at the core of this film’s philosophy. While at times bordering on lewd, Mandico’s approach to the human body and sexuality is refreshingly frank, void of the romanticism and mystique that often veils sex in cinema. The camera doesn’t shy away from the vulgar, instead glorifying it. From slow-panning shots of semen, blood and dirt flying through the air to the viscous membranes and fluids of the plants on the island, everything is shown in extreme, and often glittery, detail.

The cinematographic approach taken in this film is just as odd and interesting, shifting between gritty black and white and hazy chromatic hallucinatory visions. The visual style is dissonant, even chaotic at times, but somehow, it works. The chaos that erupts on the screen helps to convey the overwhelming feelings and experiences of the boys as the island transforms them. It all works together to create a world and a powerful experience, and while the philosophy may be a little heavy-handed toward the end, the message is clear. –Lois Brady