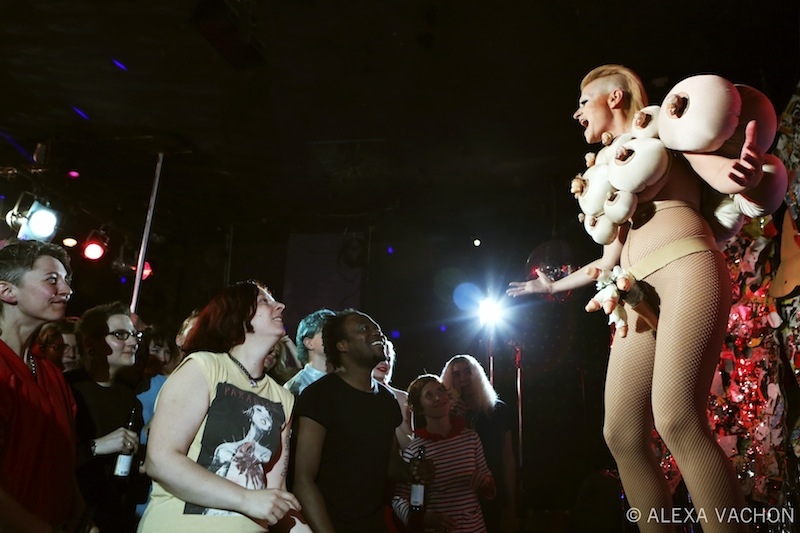 Desire Will Set You Free: Interview with Director Yony Leyser

Yony Leyser’s new film is a cross-section of the contemporary Berlin underground. The film, a feature-length narrative that mixes autobiographic and docu-fictional elements, follows a cast of outsiders through a subcultural landscape that is uniquely outsider—Berlin. SLUG spoke with Leyser about writing, directing and acting in the film, and the Kickstarter campaign that he hopes will help bring the film to Utah’s film festival circuit.

In Desire Will Set You Free, Leyser combines his own coming-of-age story with a celebration of Berlin’s vibrant queer and punk subcultures. “There is an importance to sharing queer narratives,” says Leyser, whose two feature films share a common thread—people living outside of polite society—and tell the stories of interesting people. After a project on queercore that he was working on fizzled out, Leyser, a U.S. American of Israeli/Palestinian descent who lives in Berlin, wanted to explore his own story against the backdrop of Berlin’s vibrant subcultures. “I met a lot of interesting and fascinating people, and I wanted to tell their stories,” he says.

The film follows Ezra’s (Leyser) relationship with Sasha (Tim-Fabian Hoffman), a Russian artist and émigré, and features an eccentric cast of characters as they travel through Berlin’s alternative landscape. “It’s docu-fiction,” says Leyser. “It’s telling a true story and using a lot of characters playing themselves, having a lot of real dialogue that was really said, but it’s a fiction. It’s kind of a coming-of-age film—it’s about exploring one’s sexuality, about living in an urban environment.”

Being the film’s writer/director and one of its lead actors proved to be a bit challenging at times for Leyser, and rewarding at others. “It’s an interesting way of controlling the story from the inside,” he says. “It was so autobiographical. I wanted to expose myself, too. I was the first character cast.”

Leyser’s first film, the documentary William S. Burroughs: A Man Within, explored the life of Beat writer and counterculture icon, William S. Burroughs. The film premiered in Park City at the Slamdance Film Festival in 2010, and also screened that year at the Utah Film Center’s Damn These Heels LGBT Film Festival. Similar to A Man Within, Desire features an all-star cast for its environ, the Berlin underground, including Nina Hagen, Peaches, Rummelsnuff, Eva and Adele, Rosa von Praunheim and a host of other Berlin celebrities. “I think if you have an interesting project, it’s easy to convince people,” Leyser says about scoring a star-studded cast for Desire. “When something cool comes from the underground, people are going to want to do it.”

“Nina Hagen was last-minute,” says Leyser of a role intended for American performer Penny Arcade. “The night before we were shooting, we didn’t have someone to play that role. I got a call from [Hagan] saying that she loved the script and that she would do it.”

The film is a celebration of the layered history of Berlin, where vibrant subcultures, art and architecture—from the Weimar Republic, WWII, the Berlin Wall, the Bowie and punk years and German reunification—have flourished for decades. Today, Berlin is home to thriving LGBT, punk and artist communities, which are piled on top of the remnants of Berlin’s history. “It’s definitely a very gay city,” Leyser says.

Although it is a celebration of Berlin’s underground glamour, Leyser didn’t want the film to gloss over darker aspects of life in Berlin or other queer-friendly places. “If you’re struggling to make ends meet and you don’t speak the language, is it going to be a queer utopia for you?” he asks. The film also examines the difference between refugee and expatriate, life and explores what happens when the oppressed becomes the oppressor. “A queer person can be just as oppressing as a heterosexual person,” he says.

In addition to Berlin’s glitterati, Leyser lined up an incredible soundtrack of contemporary artists covering classic Berlin songs. “Blood Orange covering Malaria!, Friends covering Klaus Nomi, Starfucker covering Iggy Pop, Kool Thing covering Bowie,” he says. Check out some of them being put to use in the film’s trailer, which also shows Canadian-born, now Berlin resident Peaches performing in a costume made of fake breasts.

Filming has already been completed, and Leyser is now focusing on all aspects of its post-production, including editing, color correction, sound design, soundtrack clearances and festival submissions. “We would love to premiere [Desire Will Set You Free] in Park City, either at Sundance or Slamdance,” Leyser says. Leyser is using Kickstarter to cover post-production costs and will help bring the film to the film festival circuit. “Any kind of small or large donation helps, and we have some great rewards for that. We appreciate support from the community.”

The deadline for the Kickstarter is Aug. 6. If you want to see what a flawless Kickstarter looks like, check out Desire Will Set You Free.