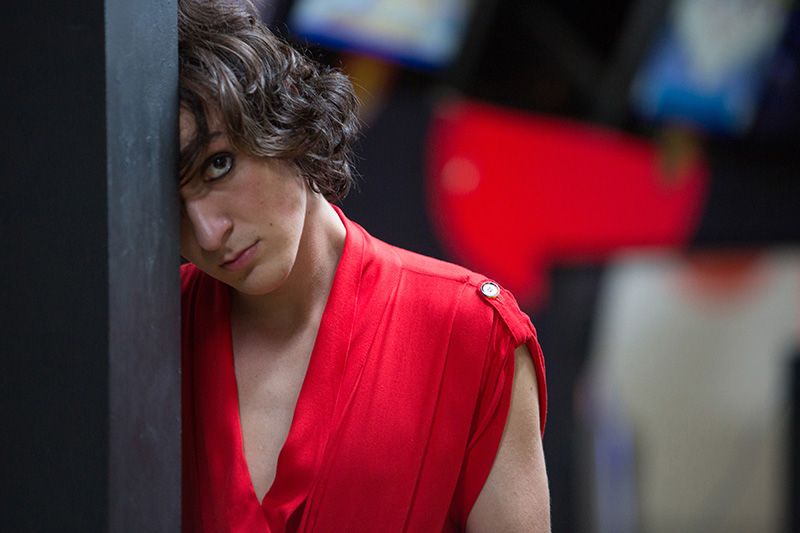 When we first meet Pierre (played effortlessly by Naomi Nero), the handsome, androgynous, 17-year-old protagonist of Anna Muylaert’s Don’t Call Me Son, he seems remarkably self-assured. In the first scene, Pierre dances with a guy at a party before hooking up with a girl and bringing her into the bathroom to have sex on the sink, his black G-string and garters clearly visible. Later, he plays guitar with his band, heavy on the dark eyeliner and nail polish, and makes out with his bandmate. At home in his family’s small but cozy apartment, he carefully shaves his chest and takes selfies in the bathroom. It’s clear from the start that Pierre is close with his younger sister, Jaqueline (Lais Dias), as well as his single mother, Aracy (Daniela Nefussi). Both adore Pierre and seem to accept him as he is.

Don’t Call Me Son starts out like many a queer coming-of-age film, but refreshingly, Muylaert expertly weaves in more dramatic elements and premises: When Brazilian authorities unexpectedly arrive at Pierre’s family’s home, he and his mother are taken away for DNA tests. Pierre mentions that he knows that he’s adopted, frustrated by the authorities’ treatment of his mother. Soon after, however, Aracy is arrested and jailed. It turns out she wasn’t either child’s mother—because she stole them at birth. When Pierre and Jaqueline are separated and returned to their biological families, Pierre finds himself forced to confront questions of his identity.

Pierre meets his new family at a restaurant, where he’s despondent, unsmiling and mostly silent, unhappy about his family’s use of his birth name, Felipe. His biological parents are overjoyed, on the other hand, with dad Matheus (Matheus Nachtergaele) making a toast and mom Glória looking lovingly at Pierre, though she does make a point during the meal to ask him why his nails are painted. (Notably, Glória is also played terrifically by Nefussi, who shines in each of her two roles as mother, encouraging the viewer to consider motherhood’s dualities.) Throughout, Pierre’s new younger brother, Joca (Daniel Botelho), remains watchful and, perhaps, a bit amused, though he later chides Pierre for disrespecting Glória after she searched 17 years for Pierre.

Pierre grapples with the feeling of being doubly stolen from his family. He can’t bring himself to connect with the strait-laced, upper-middle-class Matheus and Glória. Here, we realize Muylaert’s deft storytelling, as she explores identity’s many facets—gender, sexuality, family, class, culture—while maintaining a stunning empathy for each of her characters. We feel for Pierre, who feels like a possession pawned off to people who feel entitled to him. Despite the fact that most of the film follows Pierre’s perspective, we grow endeared by Joca, who gets his own small storyline as he traverses his woes of liking a girl at school who doesn’t want to be seen with him. And however misguided or obtuse their actions—Glória with incessant nagging and fussing, Matheus with a squarish aggression and bigoted hostility—we find ourselves understanding Matheus and Glória as two people desperate to reclaim the lost years with their child (like when Matheus breaks down after meeting Pierre, overwhelmed by how much Pierre looks like his own father).

Things begin to come to a head when Matheus and Glória take Pierre shopping, excited to replace his attire of tight-fitting T-shirts and ragged tank tops with polo shirts and the like. When Pierre steps out of the dressing room in a tight, zebra-print mini dress, however, his parents are stunned—Glória disturbed, Matheus utterly repulsed to the point of violence. It’s the first time Pierre is upfront about his identity with his birth parents, his brooding nonchalance replaced by smirking aplomb, and it’s also a satisfying fuck-you moment.

With the help of cinematographer Barbara Alvarez, Muylaert elegantly navigates major themes—class, familial ties, adolescence, identity and self-determination—while presenting an excellently crafted drama. With subtlety and intelligence in its script and characters, Don’t Call Me Son is a 2017 Damn These Heels gem. –Kathy Rong Zhou