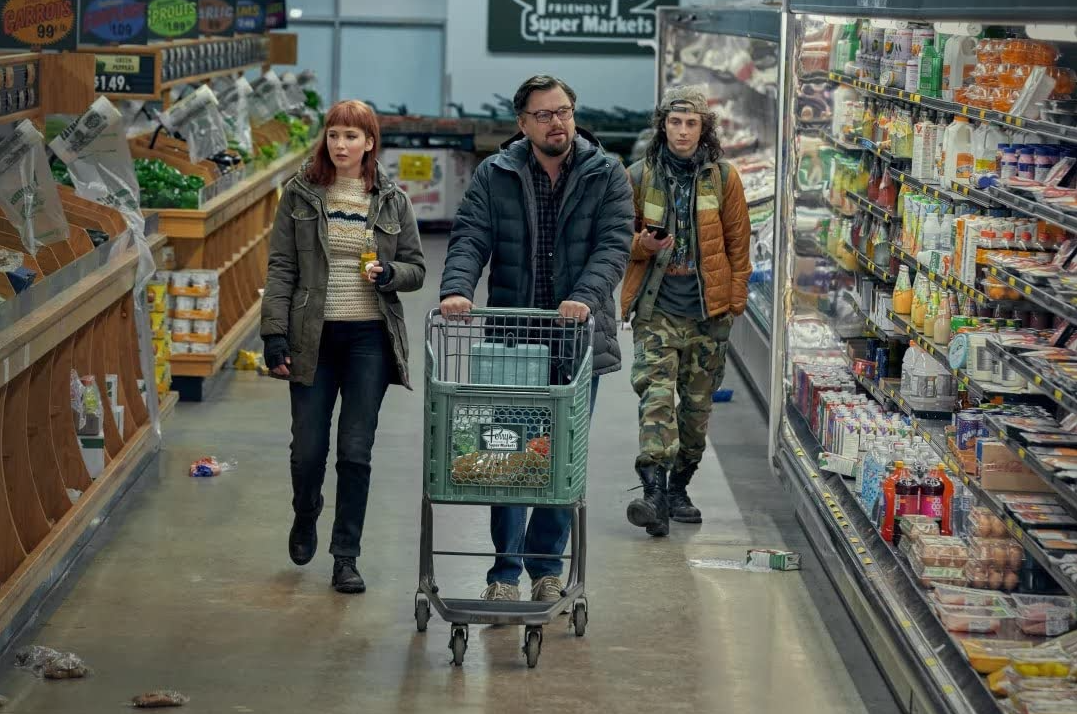 It’s never a good idea to go into an Adam McKay film hoping for subtlety. The former Will Ferrell collaborator turned semi-serious filmmaker isn’t interested in leaving any room for interpretation or discussion, opting instead to deliver his messages like a baseball bat upside the head. In the case of Don’t Look Up, there’s something to be said for a nice Louisville slugger.

Don’t Look Up begins with grad student Kate Disbasky (Jennifer Lawrence, Silver Linings Playbook) discovering a new comet while monitoring the night sky. When she reports this to her Professor, Dr. Randall Mindy (Leonardo DiCaprio, The Revenant), his calculations determine that Comet Disbasky is on a direct course to hit the Earth and cause an extinction-level event within six months. Randall and Kate contact government scientist Dr. Teddy Oglethorpe (Rob Morgan), and they head straight for a meeting with President Orlean (Meryl Streep) to inform her of the catastrophic news. The President, however, doesn’t take the threat seriously. When the trio goes behind her back to leak the news to the press, it becomes clear that willful denial is the almost-universal response—it’s a lot easier than doing anything about it.

Don’t Look Up is an outrageous, bombastic and frequently dead-on satire that aims to be the Dr. Strangelove of its time with heavy doses of Wag The Dog and the obligatory It’s A Mad, Mad Mad Mad World! quality that has become a hallmark of Mckay’s post-Ferrell films. Don’t Look Up skewers climate deniers, anti-vaxxers, big tech corporate America and the social media generation with a fierceness that often feels like it’s close to being just a bit too on the nose, but it’s also such a deft mix of laugh-out-loud hilarity and depressing commentary that it’s hard to argue too much with the approach.

DiCaprio and Lawrence are pitch perfect in their respective roles, and it’s a joy to see the latter bringing her flawless sense of timing to comedy again. Streep is wickedly effective as the leader of an unnamed party that isn’t at all hard to name, as is Jonah Hill as her Chief of Staff/son, Jason Orlean. Oscar-winner Mark Rylance (Bridge of Spies) is quite cartoonish and amusing as eccentric, socially awkward tech mogul Peter Isherweel, and Ron Perlman (Hellboy) channeling George C. Scott’s General Buck Turdison is a hoot. That doesn’t even cover half the celebrities featured in the film, which also includes Cate Blanchett, Melanie Lynskey, Tyler Perry, Ariana Grande and DiCaprio 2.0 himself, Timothée Chalamet.

The most frustrating aspect of Don’t Look Up is that while it pleads its case strongly enough, it’s preaching to the choir. Even those who need the loud wake up call most of all will likely not finish watching it all the way through on Netflix; even if they do, they will dismiss it as propaganda. Though, as much as we’d all like to believe we aren’t part of the problem, there are just enough moments to make almost everyone who does see it think, “Okay, that part stung a little.” There’s still enough of McKay’s bloated and self-indulgent signature style to keep Don’t Look Up from achieving unquestionable greatness, and there were a lot of moments where I was arguing with myself over what worked and what didn’t, including the unabashedly Douglas Adams–esque final gag.

There are a lot of question as to what kind of audience Don’t Look Up will reach, but it’s the kind of satire that will leave smart viewers thinking about it when they least expect it for years and even decades to come. On a thumbs-up/thumbs-down meter, Don’t Look Up is a resounding thumbs up that packs a lot of chutzpah and wit alongside surprisingly tender dramatic moments. Don’t Look Up slams into the target it’s hurtling toward with unstoppable force. –Patrick Gibbs