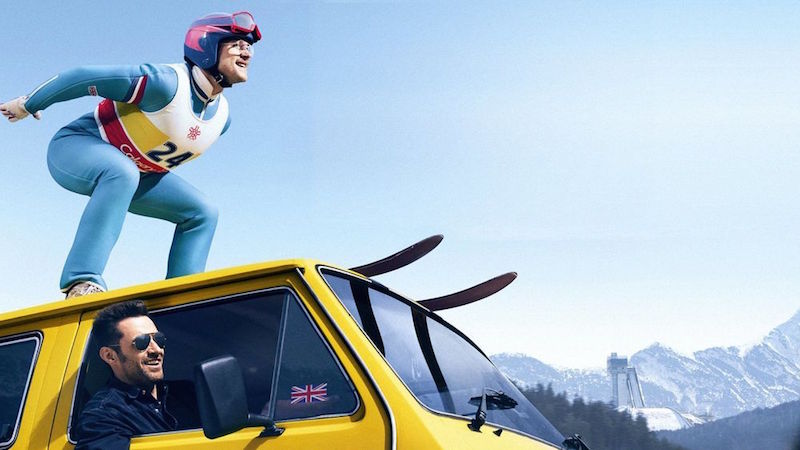 It’s usually Disney who distributes the inspirational true sports story, but it’s 20th Century Fox who decided that the incredible accomplishments of Eddie Edwards needed to be seen on the silver screen. Since he was a child, the thick-glasses-wearing, socially awkward Edwards (Taron Egerton) always wanted to be an Olympian. However, it wasn’t until his teenage years that he focused on skiing and the Winter Olympics. After learning to ski and actually winning competitions here and there, he was still denied a position on the British ski team due to his awkwardness and economical position. Never wanting to give up hope, Edwards discovered a loophole and began training for the ski jump since there were no other competitors. After nearly killing himself time and time again, he attracts former jumper turned alcoholic Bronson Peary (Hugh Jackman), and they begin training. Obviously, they make it to the Olympics, or we wouldn’t have a movie, but the ending may actually take you by surprise. Egerton captures the goofy charisma of Edwards, who has a heart of gold that made me want to stand up and cheer. The chemistry between Egerton and Jackman works beautifully, as their characters couldn’t be any more different. Director Dexter Fletcher takes audiences on an exhilarating ride as the camera places you directly on the daunting slopes and over the edge. Your stomach will definitely get a little queasy as you take flight. As the events took place in the 1980s, Fletcher captures the true essence of an ’80s ski movie with Matthew Margeson’s score, complete with incredible synthesizers. It would be quite difficult to walk out of this movie without a smile across your face. It’s that charming and motivating. However, you will never see this film critic ever try one of these deathtraps covered in snow—never, ever. –Jimmy Martin