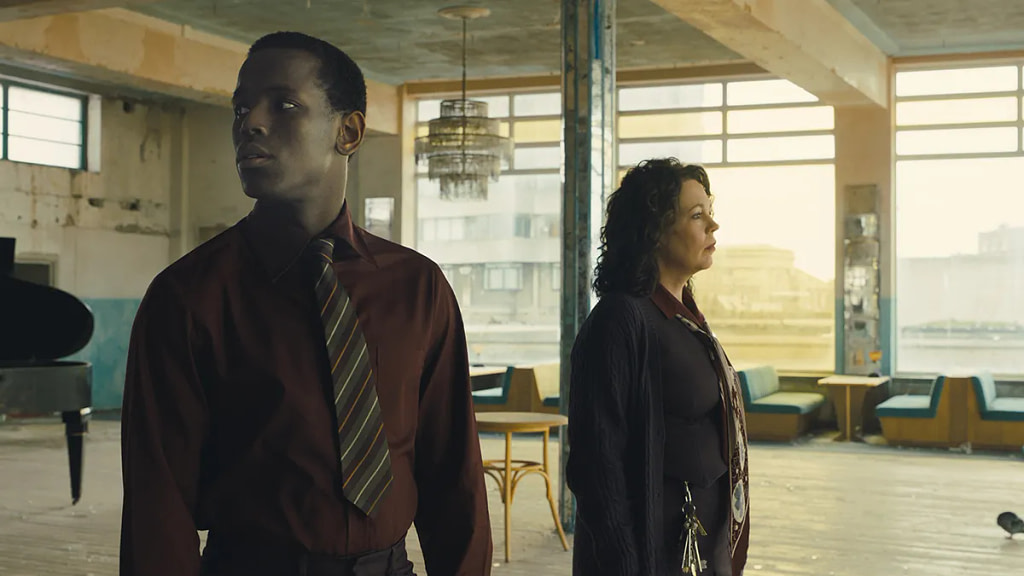 In recent years, Sam Mendes has become increasingly known for helping spectacular action movies on a grand scale, with his back-to-back 007 films and the epic, World War I masterpiece 1917. The celebrated director of stage and screen returns to his roots with the intimate character drama Empire of Light, the latest entry in the “love letter to the movies” genre.

Oscar darling Olivia Colman stars in Empire of Light as Hilary, the assistant manager of the Empire, a beautiful, old-time cinema in a small town off the southern coast of 1980s Britain. Hilary is a quiet loner, with little going on in her life apart from her job and an extramarital affair with her smarmy boss, Mr. Ellis (Colin Firth)—even that feels like an extension of her work duties.

When the Empire hires Stephen (Michael Ward, The Old Guard), a charming young Black man, Hilary takes some time to warm up to his youthful charms, though his spirited personality and interest in her soon lead to a secret, May–September romance. Their relationship is fraught with drama as Steven experiences overt racism in his everyday life and Hilary hides a troubling secret from her new lover.

Empire of Light sees Mendes embracing the opportunity to do an intimate character study again, though he is marred by arguably the weakest script of his entire career. Mendes’ first solo screenwriting effort, Empire of Light was partially inspired by his mother’s mental health struggles. While this certainly sounds promising, even daring,  the approach feels cursory and shallow. The plot is crammed too full of half-realized ideas never quite find their footing, and the result is an aimless and surprisingly lifeless film that’s most interesting when concentrating on blissful nostalgia for the golden age of lavish, one-screen theaters than when tackling serious subjects such as love, racism and mental health. Mendes creates a strong atmosphere, and as someone who grew up in the days of red curtains, flickering projector lights and the soft sounds of the film reels, I found myself frequently enchanted.

That being said, anytime you’re watching a drama and you find yourself thinking, “Oh, great, not another tedious character scene about skinheads and schizophrenia. Let’s just get back to how the projection system works and sequences of people selling popcorn,” you’ve got a problem. Empire of Light features no particular insights into either subject, making them feel like an afterthought justifying the film’s existence. There’s a kernel of an idea here, yet it consistently fails to pop.

Colman lifts the film up a notch with another strong performance, though Hilary isn’t one of the great roles of her distinguished filmography. Far too often, she’s reduced to cheap melodrama; she fares best in the film’s quieter moments. Ward is an engaging presence, and it’s easy to like Stephen, though the romantic interplay between Ward and Colman isn’t exactly fireworks. Firth is reduced to a thankless and underwritten supporting role, and this dull, boorish cad of a character feels beneath Firth as an actor. Toby Jones steals the film as Norman, the projectionist who views his work as its own sort of art form, and I found myself wishing that Mendes had focused the movie around him.

Empire of Light isn’t a terrible film, though it easily stands as the least noteworthy entry in Mendes’ 21-year filmography, which leaves the taste of major disappointment. If you want to see a celebration of the magic of the cinema, I suggest you see The Fabelmans instead, even if you’ve already seen it once. Better luck next time, Sam. –Patrick Gibbs

Check out reviews of other films and series set in the 1980s:
Film Review: Bones and All
Series Review: Stranger Things: Season 4, Volume 1