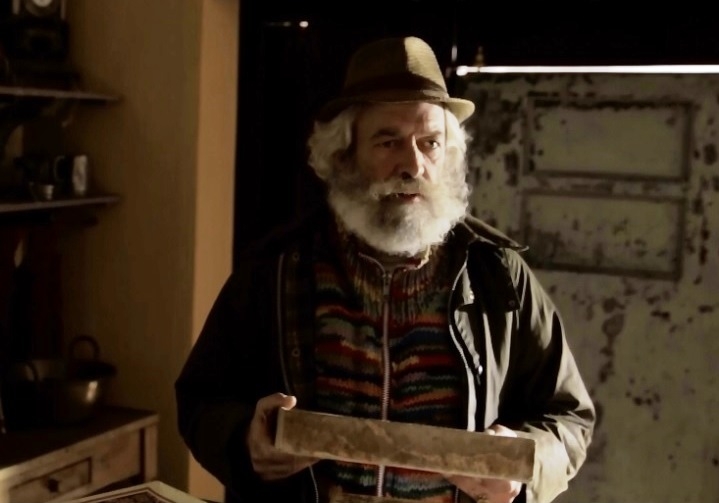 The films in this block were chosen for their ability to portray the fact that there is a set of universal truths that help people navigate their way through a world that is often confusing and unfair. These truths can be found in the words of Jewish refugees who recall immigrating from their homes to escape brutal intolerance or within the words of African Americans who still struggle with a culture of racism in our country today. Regardless of where they come from, when we take a moment to reflect upon the fact that our global boundaries are not as clear cut as we think, we take our first steps towards a more enlightened state of being.

Chaja & Mimi (Germany)
Directed by Eric Esser
In contrast to Esser’s film November (the one about existential poop), Chaja & Mimi is much more inviting. Chaja and Mimi are two women who have been friends for 83 years. As they meet in a Tel Aviv café to recount their families’ flight from Berlin to Palestine during the rise of the Nazism in Germany, we see a story about friendship and identity that is both beautiful and heartbreaking. While simply listening to these two friends discuss these milestones that took place in their lives was engaging enough, I thought the occasional cuts to the café around our subjects was an interesting contrast. So often, Chaja and Mimi refer back to their own youth, and to see how different today’s young people are from them while they discuss the vast changes that they’ve seen helped emphasize the quiet power of their story. Understatement can be a useful tool in a documentarian’s toolbox, and the decision to let the footage of these two friends speak for itself makes their stories all the more powerful.

Meaning of Life (California)
Directed by Yannis Zafeiriou
I’m sure that director Yannis Zafeiriou had the best of intentions when he made this film. It’s got a positive message and features artistic video renditions of many hands touching many things. This should just be one of those innocuous films that make the viewer think, “Well isn’t that nice?” So why did Meaning of Life leave me feeling unpleasant? Perhaps it’s because Seril James’s powdery narration came across as preachy and condescending, or perhaps calling a film that is little more than an arrangement of platitudes and syrupy imagery Meaning of Life is pretentious and assuming. Or perhaps it’s because my heart is cold and dead inside. Regardless, this film was one of the few that didn’t quite resonate with me.

The Master Cleanse (New York)
Directed by Daniel Goldberg
It’s not uncommon for filmmakers to put a feature-length idea into a short film’s package, but sometimes that forced transition can make a film appear incomplete. The Master Cleanse makes an interesting statement about human sexuality and whether or not it’s possible to maintain a romantic relationship without sex, but it’s a concept that requires a lot more than fifteen minutes to fully explore. In a film that places a burgeoning relationship front and center, the major players need to muster some serious chemistry, which I didn’t quite catch. It was tough to see why Jim (Alex Alcheh) and Brook (Angelica Reeve) were so adamant about pursuing their relationship when they didn’t appear to even like each other. Conceptually, The Master Cleanse has some potential—it just needs a bit of a cinematic touch-up.

Modou Modou (Spain)
Directed by Virginia Manchado
Modou Modou documents a day in the life of Tanor Diop, a Senegalese migrant living in England. Finding work with different street vendors, Diop’s commentary reveals that he has come to England to pave the way for his family to follow—but the harsh reality of his circumstances has resulted in a backbreaking work schedule. In addition to his long hours of manual labor, Diop also outlines many of the stereotypes that are placed upon him by members of the majority. During one memorable scene, Diop turns away a homeless man who thinks that since Diop is black, he must be a drug dealer. It’s one of those films that helps shed some light on a representative group of people whose struggles and motivations are just as valid as those of anyone else, regardless of race or socioeconomic status.

The Jigsaw (Portugal)
Directed by Basil & Rashad Al-Safar
Why does the customer always want the piece of merchandise that the storeowner specifically forbids? In this case, it’s a ratty old jigsaw puzzle—one that the storeowner claims has always returned back to him under unfortunate circumstances. Despite his warnings, our elderly customer insists on bringing it home with him. Though it’s fairly obvious what happens next, the Al-Safar brothers put a unique twist on the ending that made the film seem less than formulaic.

Understated, Overstepped (Utah)
Directed by Gabriella Huggins
Calling into question our society’s incorporation and use of the n-word, Understated, Overstepped gathers several members of Utah’s African American community to discuss the pitfalls of appropriating a term that has so much negative history attached to it. Gabriella Huggins’s documentary is a very socially conscious work, and it helps shed some light on the obfuscated culture of racism that still exists in our state and country. Subjects such as Saundra Stokes of Utah’s Inclusion Center and Tri “Planit” Taylor of KRCL’s Friday Night Fallout eloquently discuss the gravity of racial issues that so many people are struggling with, and the film is a great resource for those looking to actively make our society more tolerant of others.

The selections for this year’s Fear No Film festival have been eye-opening, to say the least. It’s nice to know that we still live in a world where boundaries are constantly being challenged and redefined, and even nicer to know that we have a local presence who believes it’s important to share these messages with our community. A very special thanks is due to the organizers of the Utah Arts Festival, and its Fear No Film exhibit, for taking the time to encourage Utahns to be more explorative and inclusive.