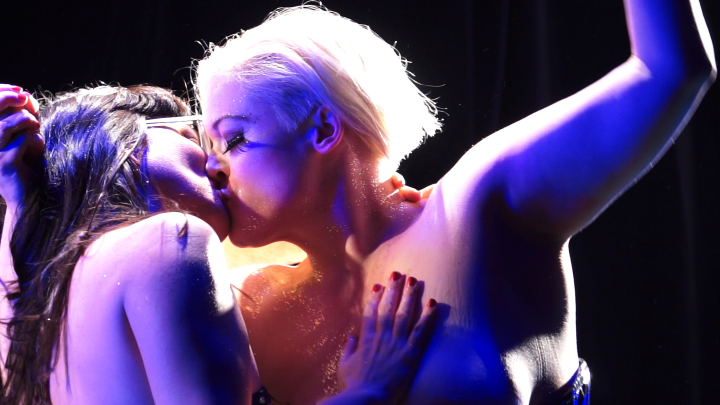 During the opening credits of Femme Brutal, a documentary chronicling the exploits of Austria’s Club Burlesque Brutal, we are introduced to the key players via a series of stylized intro scenes. We see women clad in their individual stage costumes perform signature moves as names like Madame Cameltoe, Frau Professor La Rose and Doktor Sourial appear next to them. While I wondered how exactly I was going to write a review for this film—I’m about as far removed from the Austrian queer burlesque community as someone can be—I started to think about how these intro videos reminded me of wrestling promos. This thought was largely attributed to the fact that I just finished Netflix’s GLOW, and likely because my brain was scrambling to create a contextual schema that I could use to connect with the film. At the time, I didn’t pay much attention to this thought—it’s kind of embarrassing how many things get me thinking of pro wrestling, to be honest. As the film progressed, however, I was surprised to see that the queer femmes of Club Burlesque Brutal weren’t all that different from the Gorgeous Ladies of Wrestling. Each of the women interviewed for the film were drawn to the world of queer burlesque as a form of sexual empowerment—they needed an artistic avenue that would help them use their bodies in a way that made them feel powerful, and they found it.

Femme Brutal functions as both a venue for the performances of Club Burlesque Brutal and a stage for the performers to discuss their motivations for orchestrating these performances. First and foremost, this ain’t a burlesque show designed with the male gaze in mind. In a way, the women of Club Burlesque Brutal have appropriated an artistic medium that used women as titillating objects for the men in the audience to ogle. Repurposing elements of burlesque to demonstrate queer desire and the feminine form is the kind of avant-garde performance art that one would expect from an important Renaissance city like Vienna.

The cast interviews in between performances provide some fascinating insight into the different performances, but also regarding the queer and female perspective in today’s world. Each woman came to the world of burlesque because they felt lost and out of place. Since their desires didn’t coincide with those of the status quo, finding a spirit of community among the women of Club Burlesque Brutal helped them find the power in their differences. These are stories that will resonate with anyone who has felt a little different from the majority.

Even though the film’s cast is endlessly watchable, the documentary aspect of Femme Brutal feels a bit basic. Like clockwork, it cuts between scenes of performance and individual interviews. It’s all surprisingly devoid of color, which feels like a missed opportunity considering the fact that it revolves around burlesque performers. The interviews shined some light on a ton of larger issues at play within the world at large, and it feels like the filmmakers missed another opportunity to expand their reach a bit.

My years as a white hetero male have made me painfully aware of how much women and femmes are denied control of their own bodies and desires in the world today. It’s too bad that progressive steps in feminine empowerment are more prevalent in fringe communities like burlesque performance and professional wrestling—mainstream artistic expression could learn a thing or two from the perspectives offered in Femme Brutal. –Alex Springer