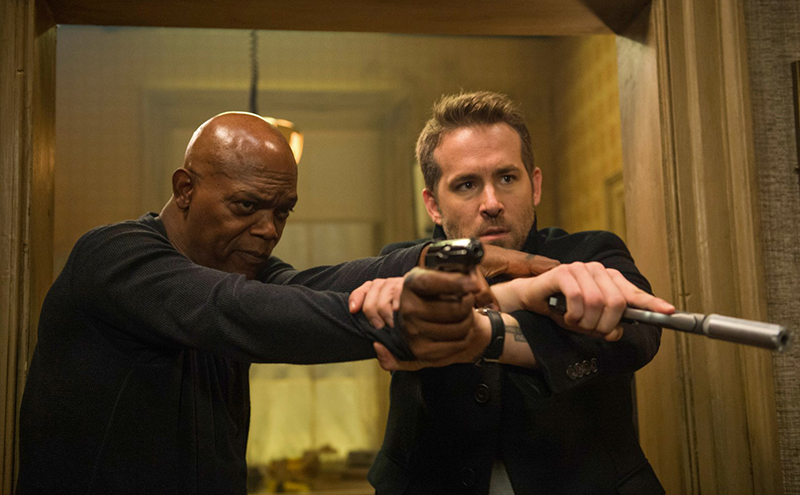 When you have an all-star cast like the one you have here, obviously the anticipation for a solid action/comedy is at a critical level. Personally, I try to avoid as many trailers as possible before screening a film, especially comedies, since many tend to ruin the best punch lines. However, sometimes the desire is unavoidable. In this endeavor, Michael Bryce (Ryan Reynolds) runs a high-profile protection agency for the elite who have a target on their back. After a failed mission, his career is flushed down the toilet, and any gig will do. Enter Darius Kincaid (Samuel L. Jackson), a professional hitman in Europol custody who is willing to testify against an evil dictator (Gary Oldman) in exchange for the release of his imprisoned wife (Salma Hayek). Bryce has essentially one day to get Kincaid to the trail before the deadline expires, and with a slew of other professional killers on their tail, it may be more difficult than it looks. On a positive note, director Patrick Hughes has developed some clever action scenes with nifty camera angles and creative and impactful scenarios. With that said, there’s not much more to talk about in the encouraging realm. For two solid actors to have absolute no chemistry together is shocking. Rather than having hilarious insults tossed back and forth, their dialogue comes across more like bickering, which ultimately drains the film with only a handful of chuckles remaining. The inclusion of vulgarity and obscene language does not phase me in the slightest. If it’s done correctly (like in Deadpool), it can be one of the best films of the year. However, when a script just wants to be dirty to be dirty, there’s nothing imaginative about it. This is easily one of the biggest disappoints of 2017. –Jimmy Martin