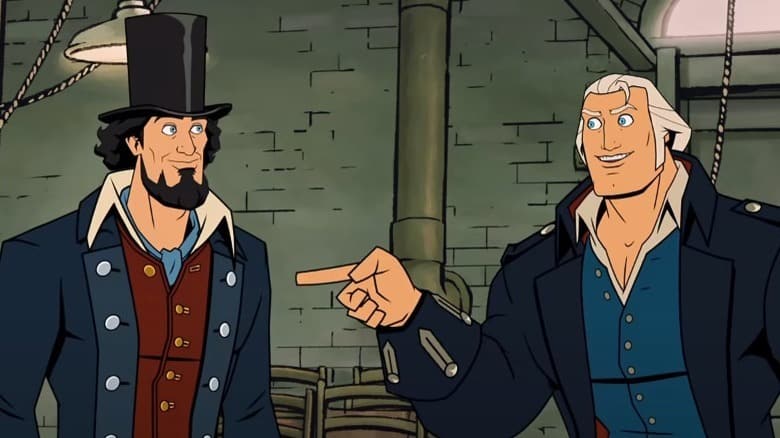 Not all stupid comedy is inherently dumb. There’s a certain type of asinine ridiculousness that verges on genius. America: The Motion Picture builds a bridge between idiocy and brilliance, even if it’s constantly running back and forth and spending a lot of time standing right in the middle of it.

Director Matt Thompson (Archer) and screenwriter Dave Callaham (Wonder Woman 1984) clearly had the time of their life with this one. While there’s an element of “how can we make the scene ever more asinine?” at play much of the time, there’s more going on than just going for shock value laughs. America: The Motion Picture is very much a parody of Hollywood in the way it plays fast and loose with facts when making a historical epic, but it’s also a sly and biting commentary on the rose-colored, hero-worshipping version of American history that we’ve been being taught for centuries, and which so many are desperate to keep feeding to our kids despite the fact that we know it’s both educationally and morally suspect.

America: The Motion Picture isn’t half as one-sided as the 1776 Project or Matt Gaetz’s insidious attack on Critical Race Theory this past week. Yes, Tatum’s Washington has retractable chainsaw blades that come out of knuckles like Wolverine’s claws (“I cannot tell a lie. That cherry tree didn’t cut itself down”), and it’s not anymore ludicrous than the whole “Now, now, let’s not argue about who killed who” attitude toward, at long last, recognizing Juneteenth as a holiday.

Is our intrepid group of heroes sneaking on board the Titanic to steal silver spoons any more absurd than fiercely hanging onto a statue of Stonewall Jackson or having a meltdown because you think that Aunt Jemima syrup is a cornerstone of American culture that we can’t live without and then accusing other people of being overly sensitive? I defy anyone to find anything in this film half as juvenile as the notion that patriotism requires telling the story of our country in such a way that whitewashes out every shameful or unsavory moment or assert that they are immaterial or that addressing them is somehow wrong.

Tatum is hilarious as Washington, doing his patented, big-dumb-lug routine to perfection, giving George enough lovable earnestness to make it work. Judy Greer (Arrested Development) is a riot as the comically buxom Martha. Trujilo’s dry delivery is priceless, and Samberg and Pegg steal the whole movie. There are so many silly Star Wars references relating to these two that, at times, it feels almost like Callaham and Thompson were trying to win a bet that they couldn’t fit in one more.

America: The Motion Picture is not for all audiences, as it’s piled high with R-Rated content of every shape and size. I’d be embarrassed to admit that I loved it so much if the wickedly subversive message wasn’t so spot on, that refusing to be embarrassed about what is painfully apparent and right in our faces is what Americans do. There’s a winking and unapologetically self-indulgent quality to it that recalls Inglourious Basterds, which is probably the last time I had this much fun with something this crazy and in your face, because there’s a calculated madness in the method behind both films. I cannot tell a lie: I loved this gleefully imbecilic masterpiece, which is not the same as saying that you’re all going to love it. But it’s an audacious and often clever sendup of the traditions of American storytelling that couldn’t be coming at a better time. There is so much about this particular point in political and pop culture history that America: The Motion Picture so perfectly embodies that I have to give it my enthusiastic endorsement. –Patrick Gibbs