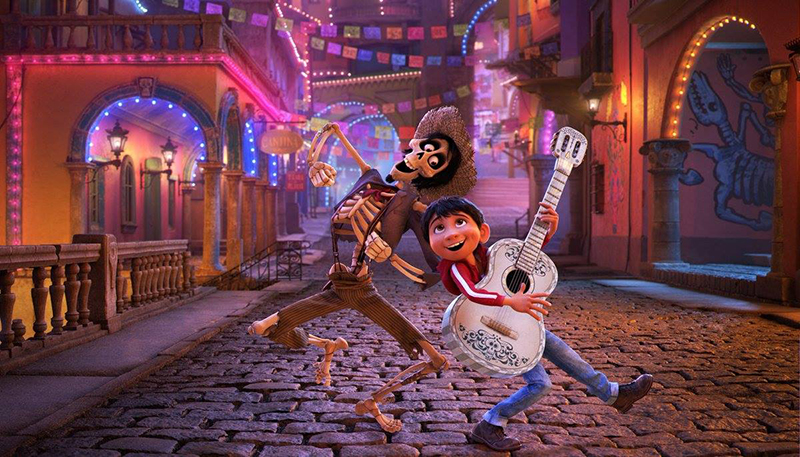 Rather than waiting till the end of the review to let you know my feelings about Pixar’s latest original creation, I’m going to go ahead and get it out of the way. This is by far the greatest animated movie of 2017. It feels so good to type that. In this tale based in Mexican culture, Miguel (voiced by Anthony Gonzalez) aspires to become a musician just like his famous great-great-grandfather, Ernesto de la Cruz (voiced by Benjamin Bratt), but, due to his relative’s actions of walking out on his family to follow the same aspirations, music has been banned indefinitely among Miguel’s family. Against his grandmother’s specific instructions to abandon his dreams after smashing his guitar, Miguel “borrows” his deceased idol’s guitar from his mossilum, which, unexpectedly, transports him to the Land of the Dead on the sacred holiday of the Day of the Dead. While the departed inhabitants of this world are shocked that a living child is among them, Miguel must find a relative to give him permission to return home before sunlight or be trapped there forever. Along the way on his journey, Miguel befriends Héctor (voiced by Gael García Bernal), a hustler just trying to survive day by day with a desire to be remembered by his living family. Once again, Pixar delivers jaw-dropping animation with vibrant colors that fill the screen with wonder. This representation of Mexican culture is something everyone should witness firsthand, and that includes the sensational music that accompanies the tale. Also in true Pixar fashion, they still have the ability to make grown men cry in the theaters. This is a story about families for families, and it’s another great addition to the studio’s collection. –Jimmy Martin