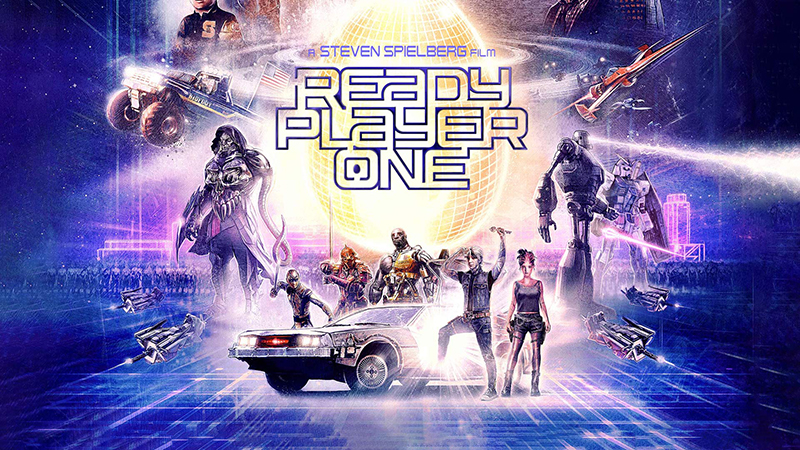 For years, I have lived by the crucial rule never to read the book of an upcoming movie unless there is significant time between the novel and the film’s release. I have never been a fan of comparing the two mediums while trying to observe the cinematic interpretation. Such is the case with director Steven Spielberg’s latest project, Ready Player One (based on the 2011 novel by Ernest Cline, who also co-wrote the screenplay), which is essentially a modern-day tale of Charlie and the Chocolate Factory with references to video games, movies and television shows. When James Halliday (Mark Rylance) passes away, he leaves an Easter egg in his virtual universe, The Oasis, and whoever solves the three puzzles and locates this hidden object will inherit his massive fortune and ultimate control of the make-believe playplace. Enter Wade Watts (Tye Sheridan) and his uncanny knowledge of pop culture and desire to reformat his life while in pursuit of said treasure. For those who have read the book, you will quickly become aware that Spielberg takes his uncanny knowledge of cinema and changes the game fairly quickly. Is it better than the book? For me, it’s two separate beasts, and each fits its place. However, as I read the book months ago, I knew witnessing the spectacle on the silver screen would be more intense than any novel, and that is exactly what transpires. From the Teenage Mutant Ninja Turtles and Robocop to King Kong and Master Chief, this production has something for everyone to enjoy. The contrast from digital filmmaking inside the virtual universe to the old-school 35mm endeavor gives both environments their own identity. It’s abundantly clear this film needs to be seen multiple times in order to catch at least 60 percent of the references produced onscreen. The 1980s-dominant soundtrack is phenomenal, and Alan Silvestri’s score screams Back to the Future. For any geek, this film will make you giggle as if you were back in your childhood, and you didn’t even have to reach 88 mph. –Jimmy Martin