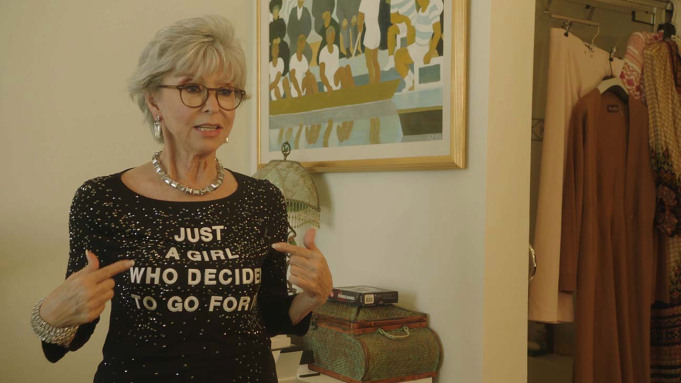 Film Review: Rita Moreno: Just a Girl Who Decided to Go for It

Rita Moreno: Just a Girl Who Decided to Go for It
Maramara Films

The first time I ever saw Rita Moreno act was on the PBS Children’s series The Electric Company. I can still remember waiting excitedly each day to hear her yell out her signature phrase, “Hey, you guys!” I had no idea that she was an Oscar-winning actress at the time; to me, she was just that funny lady. I saw her again on The Muppet Show, where she appeared as the first guest star on the premiere, and I’ve been a fan ever since. Rita Moreno: Just A Girl Who Decided To Go For It tells the unfiltered story of a legend of the stage and screen, who won an EGOT (Emmy, Tony, Oscar and Grammy), yet, arguably, has still never been given her due.

Rita Moreno: Just A Girl Who Decided To Go For It chronicles a 70-plus-year career filled with spectacular highs and near-tragic lows. It tells the story of how Moreno defied both her humble upbringing and relentless racism to become a celebrated and beloved actor and performer. Born into poverty on a Puerto Rican farm, Rosita Moreno and her seamstress mother immigrated to New York City when little Rosita was just 5-years-old. After years of studying dance and performing on Broadway, young Rosaita—rechristened “Rita,” after one of her idols, Rita Hayworth—signed a contract with MGM, where Moreno was cast as any ethnic minority the Hollywood studios needed filled.

Despite becoming the first Latina actress to win an Academy Award for her role as Anita in West Side Story, the studios continued to offer Moreno lesser roles as stereotypical ethnic minorities, ignoring her proven talent. Rita Moreno: Just a Girl Who Decided to Go for It illuminates Moreno’s humor and grace, as well as the lesser-known struggles she faced on her path to stardom, including pernicious Hollywood sexism and abuse, a toxic relationship with Marlon Brando and serious depression a year before she emerged an Oscar winner. Moreno’s talent and resilience triumphed over adversity as she broke barriers, fought for representation and forged the path for new generations of artists.

Director Mariem Pérez Riera (Lovesickness) takes an intimate approach, following Moreno throughout her daily life alongside the extensive interviews. It’s quite interesting to watch Moreno watching the Brett Kavanaugh hearings live, just like anyone else, and then to hear her own shocking story of sexual assault at the hands of her own agent. The documentary features extensive interviews with people who either worked or were inspired by the sensational star, including Morgan Freeman, who appeared with her on The Electric Company before he was famous, and Latin stars ranging from Lin-Manuel Miranda to Eva Logoria, who were looking for people on television who looked like them.

But by far the most enlightening interviewee is Moreno herself, who is remarkably open to the point of fearlessness, shining a light on her personal struggles with wit and candor. And the abundance of clips will give you plenty to add to your binge list, with the top priority being West Side Story. Whether you’ve seen the film or not, Rita Moreno: Just A Girl Who Decided To Go For It will make want to at least refresh your memory in anticipation of Steven Spielberg‘s new version, which includes Moreno in a supporting role and hits theaters this December. –Patrick Gibbs