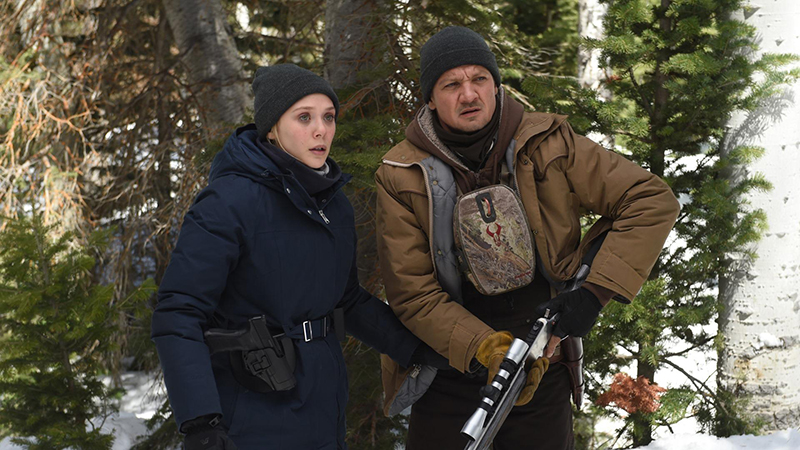 The Weinstein Company
In Theaters: 08.18

If you’re from the Beehive State, you may notice that while director Taylor Sheridan’s mystery thriller is set in Wyoming, it was actually filmed in the gorgeous community of Park City, Utah. This chilling tale follows Cory Lambert (Jeremy Renner), a wildlife hunter/trapper, who discovers the body of an 18-year-old girl in the middle of nowhere on a Native American reservation. Due to the crime scene’s circumstances, FBI agent Jane Banner (Elizabeth Olsen) is called to investigate, but, since she’s new to the force, she asks Lambert to help locate the murderer. As the two spiral down the dangerous rabbit hole and follow the breadcrumbs to the truth, every step forward is stunning filmmaking. As I could continue with the plot, this is one of those films where it’d just be rude to reveal any of the revelations, so we’ll stop here. This story is as daring as it is emotional. Some scenes will have you wiping away the tears from your face, and, five minutes later, you’ll be clenching your fists with anticipation. Most people recognize the two leads from the Marvel Cinematic Universe, which gives them some element of multi-level characters to play, but witnessing them use Sheridan’s vision and depth is a whole other level of talent. Also—and there’s definitely a conflict of interest here—Ben Richardson’s cinematography is sheer brilliance. He captures the notion of being in the middle of nowhere in an endless snow-filled abyss, conveying utter terror. The film does suffer from multiple-ending syndrome, but that’s really the only negative aspect of this fantastic piece of cinema. This critic would like to tip his hat to Sheridan for allowing the state of Utah be a part of one of the best films of the year. –Jimmy Martin