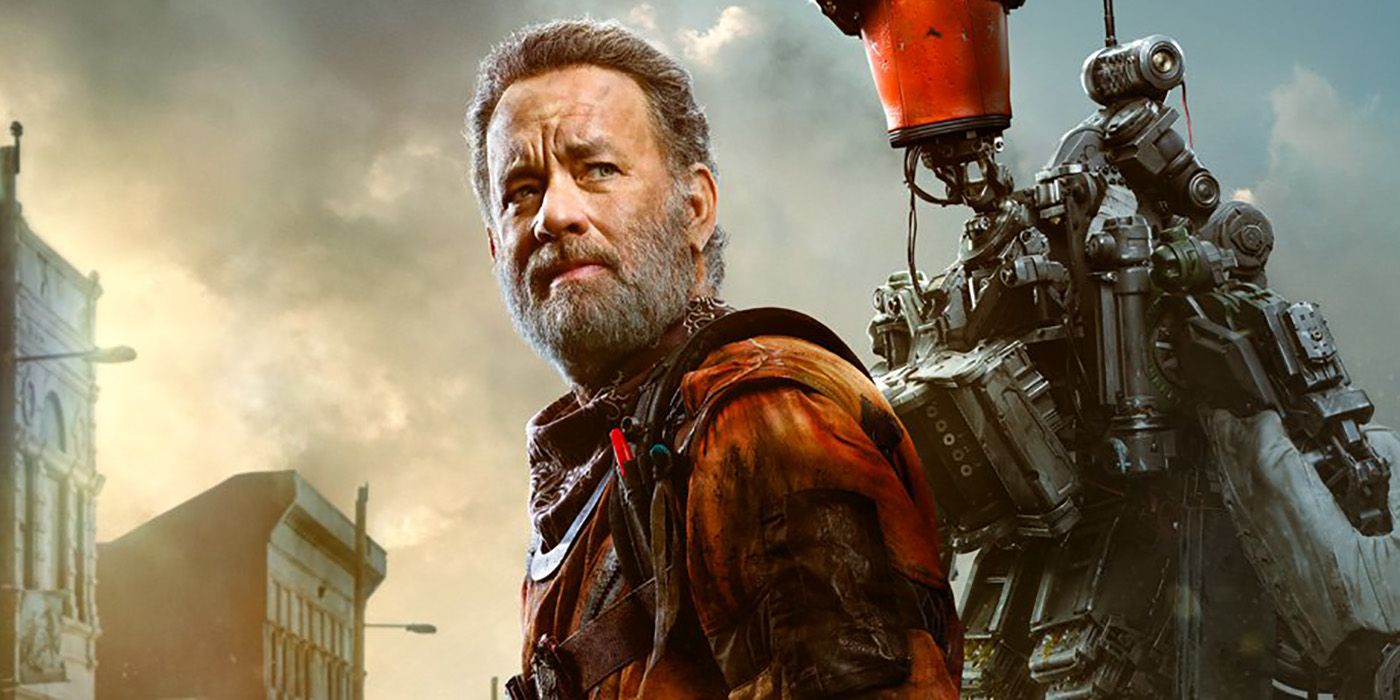 It’s hard to imagine that the pitch meeting for Finch, the new-post apocalyptic science fiction fable starring Tom Hanks, didn’t end with someone leaving the room in tears while phoning in a refill of their antidepressants.

Finch is the name of a robotics engineer (Hanks) who is one of the few survivors of a cataclysmic solar event that has left the world a desolate wasteland. Finch has been living in an underground bunker for a decade, building a world of his own that he shares with his beloved dog, Goodyear. The harsh effects of the ultraviolet rays have taken their toll on Finch and he’s living on borrowed time.

His solution is to create a robot, played by Caleb Landry Jones (The Outpost, Three Billboards Outside Ebbing, Missouri), to watch over Goodyear when he no longer can. As the trio embarks on a perilous journey into the American West, Finch strives to show his creation, who names himself Jeff, the joy and wonder of what it means to be alive. Their journey is paved with both challenges and humor—it’s as difficult for Finch to goad Jeff and Goodyear to get along as it is for him to manage the dangers lurking in the shadows of this strange new world.

Working from a script by first time screenwriters Craig Luck and Ivor Powell, Director Miguel Sapochnik (Repo Men) does excellent work with creating a frightening, fascinating “new normal” and sense of isolation, and Finch further benefits from impeccable production design by Tom Meyer (Real Steel, Orphan). The post-apocalyptic setting is very well established both visually and tonally, and it makes for an absorbing and at times even disquieting experience and we become immersed in Finch’s world..

The biggest obstacles that the movie faces are trying to balance the most appealing aspects of the story with the intensely bleak ones. Jeff evolves rapidly, but it’s largely believable. He’s a very lovable character thanks in no small part to an inspired voice and mocap performance by Caleb Landry Jones, who manages to make this unquestionably his movie despite never showing his face and playing opposite a two-time Oscar winner.

The robot’s human personality, childlike nature, insecurities and an insecure eagerness to please leads one to question whether he is an emotional and sentimental being like the droids in Star Wars. This is never really dealt with directly, which could be seen as major failing if you’re trying to view the Finch as a serious, real-world drama. But as a fable about the fleeting nature of life, love and what we leave behind, it works very well most of the time. Hanks has the sad, determined survivor routine down pat, channeling elements of his Cast Away characterization down to the weightloss.

While it is compelling and often moving, Finch does have moments where it feels a bit incomplete. Combined with a title change—the film was originally called BIOS—the relatively short runtime and the notable absence of a few cast members announced long ago leads me to believe that the story was streamlined in post production. The story remains focused and captivating, but its mix of sweetness to the point of being almost cute and draining-ly downbeat left me feeling vaguely troubled. Executive Producer Robert Zemeckis’ heavy influence hangs over the movie, with Finch trying to walk a line between optimism and despair before ending with a palpable, cautious sense of hope.

Finch is a buddy road movie that isn’t always a smooth ride, and it’s a bit too sad to be the big, repeat-viewing movie that the trailers had me hoping for. If it’s not quite among the very best, it’s certainly one of the most involving major releases of the latter section of the year. – Patrick Gibbs