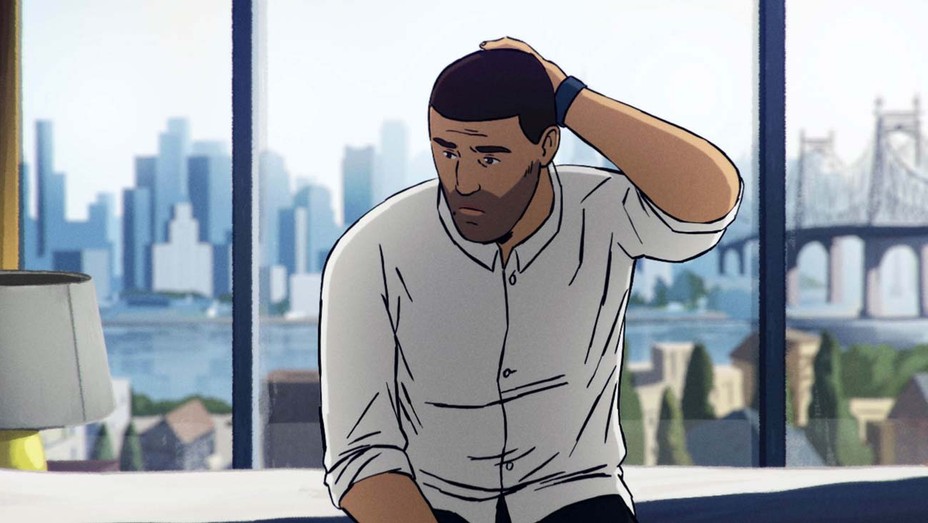 There’s not much I love more than a really great documentary, but if I’m being honest, I can’t watch too many of them in close succession, because the format quickly starts to feel stale to me. It’s not easy to find a way to break free of the conventions without letting it become an overpowering and gimmicky self-indulgence. But Flee, the first feature in this year’s festival to get bought by a major distributor, manages to find a bold new voice and style all its own, and it’s a sobering and unforgettable experience.

Flee tells the extraordinary true story of Amin, an Afghan refugee on the verge of marriage to his boyfriend, which compels him to reveal his hidden past. He agreed to tell a remarkable, personal narrative of persecution and escape on the condition that his identity not be revealed. As a means of fulfilling that wish, director Jonas Poher Rasmussen (What He Did, Searching For Bill) used gorgeous and haunting animation that ranges from straightforward to surreal imagery to not only protect his subject, but also to bring his remarkable tale to life, bending time and memory to recount a visceral, poetic and death-defying journey dictated by deception, lonelinessand a fierce and relentless will to survive. It’s a film about getting where you need to go, physically, emotionally and psychologically. It’s about picking up the damaged pieces of yourself and, when necessary, rebuilding them.

Rasmussen weaves together a stunning tapestry of imagery and memories, taking a story that is often deeply disturbing and finding a sense of beauty inside it. Flee is very bleak much of the way, not pulling any punches when it comes to chronicling and confronting Amin’s many demons, and there are moments where I just felt overwhelmed on both an emotional and a sensory level, but the sheer intensity and the need to find out what happens next made it impossible to turn away. Amir, who was grappling with trying to understand his budding sexuality in a country where homosexuality simply did not exist under penalty of law, has so much personal baggage that even now, some of it is still either at O’Hare International Airport in Chicago or somewhere over Guam. But given everything he’s been through, there’s no other way to put it than to say that it’s amazing he’s sane.

Rasmussen, who is close friends with the subject in real life, approaches the film and his friend with unwavering sensitivity while holding fast to his commitment to storytelling. Flee is a magnificent achievement in directing, and a genuine game changer for documentaries as an artform. It’s tempting to use the word experimental, but that implies a level of uncertainty to the process that simply isn’t there.

Flee was one of the first films to play in this year’s festival, and it very possibly has an appointment with a gentleman called Oscar in its future. Time will tell on that last point, but there’s no question that it’s going to be one of the movies that defines Sundance 2021 and will be talked about long after it’s over. –Patrick Gibb