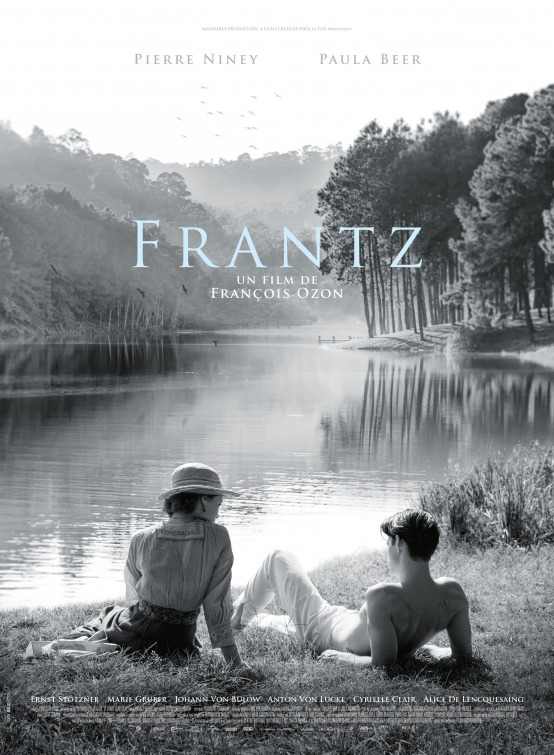 Even though the battlefield gets a combined total of five minutes’ screen time, Frantz is most definitely a war movie. Instead of dragging audiences through the filthy hell of World War I’s brutal trenches, François Ozon’s latest film quietly leads them through the aftermath of that historical conflict. The film’s meditation on regret, loss and nationalistic pride presents a haunting, albeit flawed portrait of post-war Germany.

From the film’s opening moments, we learn that the titular Frantz is dead—one of the countless German casualties in the first World War. When his fiancée, Anna (Paula Beer), visits his grave, she notices the presence of a Frenchman named Adrien (Pierre Niney), who is also paying his respects. Frantz’s grieving family welcomes Adrien into their home—though it takes some time for Frantz’s father, Hans (Ernst Stötzner), to come around. Like many German men after World War I, Hans fosters a deep mistrust for the French, a motif that Ozon builds upon throughout the film. As Adrien grows closer to Frantz’s family, he explains that Frantz and he became acquainted during one of Frantz’s visits to Paris. There’s a reserved, grief-stricken quality to Adrien’s presence in Frantz’s life that provides ample opportunity for the audience to interpret their actual relationship.

As the film starts with the revelation that its title character has died, Frantz begins to spin a narrative reminiscent of Hitchcock’s adaptation of Daphne du Maurier’s Rebecca. While the tone is much less malevolent, we’re essentially seeing a story that was triggered by the death of a would-be main character. It’s a thought-provoking look at how the death of one person has a way of bringing other people together, and Frantz’s legacy finds an unexpected longevity through Adrien’s relationship with the deceased’s loved ones.

In addition to the concepts of death and regret, Frantz’s steady, occasionally plodding pace offers the audience ample time to ponder the film’s other thematic elements. Most prominent is the nationalism that runs rampant in Germany and France. The outcome of World War I left Germany with a ravaged population, massive debt and a bruised ego, causing many Germans to revile anything that so much as smelled French. Adrien’s presence in Germany is not welcome, and though he views this harsh treatment as a kind of penance, the audience gets a firsthand look at the type of rampant nationalism that allowed Adolf Hitler to assume power. In many ways, this microscopic study of Germany’s xenophobic social construct after World War I is extremely relevant in the Trump era—all of that anti-French hate mongering started to sound a bit too familiar as the film went on.

It wouldn’t be surprising to see Frantz make the shortlist for the Academy Award for Best Foreign Film, though I’d like to see Paula Beer get some best actress love. Frantz is many things, but lively it is not—which is why Beer’s performance is so crucial. Her ability to steer Anna through German men lamenting their defeat and French men brooding over their regrets is what gives the film its heart and soul. Anna lets her heart guide her through such post-war bullshit, and she becomes a stalwart example of how to best negotiate a world filled with war, death and hatred. There may be one too many frightening similarities between 1920 Germany and modern-day America, but characters like Anna show us how to beat against the backward current to forge our own path upstream. –Alex Springer