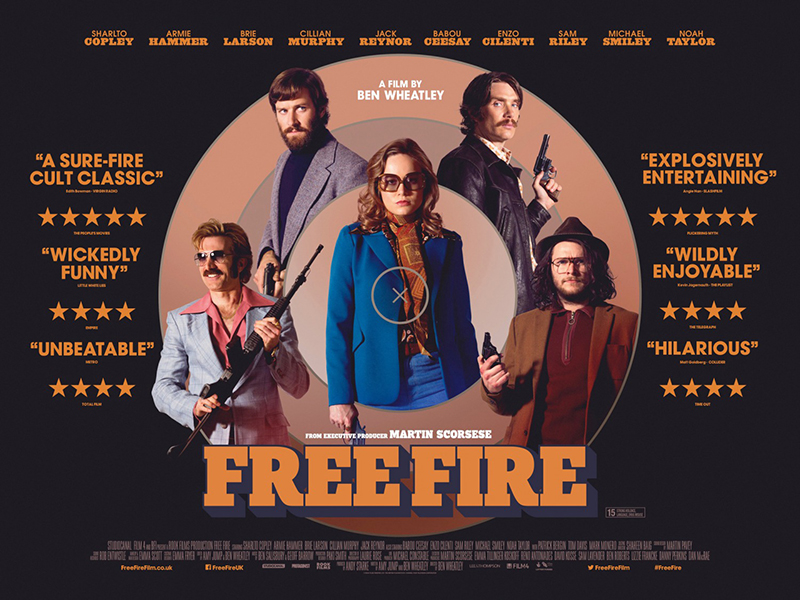 It’s interesting when I observe a film project and immediately think that it could perform well as a stage play on Broadway. I don’t mean this in the sense of The Phantom of the Opera or The Lion King—because sure, anything can be converted these days with sheer imagination. However, a project with an engaging story, memorable characters and a setting that rarely moves (if ever) throughout the journey is a rarity. Such is the case with director Ben Wheatley’s 90-minute dark comedy about a gun deal gone horribly wrong in an abandoned warehouse in the 1960s. On one side of the barrel, you have Cillian Murphy, Michael Smiley and Brie Larson ready for a purchase. On the other end, Sharlto Copley and Babou Ceesay are ready to sell. In the middle, Armie Hammer is more than ready to broker the deal. However, the latter 60 minutes unravel into an all-out gun fight with multiple gunshot wounds in need of medical attention. Amy Jump and Wheatley’s devilishly sarcastic script makes light of the situation at hand, but it’s the sound design that sets viewers directly in harm’s way. The time-period aspect is represented perfectly, even though the ultimate conclusion is fairly easy to guess well before the credits. It’s edgy, gruesome and an utter delight. While the cast is well crafted, the actions at hand outshine their performances. That’s not to say they are unable to perform their craft, but it’s hard to concentrate on an ensemble that is constantly dodging bullets every 15 seconds. With all of that on the table, if I’m ever in New York City, I can tell you right now that I wouldn’t be shocked to see tickets available in the heart of Times Square for a bloody good time. –Jimmy Martin