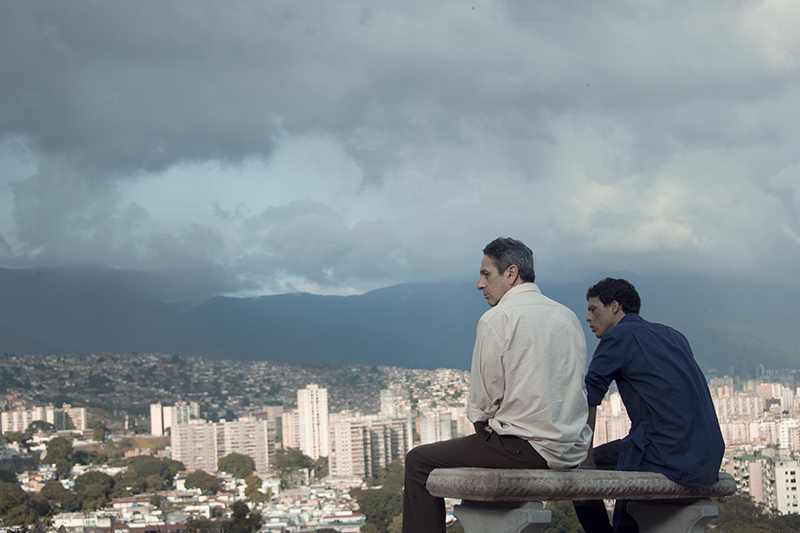 Set in Caracas, From Afar introduces us to Armando (Alfredo Castro) in action. A middle-aged denture maker, Armando is inscrutable and detached. He calmly cruises the streets of Caracas for young men, offering them money and taking them back to his apartment, where Armando instructs them to get into various states of undress. He never touches them, though—in the first scene, Armando asks the young man to continue facing away from him, holding his pants partially down, while Armando masturbates.

When Armando brings another street youth, the impetuous Elder (played by 21-year-old Luis Silva), to his apartment, Elder accosts Armando with several homophobic slurs before beating him up and robbing him. Armando, bruised but unfazed, seeks Elder out again, and after a few encounters, the nature of the relationship begins to shift into a friendship—a sort of unspoken partnership, almost. After Elder was severely beaten by his girlfriend’s brothers, Armando nurses him back to health, and soon, we begin to notice Elder’s ever so subtly growing attachment and uninhibitedness. Armando, meanwhile, remains wary and aloof—Castro’s restrained, unfaltering performance manages to impart an unnerving stoicism steeped in a sense of repressed anguish.

From Afar engrosses the audience with the many factors that come into play between Armando and Elder’s mismatched—and, perhaps, misguided—companionship. (In one particularly symbolic shot, we see two sets of dentures, one that looks like a regular and healthy set of teeth, the other rotten and misshapen.) There’s Armando’s sexual attraction to Elder, but there’s also the fact that Armando wields the most control and dominance in the two men’s power struggle. Financially, Armando is constantly providing for Elder, whether that is through home-cooked meals or a check. Then there’s the slight sense that Armando assumes somewhat of a parent/guardian role for Elder, whose own father is in prison. Armando is also alienated from his father, who appears to be a successful businessman of sorts, but their relationship—and whatever trauma took place—is the film’s most elusive layer of ambiguity, especially when Armando’s father ends up being one of the most crucial elements of the film’s narrative. Instead, Armando simply watches his father from afar and mentions that he wishes his father were dead.

Vigas incorporates several shots that capture life in Caracas—from street culture to homophobia—but each is simply included to offer further insight into the film’s core: Armando and Elder’s relationship. From Afar grips its audience in tense and silently jarring psychological drama, boosted by compelling performances from Castro and Silva. Bracing, probing and evocative, From Afar’s incorporation of shallow focus, bare-bones dialogue and suggestive shots brings an impressive clarity to an otherwise obscure story, as well as a remarkable understanding of Armando and Elder—two otherwise unknowable characters. –Kathy Zhou