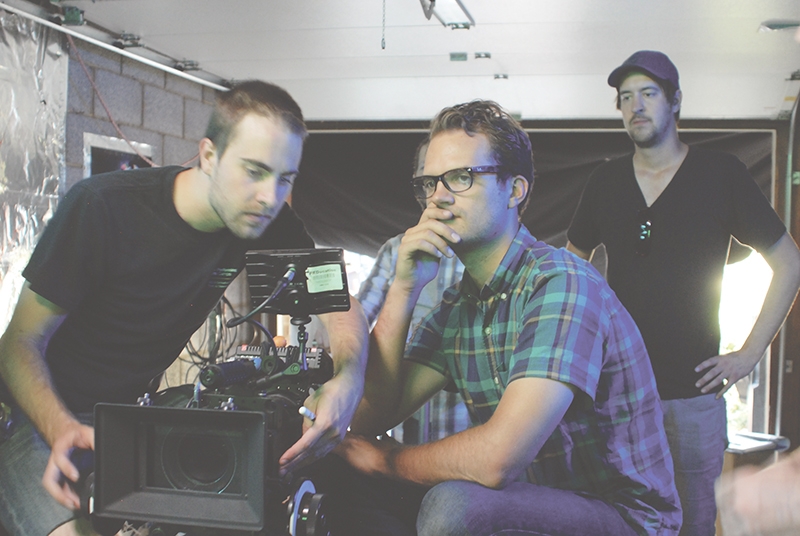 Getting To Point B

Gregory Lancastor and Erich Cannon live a cinematic existence. Their lives aren’t filled with vivid color, epic explosions, dramatic lighting or a poignant soundtrack. They just spend every hour and every dollar studying and making films. I met them at Broadway Centre Theatre where, not surprisingly, Long works. In the solace of this temple of film, Cannon and Long spoke about their new independent feature film, Point B, and the blood, sweat and tears that went into it.

Point B, starring the late David Fetzer, is “a stylized sci-fi comedy about four grad students who accidentally develop a crude teleportation device,” says Cannon, the film’s producer. Long, the director, elaborates: “It’s about these physics students who are trying to build a clean energy reactor in their basement, and they accidentally find out, through misuse of the machine, that they’ve built an incredibly violent and agonizing one-directional teleportation machine.” David Gitlin, the film’s writer, conceived the story of Point B. Though it takes place in the present day, the film draws heavily from a 1980s aesthetic. The look and feel of Point B is like a mash-up of Drive, Super 8 and Back to the Future, with an ’80s-influenced electronic soundtrack and neon titles, moody and atmospheric cinematography, campy adventure and an actual DeLorean. This wasn’t an afterthought, but a result of a music binge that ended up informing the style of Point B. For Long, the music of ’80s electro revivalists such as Lazerhawk and Powerglove conjured images and feelings that would make Point B complete. “It was the missing piece for the movie,” he says.

This is Cannon and Long’s first major full-length feature film of their own, but they have both been steeped in the Utah film scene for years. Long, who grew up in Park City, has been making shorts and studying film formally since high school. He majored in film production at the University of Utah and went on to teach film at Spy Hop Productions in Salt Lake. He shares six years of experience working with Point B’s director of photography Sean Bagley, who is currently studying at the American Film Institute. Cannon, a Seattle transplant, built his movie expertise by working as a production assistant on Utah sets for bigger-budget films such as 127 Hours, Saints and Soldiers and Darling Companion. After spending the last few years struggling to make his film Red Coral, set in Taipei, Long decided to postpone production to focus on something he could make here and now: Point B.

Due to proximity and budget constraints, the filmmakers chose to shoot Point B in Salt Lake City in the summer of 2012. To fund the project, Cannon and Long supplemented their out-of-pocket money with crowd funding, favors, a whole deck of maxed-out credit cards and generous donations by friends, family and crew. Long had cast local up-and-coming actor Fetzer, who had recently starred in Kenny Riches’ Must Come Down, as Point B’s protagonist, Mark McConnel. “He was the best local actor that I knew,” says Long. “He was perfect for the role … he’s one of the strongest parts of the movie.” Logan Long, the director’s brother and production designer, built the basement lab and ominous homemade reactor. For the soundtrack, music was donated by the artists who inspired the film—Lazerhawk, Powerglove, Mitch Murder and FM Attack, to name a few—and composer Leeland Campana created an original score based around the ’80s electro vibe.

After 15 days of shooting, post-production began in September 2012. But in December, the tragic death of Fetzer shook Salt Lake City and the crew of Point B. “It took the wind out of everyone’s sails,” says Long. “It definitely shut everything down—for four months.” Once the immediate devastation cleared, Cannon and Long were determined to finish the film, which they would dedicate to Fetzer. With backers from their Kickstarter campaign and donations from Fetzer’s mother, who greatly supported Point B, Cannon and Long were able to finish editing the film and send it to a colorist and sound designer.

Now, the two are busy marketing the film, and are pushing to get it into film festivals. Point B will be shown to the public for the first time at this year’s Salt Lake City Film Festival on Sept. 29, 7 p.m. at the Broadway Theatre, though an official premiere date is pending. Point B is a collaboration between dozens of immensely talented and driven individuals, but the fact that Point B is Fetzer’s last film makes it that much more special. “[People] are going to see a part of David’s life that they’ve never seen before,” says Cannon. This year’s SLCFF will be the first since Fetzer’s passing, and the Salt Lake film community plans to honor his legacy as part of the festival. “One of the best ways we could do that would be to show his final film,” says Cannon.

For now, the creators of Point B are dedicated to showing the world their sci-fi comedy, but for Cannon and Long, Point B is definitely not their denouement. Cannon says that in the film business, you’ve got to have at least one script in your back pocket—“and we’ve got full pockets,” says Long.

Visit facebook.com/pointbmovie for up-to-date info on the film’s progress and go to slcff.org for tickets and more information on the Salt Lake Film Festival.