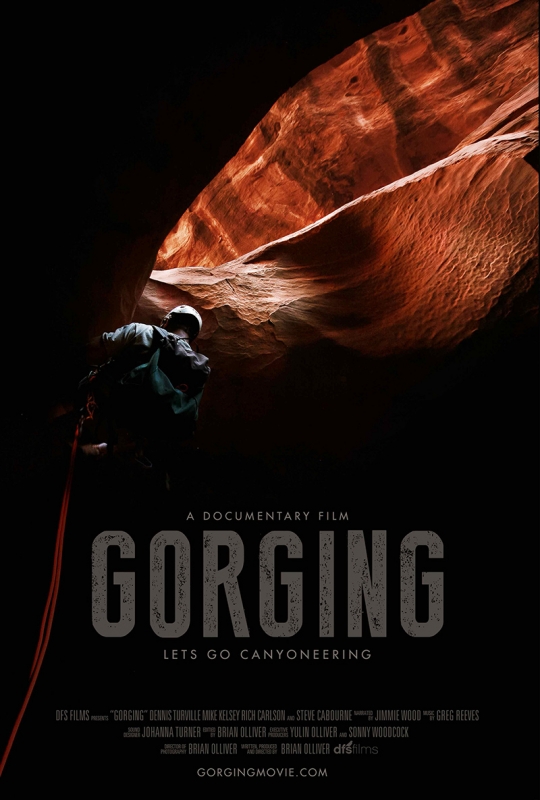 On Wednesday, November 20, Brewvies hosted a sold-out screening of Brian Olliver’s canyoneering documentary, Gorging. Aside from being a visual feast, Gorging provides a thrilling glimpse into this exciting and somewhat unknown sport.

Canyoneering, for those of you aren’t in the know, is a means of exploring canyons by a combination of climbing, rappelling and swimming, aka hiking on steroids. The sport first appeared in the 1970s and gained notoriety in the mid 1990s with a series of unfortunate accidents. Remember Aron Ralston?

The documentary focuses on explaining canyoneering through the various perspectives of Dennis Turville, Michael Kelsey, Rich Carlson and Steven Cabourne. While all four men each share a love of canyoneering, they differ greatly in the roles they play with respect to the sport.

Canyoneering pioneer Turville highlights the early days, and does an amazing job at explaining the initial passion and thrill for exploring remote canyons along the Colorado Plateau. Guidebook author Kelsey explains his passion for sharing the locations of previously unknown canyons throughout the Four Corners region. Although his books are immensely informative, they have also caused controversy among various groups for their popularization of (for lack of a better word) “secret” spots.

As a result of media coverage, the Internet, and Kelsey’s books, more people became interested in canyoneering than ever before. Recognizing the need for training and safety in the sport, Carlson founded the American Canyoneering Academy (formerly the American Canyoneering Association). Throughout the film, Carlson promotes safety, self-reliance and ethics through education. And lastly, there is California recreationalist Cabourne. The purpose of his story in the documentary is to bring everything full circle. Cabourne represents the emerging enthusiasm spawned into canyoneering through influences like Turville and Kelsey, trained by Carlson.

This engaging documentary is sure to ignite a new wave of interest in the sport, as well as start a discussion among the community with regard to canyon preservation and canyoneering ethics.