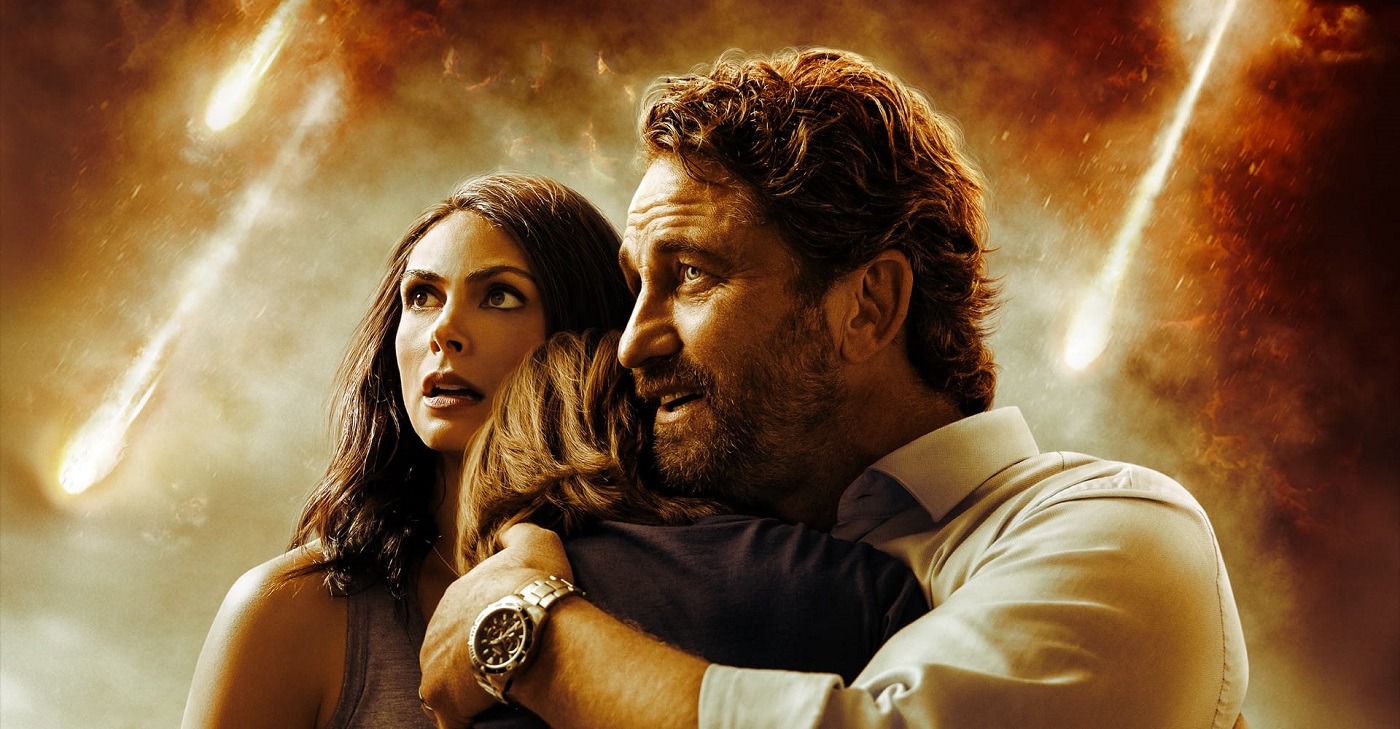 It’s always been a bit strange to me when the end of the world as we know it is thought to be a fun premise for a blockbuster—2012 and especially Knowing being  prime examples—but of all the times that I haven’t been in the mood for “what if one day civilization and all as we know it life was  destroyed?” as escapist fare, I think this year takes the cake.

Greenland is the newest “object hurtling toward earth” movie (because 1998 was over twenty years ago), and it’s time to remind audiences how loosely the term “entertainment” can be applied to film.

John Garrity (Gerard Butler, 300, Olympus Has Fallen) is a structural engineer living in Atlanta, Georgia, with his estranged wife, Allison (Morena Baccarin, Firefly, Deadpool) and their diabetic son, Nathan (Roger Dale Floyd). He returns home from work to reconvene with his family and prepare to host a party with their neighbors to watch the passing of a recently discovered interstellar comet named Clarke. But while he’s out shopping for beer, John gets a Presidential Alert on his phone telling him that he and his family have been selected by the government to take shelter in an underground bunker and that they can’t take anyone else with them (“I’ve got a golden ticket!”).

He  rushes home to the party just as a comet fragment enters the atmosphere on live television. A shockwave rattles the area and blows out windows as the fragment, previously anticipated to land near Bermuda, vaporizes Tampa, Florida, and most of the state around it. John and the fam rush to pack up and leave, but before they can pull out, their neighbor warns them that Clarke is actually a giant cluster of objects that are expected to bombard Earth over the next two days, with the biggest fragment expected to cause an extinction-level event.

If given the choice, I would happily listen to a six-hour Nickelback concert with special guest artists Neil Diamond and Jar Jar Binks than endure five more minutes of Gerard Butler doing his “American” accent, and the one level on which I absolutely loved this film is that director Ric Roman Waugh decided that there was no reason why Butler’s character couldn’t just be Scottish. I’ve been complaining for years that this applies to 95% or more of Butler’s films, and that his Scrooge McDuck brogue is more than half the reason he has a fanbase. Sean Connery didn’t have to do a fake accent. Arnold Schwarzenegger just had an American name in everything and it was a non-issue—let Gerry be Gerry. When Greenland ended, the credit “produced by Gerard Butler” came up and I understood why it was allowed this time, and frankly, I applaud him for being the one to address at least one of his limitations.

Director Ric Roman Waugh (Snitch, Angel Has Fallen) actually does quite well with the visuals and the basic pacing of the film, building the tension and avoiding making the action too frenetic to follow. It hardly establishes him as a master filmmaker, but it’s crafted with a lot more skill than I expected it to be. The script, by Chris Sparling (The Sea of Trees) falls more into the “could have been a lot worse” category. It has plenty of silly moments and corny dialogue, but it’s structured coherently enough. This is pretty faint praise, but it’s a step up for movies of this type. The effects look good, but it’s nothing we haven’t seen numerous times before.

Sadly, that pretty much sums up Greenland in a nutshell. It feels utterly redundant and unwelcome, and yes, it’s better than it could have been, but that still doesn’t answer the nagging question: Why bother to even make this? –Patrick Gibbs