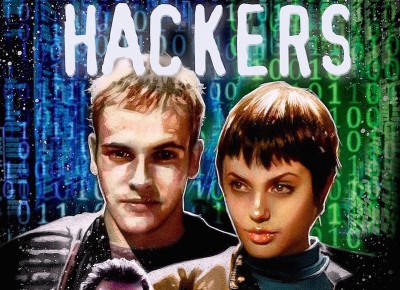 I feel quite privileged to be at the age I’m at, to have been able to see the Internet rise and learn hacking at a time where it only got me suspended from junior high for a week and not arrested (true story). Back then, we had no idea what we were getting ourselves into, let alone what the Internet would become two decades later. And while we can make fun of the fact that it’s basically a giant hub for anime fan fiction, a laundry list of angry commentary about everything, and the world’s biggest porn stash—in 1995, there was only wonderment and exploration. It was like being on a nerdier version of Star Trek—no, I take that back—Firefly. Internet cowboys in cyberspace.

And that viewpoint is what makes Hackers a gem in anyone’s ’90s film collection. Through the eyes of director Iain Softley, we’re given a colorful cyberpunk landscape where the Internet wasn’t just boring Matrix code or whatever the hell that virtual world was in Johnny Mnemonic. It was an open-ended universe where you could go anywhere and mess with anything, all leaving your own personal branding on files and programming to chat boards and status codes. We all know today that giant computer server rooms don’t look like a display panel whatever late-night movie you may have watched, but back then we didn’t know any better and it was fucking cool to imagine that world being as awesome as we thought it could be.

The 1995 film, featuring the awesome talents of Jonny Lee Miller, Angelina Jolie, Matthew Lillard, Laurence Mason, Fisher Stevens and even Penn Jillette, is a testament to ’90s films, both for the camp value and for the experimentation. Everything from the flow of the plot to the music choices to the costuming feels just a half-step off beat from everything else out there at the time—enough to grab your attention but not so much as to push you away or be unattached to the basics of filmmaking. It is very much a film of its time, meaning that while it’s re-watchable and enjoyable, you do feel like you’re watching a bygone era. Kind of like watching Easy Rider or Purple Rain, it is so ingrained within a certain time period, you can’t help but appreciate it and laugh at the same time.

Shout! Factory has done us the great service that MGM didn’t bother doing for 9 years—releasing the film onto Blu-Ray. Comparing it to the DVD release and a VHS copy, I can attest that it’s the cleanest the film has ever looked, as the colors pop and the vibrant worlds they created “online” show up great. Sadly, the film is only in Dolby Digital 2.0, when the 1998 DVD release had it in 5.1—a big misstep that, while forgivable, does hurt the quality when watching it. Beyond the film are a small selection of special features, mainly focused on lengthy pseudo-documentaries with people involved with the film. It includes real hackers who were consulted, the director, several crew members who have their perspective on creating the look and feel of this universe, and an overall guide as to what the film was trying to convey as far as a message and a feeling.

The real bummer is what’s missing, or more what it’s lacking. For example: Lillard, Stevens and Jilllette are the only actors featured at all in any of the featurettes—no interviews with the two main stars. I get why no Jolie, but hell, Miller couldn’t spare an hour from filming Elementary to talk about the movie that made him? Another missing element, the fake trailers that audiences saw in previews before the release, making you believe the reel had somehow been hacked to air a different trailer. As ridiculous as it sounds in a film-based era, it was highly effective. Finally, the soundtrack, one of the key elements to the film and what is highly regarded as one of the best film soundtracks of all time … was grazed over in a couple of minutes and not even included as a special feature or bonus disc. Such a shame.

Overall, this anniversary edition is well worth the cash, even with the missing material. The film is still fun and cool to watch. Even if the Internet is a completely different juggernaut than what we thought it would be in its infancy, it’s still cool to think that Zero Cool and Acid Burn are out there hacking the planet for all the free information we deserve.