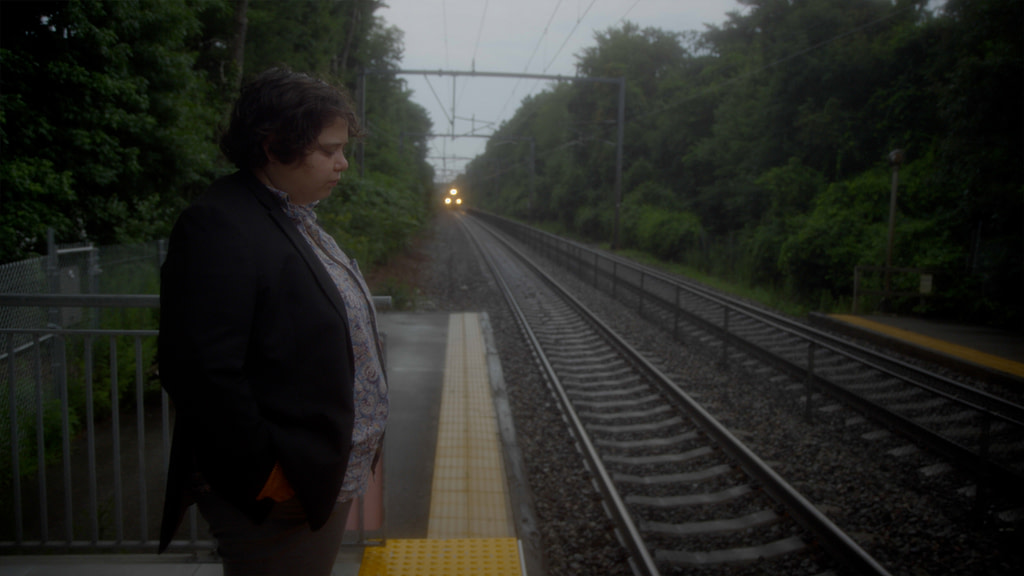 Hannah Ha Ha is a fairly unassuming movie on the surface. The film is directorial duo Joshua Pikovsky and Jordan Tetewsky’s entry for the 2022 Slamdance Film Festival, an event that has championed low and no-budget films since 1995. The movie is a slim 75 minutes long (with credits!), and features a very small, very talented cast. While the narrative’s modesty is charming, there is a hidden subtlety and depth to this movie that makes it stand out from a lot of other festival fare.

The dramatic focal point of the film is mundane and extremely existential for a person in their mid-twenties—Hannah’s (Hannah Lee Thompson) 26th birthday is just around the corner, which means her time as a dependent on her father’s insurance policy is coming to an end.

This doesn’t seem to bother Hannah all that much; she’s fairly content with her life—running around and doing odd jobs in her quiet, Massachusetts town. She spends her afternoons caring for her mousy father and her evenings drinking around a campfire with a small group of close friends. When Hannah’s older brother Paul (Roger Mancusi) stops in for dinner one evening and not-so-subtly hints that she needs to start thinking about her future, it leads to a lasting discomfort as Hannah spends the rest of the movie trying to find a job with a little more stability.

Paul is a career-motivated young professional (as evidenced by his portable, standing desk he brings with him when he visits his family), and him and his girlfriend Caitie (Betsey Brown) speak in cliches and banal platitudes—“market based solutions” and “innovative potential” are their contributions to what would otherwise be normal table talk. These two elicit the eyerolls you’d expect from viewers, but Hannah seems genuinely shaken by them.

It is somewhat unclear what this father’s deal is. For the bulk of the movie, he appears as a quiet, quirky guy. However, there is a sequence—which happens to be the only scene I didn’t like—where he makes a spontaneous decision to go on a walk by himself that leads to somewhat funny, low-stakes consequences. His behavior in this scene suggests that there could be something a little more complicated going on with him neurologically, but this is never explored. The inclusion of this moment colors the rest of his performance, as it calls into question whether or not we should be laughing at his idiosyncrasies.

It only becomes apparent near the end of the film that Hannah and her brother actually have a decent relationship, but just have two very different perspectives on what constitutes a good life. Paul means well in looking out for his sister’s future, but he, inadvertently, causes her a great deal of anxiety and a resulting rift in their relationship. Their final scene together demonstrates their complicated relationship and is one of the film’s highlights.

There is a brief scene in the middle of Hannah Ha Ha that encapsulates the film’s overall thesis. During a smoke break at a fast food gig she landed, Hannah stands outside the restaurant and contemplates her surroundings. She’s working at what appears to be a strip mall next to a busy road, so there’s not much to look at; still, her eyes wander to the other swing-shift workers going about their nightly routines as they take out trash, eat in their cars on break and blow leaves out of the parking lot.

The entire time, as she takes drags from her cigarette, Hannah is unreadable, unclear whether she’s admiring the simplicity of the milieu or if she’s taking in the prospect of this being her permanent existence. Is she happy or just comfortable? By the end of the film, we don’t really get an answer.

Hannah Ha Ha is a film that doesn’t really come to any conclusions about anything, but maybe that’s the point. Life is ultimately an exercise in futility, so why spend it despairing over someone else’s definition of success? What even is success when trying to attain it makes you miserable? To use the words of Hannah’s cool, radio-host uncle, “What do you need a real job for?” –Brandon Ermer