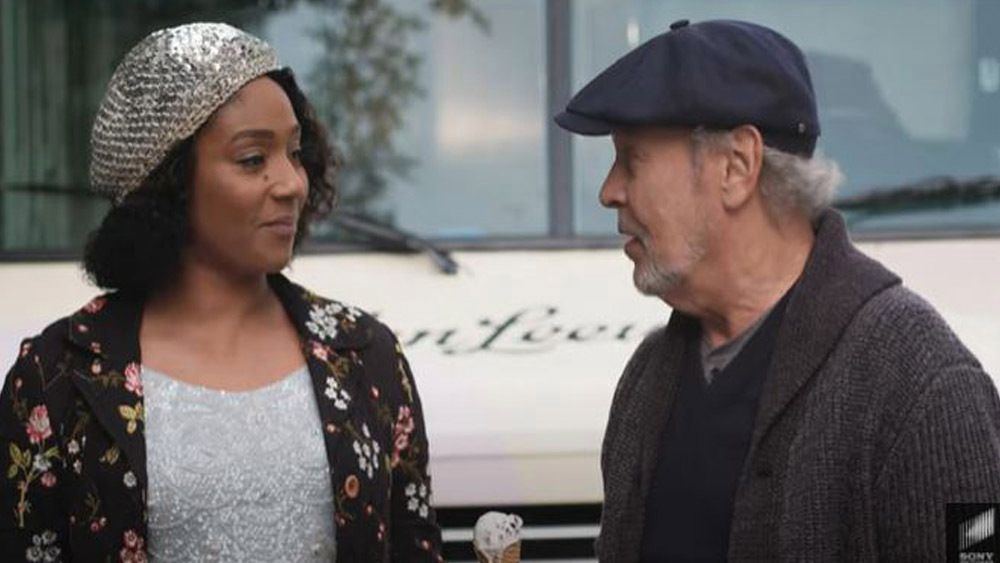 The difference between a great drama and a weepie is sometimes a fine line and, at other times, is glaringly obvious. Webster’s Dictionary traces the first use of the term “weepie” back to 1929. Most of the sentimental tropes, stock characters and a lot of the jokes in Billy Crystal‘s saccharine and schmaltzy new film Here Today go back at least that far.

Crystal (City Slickers, When Harry Met Sally…) stars as veteran comedy writer Charlie Burnz, who forms an unlikely friendship with New York singer Emma Payge (Tiffany Haddish, Girls Trip, Night School). Emma—the unlikely recipient of a prize to have lunch with the comedy legend, despite not knowing who he is—gets off to a rocky start with Charlie. But before long, each finds in the other a sort of platonic soulmate, forging a deep bond that kicks the generation gap aside and redefines the meaning of friendship, love and trust. Emma enters into Charlie’s life a moment too soon, as he is about to face one of life’s most devastating battles as he is diagnosed with dementia with no chance of recovery or even an Oscar (because Anthony Hopkins beat him to it).

Crystal, who co-wrote the screenplay with Alan Zweibel (Saturday Night Live, It’s Gary Shandling’s Show), might have given a great performance in Here Today if he had not chosen to direct himself, and may well have made for a more focused director if he wasn’t starring in it. But he’s spread too thin, and the movie suffers from it. The chemistry between Crystal and Haddish is genuine, and even if most of the overtly comedic moments fall pretty flat—especially the cheap, over-the-top slapstick sequence where they first meet and she has an allergic reaction to seafood—they are far better together when they are being cute and charming than when they are trying to be hilarious. Emma is a street singer, and Haddish particularly shines in the performing sequences.

While Crystal has always been at least as much a funnyman as he an actor, one of the biggest failures of the film is one that we see far too often in show-biz movies. Charlie writes for a sketch-comedy show, and there’s a lot of “what’s funny, what’s not” debate reminiscent of Studio 60 on the Sunset Strip. The problem is that literally none of it is funny, to the point where it becomes embarrassing, especially given that Zwiebel is one of the original SNL writers behind some classic sketches and characters.

The dramatic elements of the film are often forced and recycled, with the characters of Charlie’s adult children, Rex (Penn Badgley, Forever Strong, Easy A) and Francine (Laura Benanti, Supergirl), being the same same distant son and angry, uptight daughter that we’ve seen of dozens of movies about estranged relationships. Worse are the flashbacks to Charlie’s memories of his wife, Carrie (Louisa Krause, Billions) which are poorly staged. They feature Carrie talking to the camera and Crystal’s voice coming from offscreen.

Krause is great, but the supposed spark between her and Crystal is completely absent, and I didn’t buy it for a moment. There’s one tragic element too many at play in this story. But with all of that said, I can’t deny that I cried at Here Today because I’ve lived through the nightmare of a parent with dementia. Even when it’s not done with the raw, painful brilliance of The Father, it’s still an extremely emotional subject. But pulling the heartstrings like a puppeteer doesn’t make for a great film.

There’s enough in Here Today to enjoy if you’re the kind of person who likes pop melodrama and a good cry, and I’m actually not knocking that. It’s a decent movie that plays well enough, but it’s subject matter that deserves more heartfelt and honest treatment. Somewhere, there’s the premise that there’s a great movie hidden under a lot of schtick and worn-out plot devices. –Patrick Gibbs